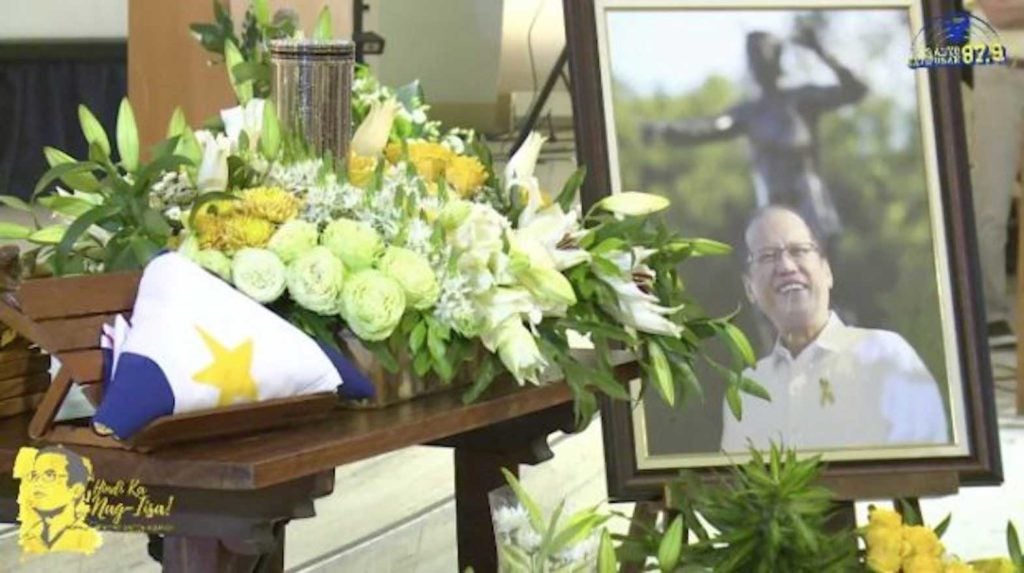 At the wake for former President Benigno Aquino III. INQUIRER

I was stunned and saddened to see the passing of Benigno Aquino III. As a “junior,” myself, I felt an extreme sense of compassion. Aquino  was more than a “June.” As a full third, No. 3, or III, he was conferred the extreme responsibility of legacy.  Is there anything more burdensome than to have no less than the idealistic brand of Philippine democracy and freedom as your very identity?

This was not like putting the name “Trump” on a glass building a  golf course, or a piece of dry-aged meat. This was way more than that. This was the brand that the hopes and dreams of Filipinos in country, and in diaspora, depended on as the hopeful embodiment of a free, independent, and fully functioning democracy in service to its people.

And yet, considering the years of democracy’s dysfunction in the mother country, could the Philippines ever really reach a level where it would achieve that ideal state of state?

Do we even begin to speak of an end of “inequality” in the land of oligarchs and cronies that easily could model for the U.S. how that corruptive form of democracy can exist.

Indeed, after his mother, Corazon carried the mantel for his father, the hero, Benigno Aquino, Jr., could III, do anything that could match that all too momentary state of perfection his mother brought to the country? That would be when the Philippines went from Marcos to Cory with a little help of that flood of humanity—the history making “People Power.”

We knew it was a special  moment, were only it not so fleeting.

Still, what possibly could  a son do for an family encore when Cory herself was imperfect during her years in office?  People power got the Philippines out of martial law. That was ginormous. But were they then able to remake the country into the kind of democracy we had all hoped for?

Sadly, as we have seen, that’s a long-term project that will take more than the Aquinos.

So in our assessment, let’s cut Noynoy, or Pnoy, some slack. He did what he could. And the significant thing that even American Filipinos notice is when he stood up to China’s sabre rattling in the Spratly Islands.

Most people don’t know about the Spratlys, or the West Philippine Sea. On the map it gets obscured. Isn’t that the South China Sea? Are those islands, essential military squares on the world’s chessboard, even a worthy thing?  Of course, they are. And this was where Pnoy made his mark. Going face to face with China is no small thing. Seeing images of an undersized Philippine Navy in an old vessel standing up to the China behind a Philippine flag was the maritime version David and Goliath.

Or maybe the Tiananmen Square man standing up to Chinese tank in Beijing.

The symbolic gestures of Pnoy’s political and legal maneuverings showed the world the country could hold off the Chinese in the name of name of Philippine sovereignty.

A big deal. During that fight, I remember trying to do what I could as an American Filipino consumer. Could I stop using Chinese goods? Could I do a personal protest of Chinese products? Boycott?

Of course, realistically, could you stop using Apple products? Stop going to Walmart? Stop buying cheap clothes and products made in China that enable U.S. consumerism?

For the most part, the answer is no.Good thing Pnoy wasn’t relying on me. Or us.

But putting it all into consumeristic terms shows how China is part of all our lives, whether we like it or not. And that we must consider it all. The world has a say if China starts making moves on the world stage that belongs to the Philippines. The Philippines definitely has a say. It took Benigno Aquino III, a certain kind of politician and a patriot true to his country to stand tall.

For a real contrast, compare Pnoy with Duterte whose tilt to China represents the sad reality of a real regression.

And what kind of China are we facing today? The China that recently shut down press freedoms in Hong Kong is indicative of China’s desire—its unrelenting march to being the authoritarian world power.

Pnoy’s  spirited fight for the Spratlys is but an historical memory as the  Philippines seems all too willing to bend and bow to China.

For Aquino, standing up to China was his big  moment.  Let’s hope all the ruling class, the Phil-Pols and Poligarchs, remember Pnoy’s act of brave and courageous leadership.

As democracy sputters along, we can always use a shot of the nationalistic pride in the Philippines. Benigno Aquino III got that right when he stood up to the landgrab of China.

Emil Guillermo is a journalist and commentator. He writes a column for the Inquirer’s North America bureau.  See his vlog at www.amok.com; Twitter @emilamok