A member of the right-wing Oath Keepers militia group is due to plead guilty on Wednesday to charges related to the Jan. 6 attack on the U.S. Capitol by supporters of then-President Donald Trump.

The man, Graydon Young, is one of 14 members of the Oath Keepers group charged with crimes including conspiracy and obstruction of an official proceeding for taking part in the assault on Congress, which left five people dead, including a Capitol Police officer.

A court filing said a “plea agreement hearing” is scheduled for Wednesday, but did not specify to which charges the 54-year-old resident of Engelwood, Florida, will plead. Young is the brother of Laura Steele, 52, of Thomasville, North Carolina, who also faces charges in the case.

More than 480 people have been arrested and charged with taking part in the unrest, which saw rioters smash windows, battle police inside and outside the Capitol and sent lawmakers and then-Vice President Mike Pence into hiding.

Another defendant, Robert Reeder, pleaded guilty on Wednesday to one misdemeanor charge of parading, demonstrating or picketing in a Capitol building.

A judge on Wednesday is also scheduled to hand down the first criminal sentence to one of the Capitol rioters. Anna Morgan-Lloyd, 49, of Bloomfield, Indiana, agreed last month to plead guilty to a single charge of parading, demonstrating or picketing in a Capitol building. Federal prosecutors have recommended three years of probation, a $500 fine, and 40 hours of community service. 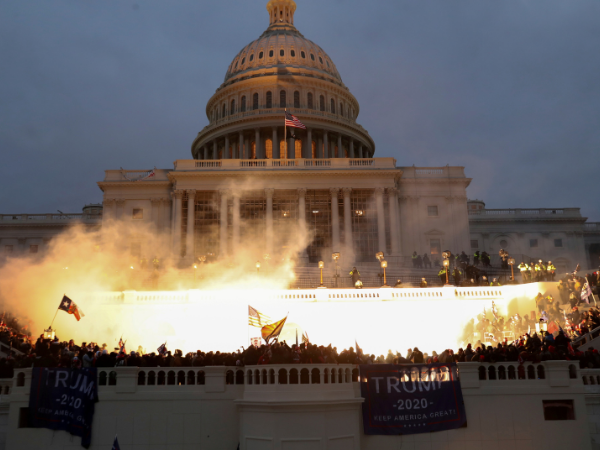 An explosion caused by a police munition is seen while supporters of U.S. President Donald Trump gather in front of the U.S. Capitol Building in Washington, U.S., January 6, 2021. REUTERS/Leah Millis

“There is no evidence that the defendant poses a continuing threat to the public or that she will engage in similar conduct in the future,” prosecutors said in their sentencing memo, adding that a three-year probationary term will place her under government supervision “for a significant period of time.”

The riot followed a fiery speech in which Trump repeated his false claims that his election defeat was the result of widespread fraud and disrupted the formal count by Congress of electoral votes in the race.

Federal prosecutors said in court papers that Young on Dec. 22 made plans to fly from Florida to North Carolina on Jan. 4, with a return trip on Jan. 8. On Dec. 26, prosecutors said, he wrote to a Florida company engaged in firearms and combat training: “I have joined Oath Keepers. I recommended your training to the team. To that effect, four of us would like to train with you.”

The indictment says Young and eight other indicted Oath Keepers pushed their way in a “stack” up the steps on the east side of the Capitol building.

His plea hearing is scheduled for 2 p.m. on Wednesday.

The Oath Keepers are a loosely organized group of activists who believe that the federal government is encroaching on their rights, and “explicitly focus” on recruiting current and former police, emergency services and military members.

Reeder, a 55-year-old Maryland resident, pleaded guilty to one misdemeanor charge of parading, demonstrating or picketing in a Capitol building. He faces a maximum of six months in prison.

During a court hearing, Reeder’s attorney stressed that his client “didn’t touch anything” or “destroy anything” or “physically engage in any kind of resistance” while he was inside the Capitol.

Reeder told the judge he used to work for the U.S. Transportation Security Administration, but since he was charged, he was not been able to work and has been forced to rely on random “odd-jobs” such as painting a friend’s house. “My security clearance was revoked,” Reeder said.