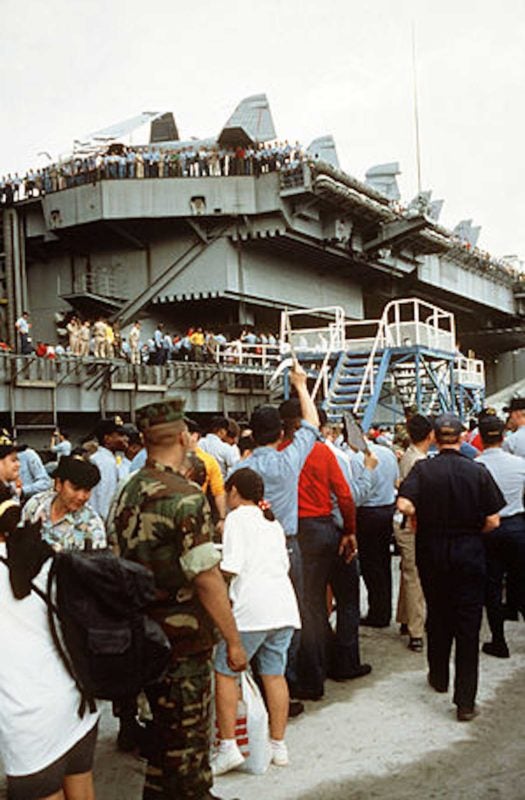 U.S. military personnel and their families being evacuated amid the eruption of Mt. Pinatubo. WIKIPEDIA

Circa June 15, 1991. My wife had run into the Quik Mart to pay while I pumped gas on-base (USD$0.94 or 0.97 a gallon, or 4 liters, tax-free, if I remember right) when we both noticed little brown spots on each other’s white T-shirts. “What the heck is this”? First, they were just little water droplets that slowly turned brown. Then, the drizzle got thicker and bigger, and heavier. And just like that — it was raining mud! Big globs of it!

For the past several days, we had been watching the billowing clouds of smoke of Mt. Pinatubo from what turned out to be the false-security of Kalayaan base housing up in Cubi Point. Surely, we should be okay — the slowly- threatening volcano in Zambales was 3 hrs’ drive away from Subic U.S. Naval Facility in Olongapo where I was stationed. (Of course, it turns out — it was much closer, only 43 to 45 kms. away, “as the crow flies”).

But that day, “reality” jolted us. Later, we would find out that the “catastrophic stars” aligned. Typhoon Yunya (Typhoon Diding, locally) with winds of 140-145 kph made landfall in Luzon just as Mt. Pinatubo unleashed her 500 years of pent-up anger.  And less than 14 kms away from her peak was Clark Air Base in Pampanga, then the largest USAF base outside the U.S. mainland.

Typhoon Diding’s violently swirling rain met up with Pinatubo’s escaping powder-fine cloud of sulfur, toxic metals and assorted minerals, creating a 60,000 ft. tall “blender” of concrete-like pyroclastic mix that it splattered and spewed for hundreds of kilometers around it.

The slippery, slimy drive up the zigzag mountain road’s switch-backs felt like going through an automatic car wash with the windows down, only with warm mud slapping our face instead of cold clean water.  We had rolled the windows down to scoop up and wipe off the geologic gunk from the windshield by hand while driving so we could see and not tumble or slide down the 400-600 ft roadside ravines on the way up Kalayaan.

As soon as we got home, I connected two 50-ft garden houses together, turned it full bore and rushed it by the main road to blast water on the fast-hardening mud off passing vehicles’ windshields to let the drivers see, if only barely. Soon, I had a line of cars forming to get that seemingly precious gush of clearing water. The passing fellow-sailors and marines were very grateful, many saying they are going to do the same for others passing by when (and if) they ever got home.

After what seemed forever, I lumbered home tired, sore and wearing so much lahar mud head to foot, I frightened my two young kids. “It’s NOT Sasquatch! It’s okay! It’s ME — Daddy”! Sadly, Janie and little Kevin were not quite convinced.

This was Olongapo’s and Subic Base’s “first contact” with the foreboding calamity, and many then realized we were not far enough away from the volcano. This was just the beginning.

(A.A. Gener was a Hospital Corpsman, or Navy medic, at Ward Bravo, Subic Naval Hospital. He enlisted from The Philippines, and is now a medical doctor living in Australia).