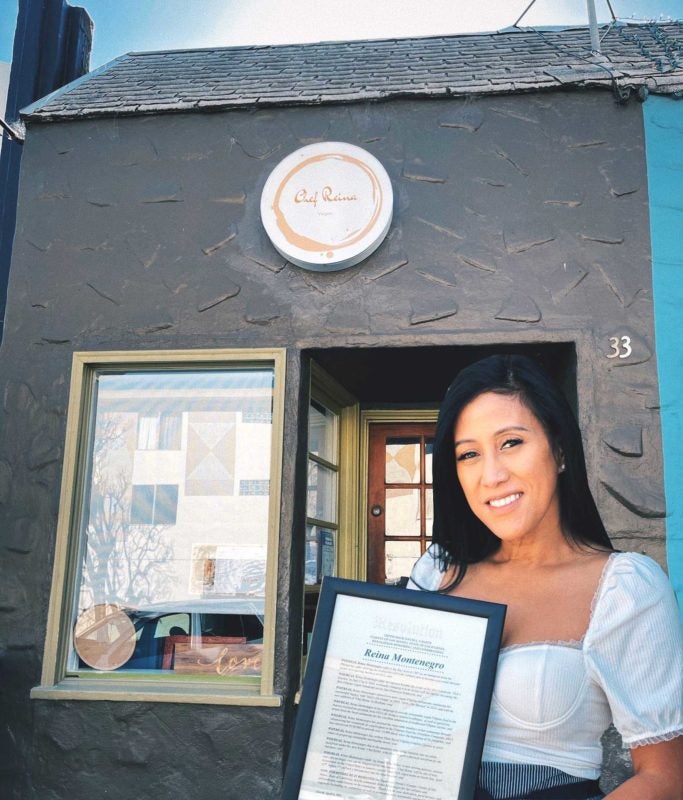 The brick-and-mortar storefront expands on her existing online service where patrons can order dishes that don’t look out of place in any other regular Filipino restaurant.

She even offers sweet and sour bola bola, and favorites that have luncheon meat such as silogs and fried rice.

Only here, the dishes are all vegan.

Sandwich lovers may also be enticed to try the restaurant’s Philly Cheeze “Steak,” “Chik’n” Sandwich, BLT and Impossible Burger. And yes, the ube pancakes come with a side of “bacon.”

Montenegro moved from the Philippines to the Bay Area in the late ’90s. She prides herself as being self-taught in the kitchen and began her culinary career as a personal chef and caterer in 2012.

She soon opened a restaurant that focused on her ideal of plant-based and cruelty-free cuisine, touting it as the as the “first Filipino vegan restaurant in the Peninsula.”

She had turned to vegan cuisine initially for health reasons. “But now I am all in for the environment and the animals as well,” she says.

The uniqueness of her offering made business to boom. So much so that two branches followed.

“Of course, I got a lot of heat from the older Filipinos, but when they tasted the food, they became believers! The most rewarding is when a non-vegan says, I’m not vegan but I absolutely love this food. That’s when I know I’ve done my job.”

She ran her business the past few years, always aware of her different roles as an immigrant and person of color, with no nearby family support.

The pandemic restrictions last year forced her to shutter all three of her former restaurants. Though as it turns out, you can’t put hardworking woman down for long.

With time and space to incubate in the chrysalis she had been growing around herself, Montenegro finally emerged from it with a stronger sense of self and thus, rechristened her culinary services into its now eponymous brand.

Montenegro’s taking more ownership and acceptance of her “identity and mission in bringing delicious and sustainable food and culinary activism to more families.” “I am so excited to share myself through the food without a mask or pretense.”

In a bit of good news for her loyal customers, the new restaurant takes over the spot of one of her former locations. It has a to-go window for online pick-ups and walk-up orders.

In addition to the regular dishes, Montenegro’s Chef Reina also offers prepacked bulk vegan “meat” dishes which the restaurant calls “Care Packages.” Aside from Pinoy comfort fare such as sisig and tocino, patrons can also purchase beef bulgogi and carnitas by the pound.

“It feels so good to be on my own and doing what I absolutely love without anything or anyone holding me back,” she says.

“I feel that finally my life is aligned where I can soar high and do what I am passionate about, which is ultimately to convince people to end suffering, not only to the environment or to the animals, but also themselves.”