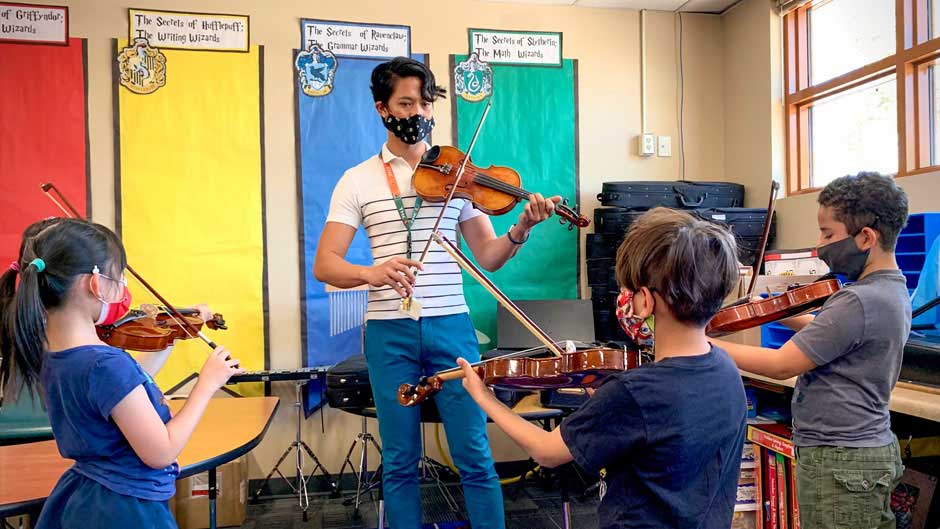 A Filipino graduate student at the University of Miami is drawing praise for his exemplary method of teaching young students.

The Shell award is given to only a few teachers nationwide who show excellence in teaching a STEM curriculum, while promoting an appreciation for other cultures.

Tulinao had worked as a music educator for seven years in the Philippines, where he also led a children’s orchestra.

At Amberlea Elementary, where he started working in 2017 in the West Valley of Phoenix, Arizona, he often uses a keyboard in the classroom to play tunes to signal the beginning or end of an activity.  Amberlea’s students are mostly Hispanic and Black and come from low-income households.

He volunteered for an after-school music program, and at the end of the year, the superintendent was amazed when the students played songs from popular movie soundtracks.

He was asked to craft a music-centered STEM Academy at the school, and Tulinao researched how to connect music to science, math, and engineering concepts.

His students explored the science behind music and covered topics like vibration, pitch, and the importance of measurement in crafting an instrument.

Tulinao also asked students to reconstruct  violins to help integrate engineering concepts. Then they learned to play the instruments during class.

“If they are able to put the instrument back together, then they are allowed to play it,” he said. “So, they are instantly motivated,” he told the University of Miami’s TheU.

Tulinao also teaches tolerance. In one unit, he taught his students about the history of a Filipino bamboo instrument called the Tongatong (inspired by Southeast Asia’s rice-pounding culture), which was used by the people of Kalinga, Philippines. Then, he requested that students work in groups to create a new prototype of the Tongatong using items found in Arizona.

Since many of his students come from a Hispanic heritage, Tulinao crafted a STEM lesson about the piñata. The students learned about the history of the party fixture and then about physics concepts like force and gravity that are involved when children hit the piñata.

When he asked the students to create their own piñata using recycled materials, their parents joined in too.

MOST READ
usa Flying Saucers: What We Know of UAPs and UFOs
usa Filipino’s mansion selling for $25M, the priciest in Orlando, Florida
usa 8 Reasons Why You Should Subscribe to a Meal Kit Delivery Service
usa Quo vadis, Philippines?
usa West Virginia man pleads guilty to sex with 14-year-old in PH
usa Stranger in Calgary park verbally abuses family chatting in Ilocano
usa Pentagon ‘committed’ to understanding UFO origins
DID YOU KNOW?
How to Dispute a Debt and Win | Simple Tactics
The 12 Best Lat Exercises for Muscle Growth
Countdown to summer: tips for learning how to surf
User Guide: How to Track a Lost iPhone
The Best Filipino Food to Try When Visiting the Philippines
Water Filter Pitcher: The secret to having clean water at home