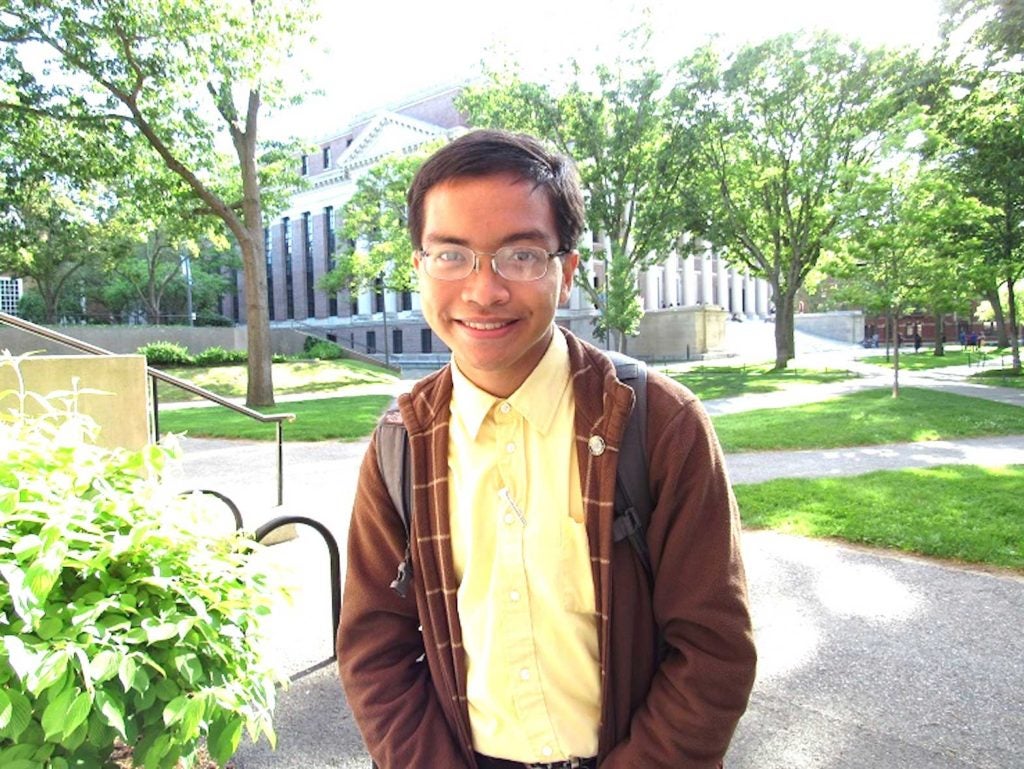 I am a Filipino immigrant. I was born and raised in the Philippines and I lived there for 11 years. My mother and I arrived here in America in 2011. My mother is a certified nursing assistant (CNA) doing the job of domestic caregiving, which is the arduous and literally back-breaking work that many Filipino immigrants do abroad. The Philippines is the biggest supplier of nurses worldwide.

The life of Overseas Filipino Workers (OFWs) like my mother is a life of survival as Filipinos work abroad to help relatives in the Philippines. The pandemic of anti-Asian racism is taking a toll on OFWs and Filipino diaspora communities in the West. It seems to me no one bothers to listen to our stories.

It is just like when the first person in the UK received the Pfizer vaccine back in December. Many Western media outlets proclaimed white British woman Margaret Keenan’s name, story, and photo, but nothing is known about the nurse who administered the vaccine. That nurse was a Filipina[. Her name is May Parsons. This is a metaphor for what being Asian, being Filipinx, is like here in the West. The West depends on the care of Filipinxs for the well-being of its people. Yet, they would not care about our stories and presence further exacerbated with the pandemic of anti-Asian racism.

Filipino music is a testament to these stories.

On May 19, from 1 p.m. to 12 a.m. Eastern Time, I played 11 hours of Filipino music  on Harvard Radio Broadcasting (WHRB) operated by Harvard students at 95.3 FM in Boston and online at whrb.org. I gave my program the title “Kumanta, Sumayaw, Makibaka! – Sing, Dance, Solidarity!” 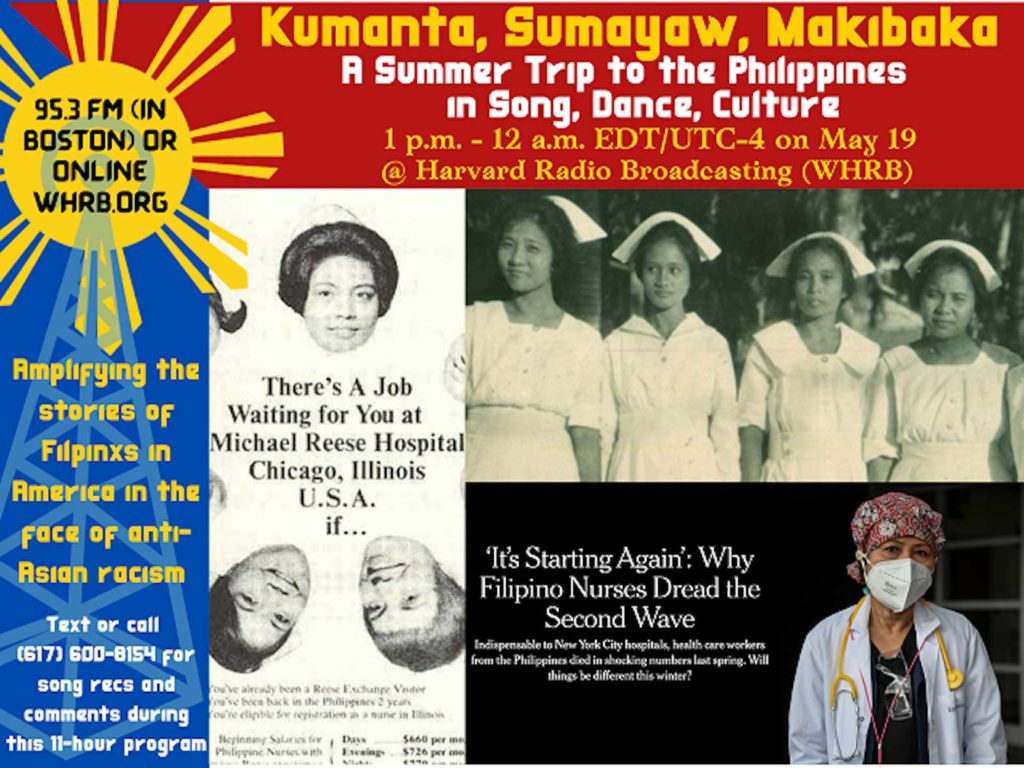 I played Kundiman love songs, a wide array of genres in Original Pilipino Music (OPM), and protest music where the songs included the voices of movements affirming Philippine cultural identities from the Philippines to the United States.  I also provided commentary and context.  I had a rough structure of how to use the 11 hours based on the variety of themes below.

–Vacation and summer scenes of the Philippines

–Daily life and scenes in the Philippines

–Stories of American colonization of the Philippines and how this history is so overlooked in American history education and discourse. I read out loud essays by Filipino historian and postcolonial thinker Renato Constantino such as “Filipinos in the Philippines” and “The Miseducation of the Filipino.”

–Stories of Filipinxs in America and how America has the pandemic of anti-Asian/AAPI racism. I read primary sources, such as the issues published on the week of January 23, 1930, on The Evening Pajaronian that is full of racist accounts against Filipinxs. I also read the Filipino response to this American white supremacy racism through the pamphlet “The Torch”]  where Filipino journalist in America David P. De Tagle asserts that Filipinxs have equal rights to the white man.

I played music in this theme that speaks to these stories of Filipinxs enduring and resisting American white supremacy and anti-Asian racism. My point in this theme is to let people know that all of the anti-Asian/AAPI racism and hate crimes that people are hearing about today is not new but is part of what America is with its systemic racism. I am assuming here that my listeners probably have never learned about the Watsonville Riots of the 1930s or the 200,000 Filipinxs who died between 1898 to 1902 in the Philippine American War.

–Stories of Filipinx resistance. I highlighted for instance the story of Larry Itliong and the Filipinxs who led the United Farm Workers movement. When people think of UFW, people oftentimes would only associate them with César Chávez, Dolores Huerta, Mexican, Latinx, and Chicanx peoples. But the bigger picture is that the United part of UFW is the unity of these communities with Filipinxs who were credited to be the first ones to go on strike. I read out loud parts of the primary source El Malcriado[, the newspaper of the UFW that tells these stories.

–OPM and the art of Filipino music

From the comments that I have heard and received, there is a general sense that this has been a new experience for people: listening to Filipino music. People were receptive and appreciative of this kind of music and the stories they have not heard of before.

Information about “Kumanta, Sumayaw, Makibaka” WHRB program can be accessed on the Harvard Radio page dedicated for it on whrb.org. @The Filam

Jeromel Dela Rosa Lara is a reporter for WHRB News, a DJ for WHRB’s Jazz Spectrum, and the curator of the Filipino Music Orgy©. He also taught a five-week experimental college course for the Harvard community in April called “Over 7,641 Reasons Why: America in the Philippines, Filipinxs in America .” Jeromel is a junior at Harvard College studying Social Anthropology and Comparative Study of Religion. He is a first-generation low-income (FGLI) student. An only child, he was raised by a single mother. He says: “My mother is the second oldest and the only woman in the family with five other brothers. I have so much respect for my mother who has accomplished and endured so much in her life.”