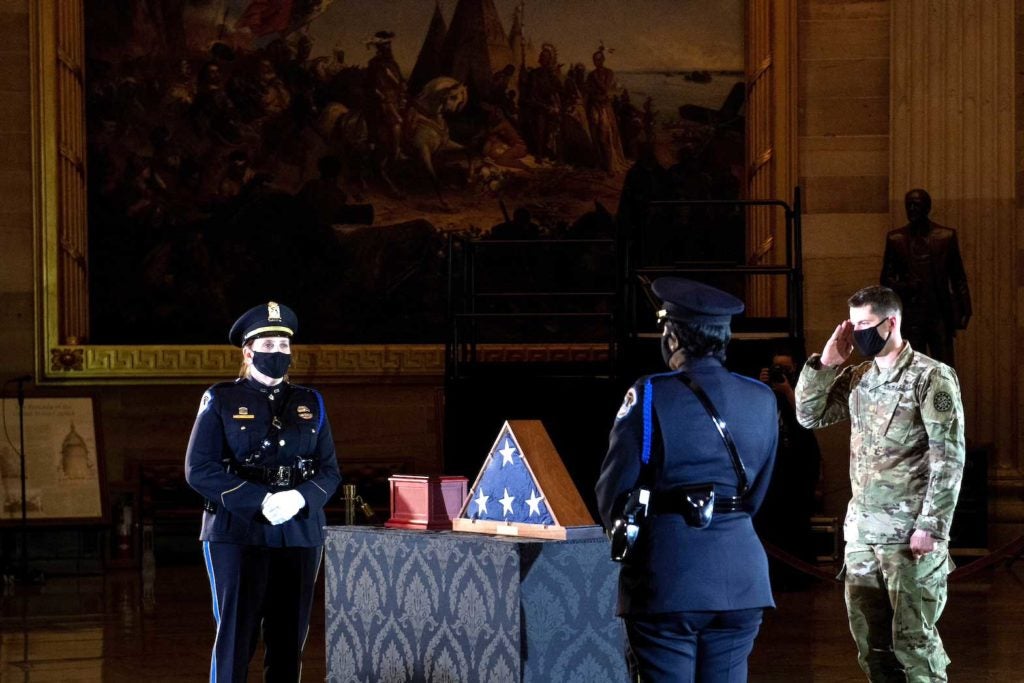 A member of the National Guard salutes while the remains of Capitol Police officer Brian Sicknick lay in honor in the Rotunda of the U.S. Capitol building in Washington, DC, U.S. February 2, 2021. Brendan Smialowski/Pool via REUTERS

WASHINGTON – Just hours before the U.S. House of Representatives was expected to vote to approve the formation of a commission to investigate the deadly Jan. 6 Capitol attack by Donald Trump’s supporters, the Senate’s top Republican set up a major roadblock by announcing his opposition to the proposal.

Speaking on the Senate floor, Minority Leader Mitch McConnell said, “I have made the decision to oppose the House Democrats’ slanted and unbalanced proposal for another commission to study the events of Jan. 6.”

Referring to existing congressional investigations and the previous arrests of hundreds of people in connection with the riot, McConnell slammed the door on further negotiations on establishing an independent commission to investigate the matter.

“There will continue to be no shortage of robust investigations,” McConnell said.

In the evenly split Senate, Republicans can block the legislation. At least 60 votes are needed to advance most bills in the 100-member Senate.

Senate Democratic Leader Chuck Schumer said he will schedule a debate on the legislation, calling an independent investigation necessary. At least two Republican senators – Lisa Murkowski and Mitt Romney – have signaled support, according to media reports.

Republican leaders in the House also oppose the Democratic-backed House bill. Democrats narrowly control the House and expect to pass the measure even if they do not draw much Republican support.

Multiple senior Republicans on Tuesday objected to the formation of a commission, whose proposed investigation could scrutinize Trump’s role in inspiring the attack with false claims that last year’s presidential election was stolen from him through widespread voting fraud.

The 10-member panel would be modeled after a bipartisan commission created to investigate the Sept. 11, 2001, attacks on the United States by al Qaeda militants. It would face a Dec. 31 deadline to produce a public report, including recommendations for preventing another attack on the Capitol.

Trump on Tuesday urged Republicans to vote against the proposal, calling it a “trap” inspired by “the radical left.” House Republican Leader Kevin McCarthy, who spoke with Trump by telephone Jan. 6 and announced his opposition to the commission on Tuesday, could also be a key witness for the commission.

The commission would be charged with looking at security and intelligence failures surrounding Jan. 6, when Trump’s supporters stormed the Capitol in a riot that left five people dead. The mob interrupted the formal congressional certification of Democrat Joe Biden’s victory over Trump in the November election.

Trump also faces a new criminal investigation of his family company, the Trump Organization, by the New York attorney general’s office. It is looking into whether the sprawling enterprise falsely reported property values to secure loans and win economic and tax benefits.

Congressional Republicans risk drawing Trump’s ire if they vote for the commission, which could call the former president as a witness to explain his actions including an incendiary speech to supporters shortly before the riot. Opposing the commission could alienate independent voters troubled by the violence.

Some lawmakers fear that a failure to create an independent commission could hurt chances that the U.S. public will learn the full story about the effort to overturn the results of the 2020 election.

Katko, a co-sponsor of the legislation, added, “This is about facts, it’s not about partisan politics.”

House Homeland Security Committee Chairman Bennie Thompson, a Democrat who crafted the bipartisan measure with Katko, on Wednesday told MSNBC he was optimistic the bill would be approved by the House and Senate.

McCarthy and McConnell have complained that the commission should do more than concentrate on Jan. 6 by investigating other “political violence.” Some Republicans want an investigation of the shooting of Republican congressman Steve Scalise during a practice at a baseball field in 2017 that left him gravely wounded and of protests in many U.S. cities last year against racism and police brutality.

MOST READ
usa MagSafe: Effortless and wireless charging for iPhones
usa Elon Musk Twitter Bid Restructured and Nearly Complete
usa University of Hawaii names nursing school after PH-born nurse
usa Monkeypox: Should the world be concerned?
usa Highway marker honoring Filipino sailors who settled in Virginia to be unveiled
usa A Time to Rise, Again!
usa Donato Dennis Agalli and Rafael Shamsiev Host Fundraising Reception for U.S. Senate Candidate for New York Joe Pinion
DID YOU KNOW?
The Best Kindle of 2022: Which one should you buy?
A Beginner’s Guide to Buying a Vacuum Cleaner in 2022
Island Hopping in Tulum: The 12 Best All-Inclusive Tulum Resorts
How to Dispute a Debt and Win | Simple Tactics
The 12 Best Lat Exercises for Muscle Growth
Countdown to summer: tips for learning how to surf