Bitcoin’s smaller rivals are eroding its share of the $2 trillion digital currency market. Of the dozens snapping at its heels, most have little use beyond financial trading – but few of the investors fueling their rise seem bothered.

Among the major “altcoins” – as all cryptocurrencies aside from bitcoin are known – some such as Ethereum aspire to be the backbone of a future financial system. Others, like Dogecoin, have no such ambitions, and are barely used in payments or business.

For the army of retail punters pouring money into them, their backstory – and the inherent volatility that exposes those who invest in them to potentially heavy losses – often matter little.

Instead, buyers see the chance of quick profit, or at least an entertaining ride.

OH, THIS IS FUN

Demi Staal, a 27-year-old electrical engineer based in The Hague, holds a portfolio of altcoins worth around $8,000.

Among his previous plays: a 30 euro ($36) bet on Shiba Inu, a Dogecoin spin-off that briefly became one of the 20 biggest cryptocurrencies this month.

“I think it’s a joke coin, just like Dogecoin,” said Staal, who doubled his money on that transaction. “I saw it listed at my exchange a few days ago and was like ‘oh, this is fun, I’ll buy this’.” 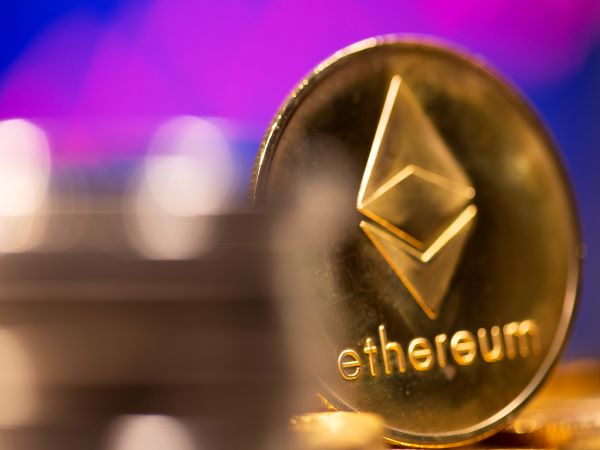 A representation of virtual currency Ethereum is seen in front of a stock graph in this illustration taken February 19, 2021. REUTERS/Dado Ruvic/Illustration/File Photo

Along with prospects of fun and gains, however, altcoins are plagued by volatility.

Such swings in price can leave investors heavily out of pocket and, unlike bitcoin and depending on the regulatory framework of the exchange on which they are bought, many can only be swapped on exchanges for other digital coins rather than cashed in for hard currency.

As investors pile into rivals, Bitcoin’s share of the crypto market has slumped to around 45% from 70% this year, according to U.S. researcher Coin Metrics, while its trading volume share at major exchange Binance has halved to 23%, data provider Crypto Compare says.

Its market cap remains around $800 billion and, while all cryptocurrencies continue to operate outside the mainstream global financial system’s regulatory framework, it is more widely accepted for payments than its peers.

Second-largest coin Ethereum is catching up, having risen more than four-fold this year to around $380 billion as more peer-to-peer “decentralized finance” crypto lending platforms have started to use its blockchain.

Ethereum’s surge has triggered wider interest in the altcoin universe from retail investors with cash to burn, part of a trend that has also fueled the use of trading apps like Robinhood and powered a social-media driven rally in stocks including GameStop Corp.

“The fact (the crypto market) is 24/7 makes it more accessible for people who are working,” said Amar Rai, a 25-year-old risk consultant whose crypto investments have doubled since March last year.

WHO LET THE DOGE OUT?

Half a dozen other altcoin investors, all men in their 20s, told Reuters they based their decisions on information gleaned from sites like Reddit, Twitter and TikTok.

As coins such as Ethereum – whose backers say it will transform finance – grow, that use of social media trends as a reference point has meant others with few such prospects have also ballooned. 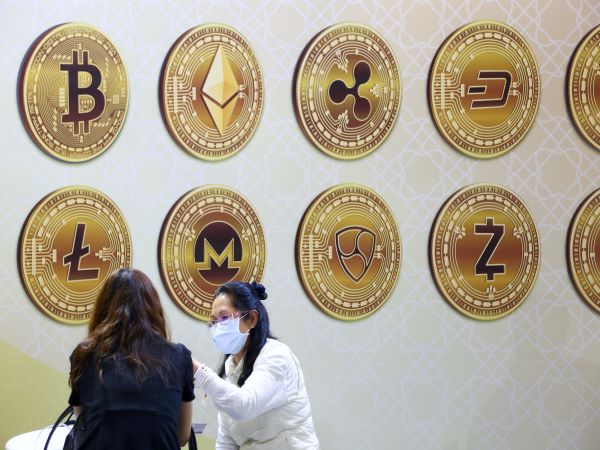 Customers talk against a backboard with signs of cryptocurrency during 2020 Taipei International Finance Expo in Taipei, Taiwan, November 27, 2020. REUTERS/Ann Wang

Take Dogecoin: Started as a joke in 2013, its logo features a Shiba Inu dog widely used in memes. But that has not dented its ascent.

It has soared over 10,000% this year to becomes the fifth-biggest token with a market cap of over $60 billion, but that rise has not coincided with any growth in mainstream usage for payments, and with an unlimited supply it lacks the scarcity that has attracted inflation-warier investors to bitcoin.

Instead it has gained momentum from the tweets of a prominent backer: Tesla boss Elon Musk.

Dogecoin last week jumped about 25% after Musk said he was working with its developers to boost its efficiency. It had previous slumped by a third after Musk called it a “hustle.”

Staal, the investor in The Hague, said he recently lost out after buying Dogecoin.

“I bought some a couple of weeks ago, just for fun,” he said. “I just put a couple of hundred euros in there. It didn’t pan out for me though – I bought it at the wrong time.”

Best Cryptocurrency to Invest in

What is the Next Bitcoin?

Further down the food chain sits Shiba Inu, which soared over 2,000% in the four days to May 11.

The Dogecoin spinoff’s individual coins are worth fraction of a cent and have barely any practical use, while its website calls it “an experiment in decentralized spontaneous community building.”

“I’m interested in money,” he said, having started buying Shiba Inu about four weeks ago. “The tech behind it is interesting, but the money is what gets me.”

The spinoff is still valued at around $6 billion, according to Crypto Market Cap, though it has sunk 60% over the past week.