NBA roundup with Warriors top Grizzlies for No. 8 seed I NBA Roundup

NBA roundup with Warriors top Grizzlies for No. 8 seed

Stephen Curry scored a game-high 46 points en route to his second NBA scoring title and Jordan Poole stalled a rally with a late 3-pointer Sunday afternoon as the Golden State Warriors held off the visiting Memphis Grizzlies in San Francisco for a 113-101 win to claim the No. 8 position in this week’s play-in tournament.

With Curry scoring 17 of his 46 points, the Warriors appeared to take command of the game in the third quarter, but Dillon Brooks led a Memphis comeback. Before fouling out, Brooks contributed 13 points to a 22-5 flurry that made it 91 all with 6:32 still to play. 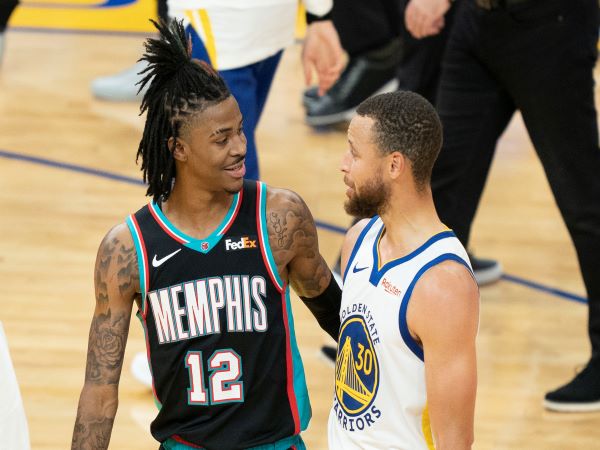 The Grizzlies went up by two twice after that, before Poole nailed his momentum-changing 3-pointer.

The loss ended Memphis’ five-game winning streak and landed the Grizzlies in the No. 9 spot in the play-in, where they will host 10th-seeded San Antonio on Wednesday.

LeBron James scored 25 points as Los Angeles won in New Orleans on the final day of the regular season, but was unable to avoid the play-in round.

James left the game midway through the fourth quarter, slightly favoring the injured right ankle that sidelined him 26 games down the stretch. 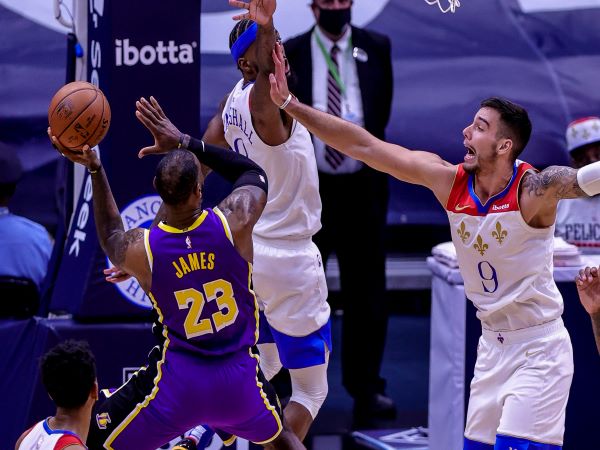 But the victory wasn’t enough for the defending NBA champions to avoid the Western Conference play-in tournament. Portland defeated Denver to claim the sixth seed so the seventh-seeded Lakers will host eighth-seeded Golden State in a play-in game Wednesday.

Rudy Gobert added 13 points and 16 rebounds. Mike Conley chipped in 11 points, nine assists and six rebounds. Utah clinched the No. 1 seed in the Western Conference and will have home-court advantage throughout the playoffs. 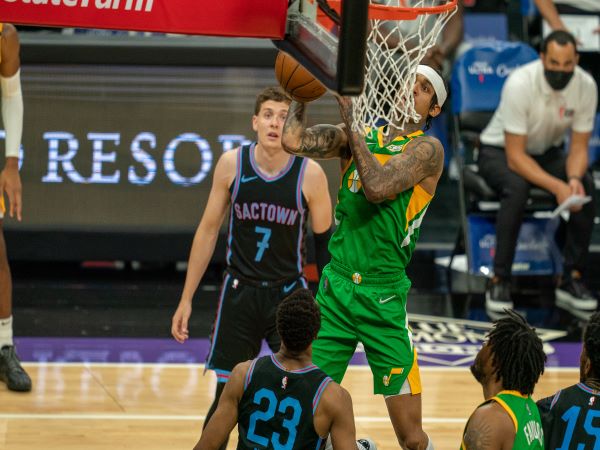 Anthony Edwards closed his push for NBA Rookie of the Year with 30 points, and Minnesota dominated Dallas nearly wire-to-wire for a season-ending win in Minneapolis.

Edwards capped his debut season with his eighth game of 22 or more points over the final nine. He is in contention to be Minnesota’s first Rookie of the Year since teammate Karl-Anthony Towns, who won the award in 2016.

Dallas, which locked up the No. 5 seed and will play the Los Angeles Clippers in the first round of the playoffs, shot 16-of-38 from 3-point range, including Kristaps Porzingis making 4 of 5. Porzingis finished with 18 points.

Precious Achiuwa had 23 points and 10 rebounds to lead Miami to a road win over Detroit in the regular-season finale.

With little to no incentive to win the game, each team rested several starters. Miami already had the No. 6 seed in the Eastern Conference playoffs clinched going into the game, while Detroit was looking to clinch the league’s second-worst record and enhance its odds of winning the first pick in the NBA draft lottery.

Tyrese Maxey had 30 points, seven rebounds and six assists to lift host Philadelphia over Orlando in game in which the 76ers rested all of their starters.

Since the Sixers have had already secured the top seed in the Eastern Conference playoff race, Joel Embiid, Ben Simmons, Danny Green, Seth Curry and Tobias Harris sat the game out.

Kevin Durant totaled 23 points, a season-high-tying 13 assists and eight rebounds in three quarters as Brooklyn Nets secured the second seed in the Eastern Conference with a wire-to-wire win over Cleveland in New York.

The Nets ended the season on a five-game winning streak and edged out the Milwaukee Bucks for the second seed. A loss by Brooklyn and a Milwaukee win over the Chicago Bulls would have pushed the Nets into the third seed due to losing the head-to-head tiebreaker with the Bucks.

RJ Barrett scored a game-high 22 points as New York completed a resurgent regular season and clinched the fourth seed in the Eastern Conference by hanging on for a win over visiting Boston.

The Knicks, who are headed for the playoffs for the first time since 2013, will open the quarterfinals at home next weekend against the fifth-seeded Atlanta Hawks.

The Celtics already were locked into the seventh spot in the Eastern Conference and the first seed in the play-in tournament. Boston, which needs to win just once to advance to the playoffs, will play the eighth-seeded Washington Wizards on Tuesday.

Canadian-born Oshae Brissett exploded for a career-high 31 points against his country’s displaced team, and Indiana earned a home game in the NBA’s play-in tournament with a thrashing of host Toronto.

Brissett completed a double-double with 10 rebounds, while Domantas Sabonis had one of his own with 25 points and 16 rebounds, as the Pacers snapped a two-game losing streak to clinch a tie for eighth place in the Eastern Conference.

Indiana assured it would finish tied with either Charlotte or Washington, who were playing each other in a contest that finished after the Pacers-Raptors game had ended. The Wizards secured the win 115-110 over the Hornets.

Bradley Beal made a go-ahead layup with 2:53 remaining as host Washington beat Charlotte to secure the eighth seed in the Eastern Conference.

Russell Westbrook collected 23 points, 15 rebounds and 10 assists and Beal added 25 points in his first contest after a three-game absence for the Wizards.

Robin Lopez posted 18 points and Rui Hachimura had 16 for Washington, which will visit the seventh-seeded Boston Celtics in the play-in round on Tuesday. Charlotte, which owns the No. 10 seed, will face the Indiana Pacers on Tuesday in Indianapolis.

E’Twaun Moore poured in 22 points, including the deciding 3-pointer with 2.2 seconds to play, to lift visiting Phoenix past San Antonio.

Phoenix was without Devin Booker (rest), Chris Paul (rest) and Deandre Ayton (knee) as the Suns opted to keep key players on the bench despite the chance to earn the top spot in the Western Conference.

San Antonio pulled its starters at the end of the third quarter, allowing the two teams’ bench players to decide the contest. The Suns’ reserves had just enough to secure the win that forced Utah to win in Sacramento later Sunday in order to finish atop of Phoenix in the West.

Led by rookie Onyeka Okongwu’s career bests of 21 points and 15 rebounds, Atlanta tuned up for its first trip to the playoffs since 2017 with a win over visiting Houston in the regular-season finale on Sunday.