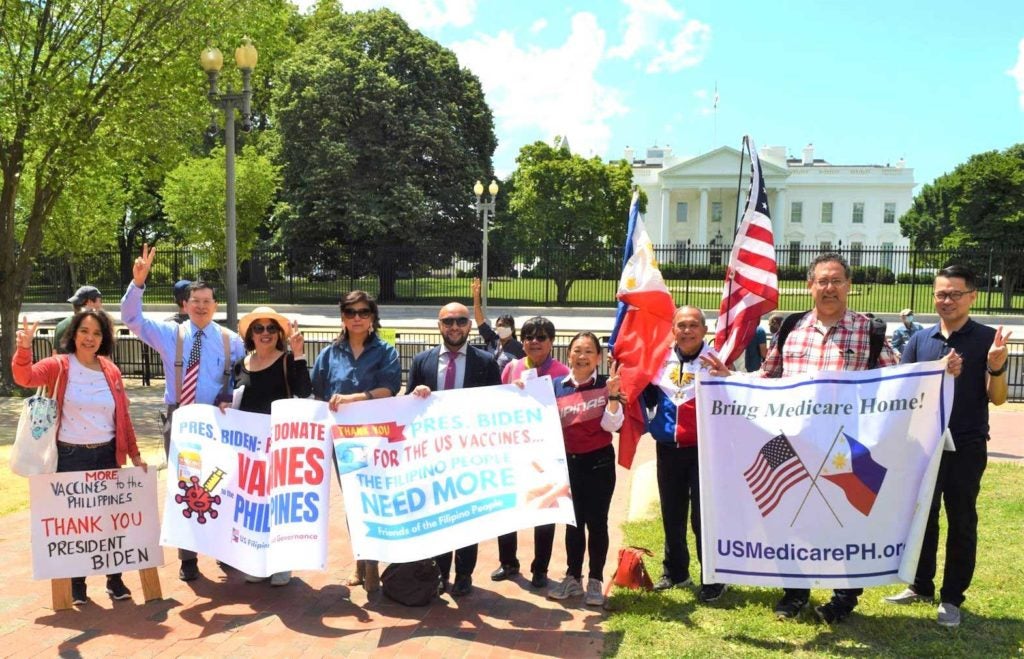 Eric Lachica and Bettina Obias (2nd and 3rd from left) of U.S. Filipinos for Good Governance (USFGG) said the Filipino people are in dire need of the vaccines. MANILA MAIL

WASHINGTON, DC —  Filipino American leaders on May 15 thanked President Biden and the American people for sending an initial donation of 2.5 million doses of AstraZeneca vaccines through the COVAX facility to the Philippines.

The leaders, representing various national organizations, also appealed to Biden to release by Memorial Day an additional 5 million doses from the excess AstraZeneca stockpile in Baltimore and Ohio. Biden recently pledged to donate 60 million doses not being used in America to help desperate nations. 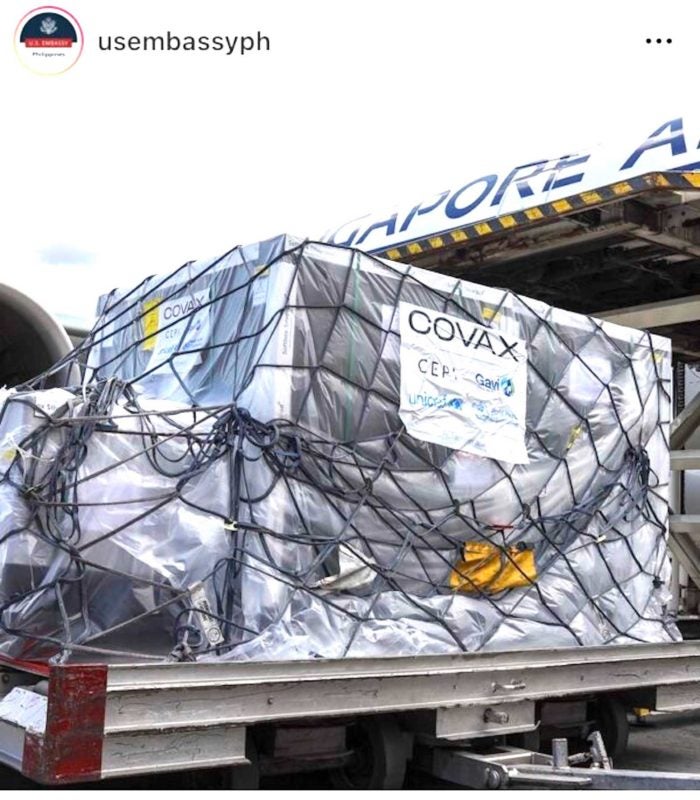 The U.S. Embassy in Manila posted this picture to showcase the help provided by the US.

Philippine Ambassador Jose Manuel Romualdez on May 7, had disclosed that “through the intercession of the White House, two million doses of AstraZeneca and 1.3 million doses of the Pfizer vaccines will be delivered to the Philippines beginning mid-May through the COVAX facility, as confirmed by Secretary Galvez. Moderna will begin delivery on June 21.”

According to Eric Lachica of U.S. Medicare Philippines and organizer of the thank-you rally in front of the White House, the community leaders are planning another White House rally in June with other community organizations to thank the Biden Administration after the next tranche of millions of donated vaccines arrive.

“During the next weeks, our supporters in several states will virtually meet with the staff of U.S. Senators and Biden administration officials to advocate for the early delivery of donated AZ vaccines,” said Lachica. “The Filipino People can expect another separate 42 million doses from the American funded COVAX facility.”

Lachica and several speakers urged supporters to appeal to President Biden on his website: www.whitehouse.gov/contact/ and to their U.S. Senators on www.senate.gov/senators/senators-contact.htm to donate early the five million excess doses of AstraZeneca vaccines.

All of the speakers stressed that the Filipino People are facing the terrible pandemic, noting that more than 100 Filipinos are dying per day due to COVID-19.

The leaders who attended the rally include Virginia Alinsao RN of the Philippine Nurses of America (PNA) International Affairs committee with Alvin Matium RN, Atty. Steven Raga, a Filipino American candidate for the NY City Council, Paul Inserto RN, Bettina Obias of the US Filipinos for Good Governance (USFGG) with Tina Maynigo and Ronie Nieva, Mel Alonzo of the Alliance of Women for Advancement and Reform (AWARE PH),  David Borden of the Stop the Drug War, and Dr. Bambi Lorica MD pediatrician with Dr. Victor Lorica.