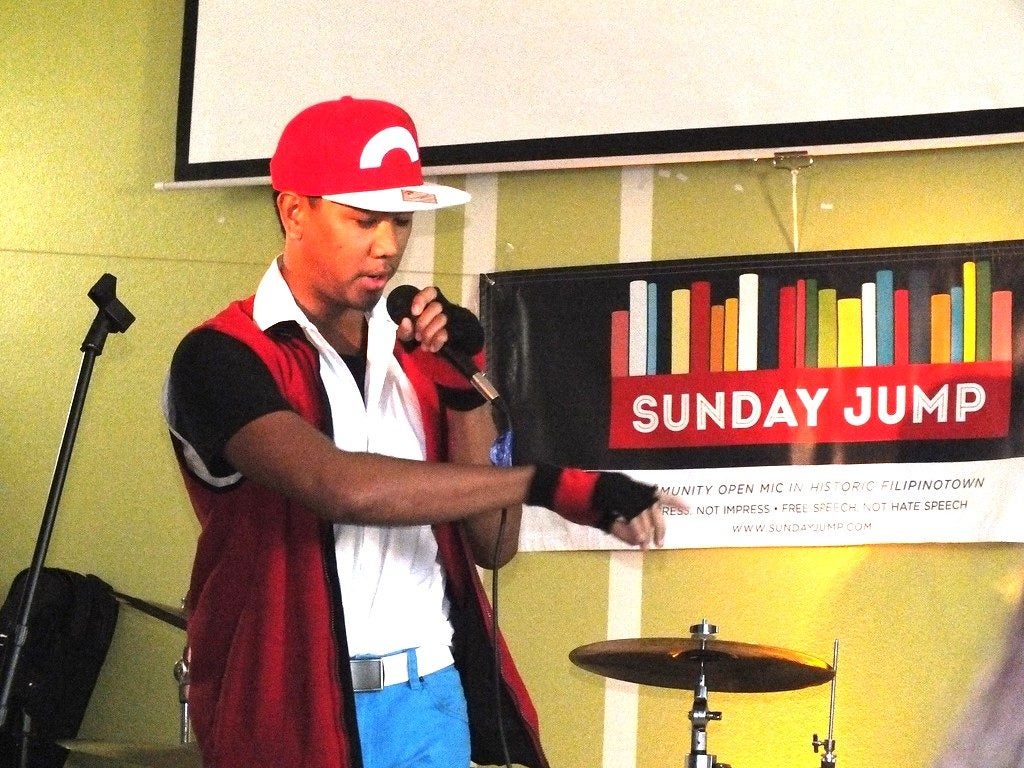 Rapper-poet Christian Perfas explains that his costume is not as Ash from the Pokemon anime fame. INQUIRER/Florante Ibanez

Sunday Jump is a community open mic series in Historic Filipinotown founded by Eddy M. Gana, Jr., Stephanie Sajor and Janice Sapigao. This regularly scheduled 1st Sunday of the month event provides performers and spoken word artists a venue to appear in front of a small but appreciative live audience.

Made up mostly of millennials, the spectators snapped their fingers and clapped their hands to show their approval of the performance material which tended to be provocative, political and funny. 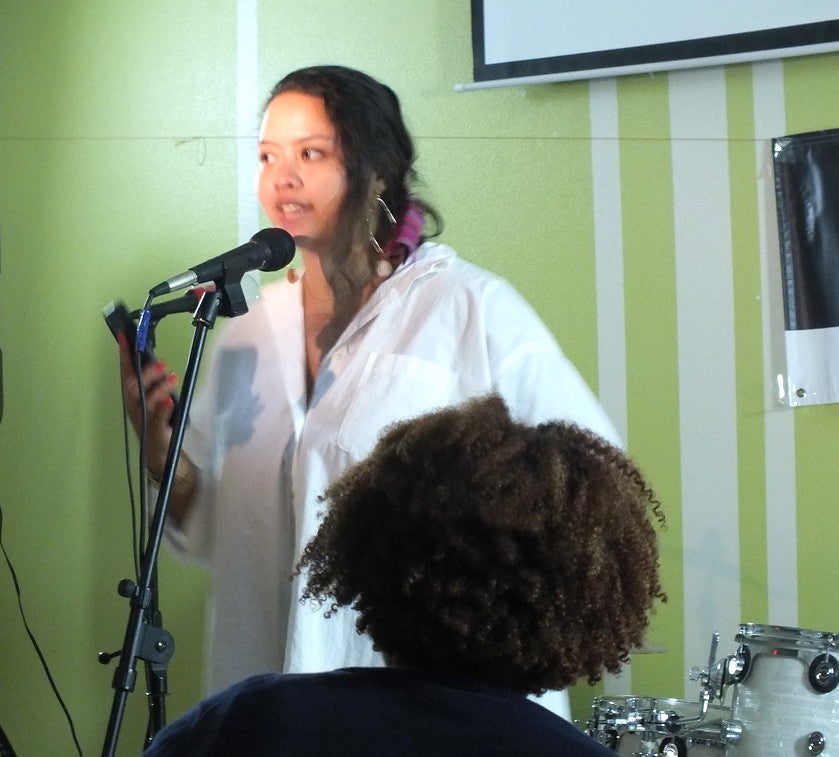 “We have two community guidelines: (1) express, not impress and (2) free speech, not hate speech. It’s not about the snaps and claps. It’s about sharing the love of your art. It’s not about putting people down. It’s about uplifting our communities,” explained Sajor.

Although the monthly event over five years has moved through a few different venues in Hi-Fi, it is still a welcome oasis to enjoy art and fellowship wherever it’s located. This particular October 1 Jump, and future Sunday Jumps will be held at the Pilipino Workers Center/Larry Itliong Village (PWC), a mixed use low cost housing and social services unit, in Los Angeles’s designated Historic Filipinotown. 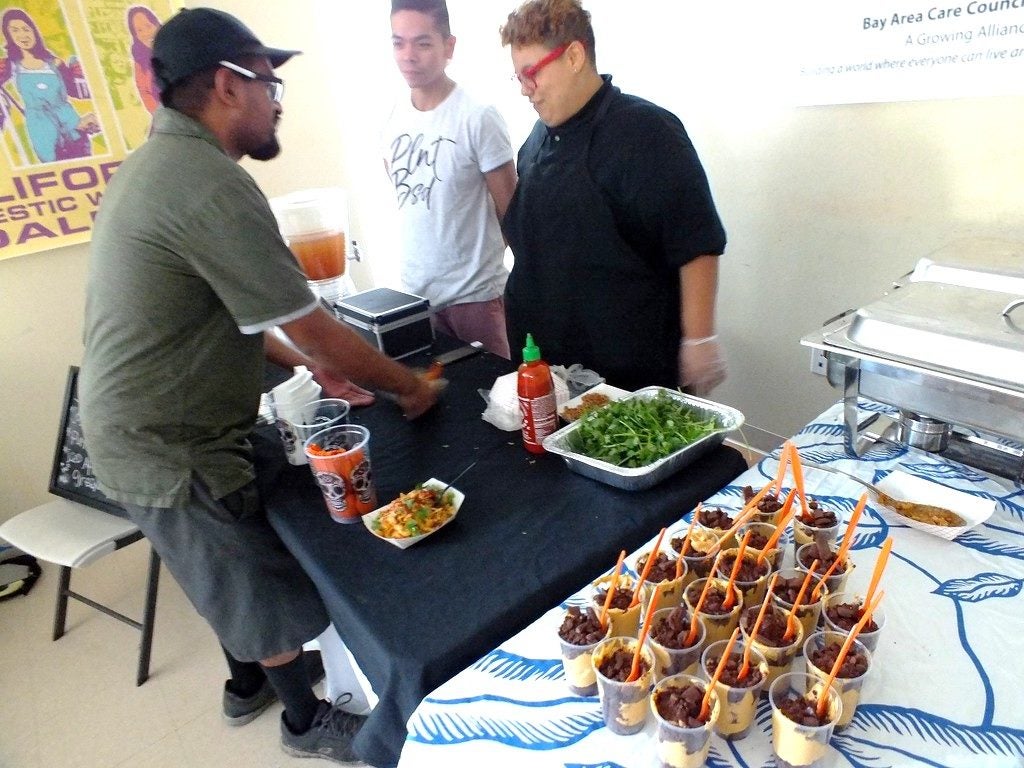 “As a safe space for marginalized voices, we turn fear into resilience during these scary times. This month with Halloween and Pilipinx American Hxstory Month in the air, we highlight Filipino folklore, from the aswang to colonial ghosts of the past and today’s tensions across the nation. COSTUMES ARE HIGHLY ENCOURAGED! With this frightening lineup, you will not want to miss it.” 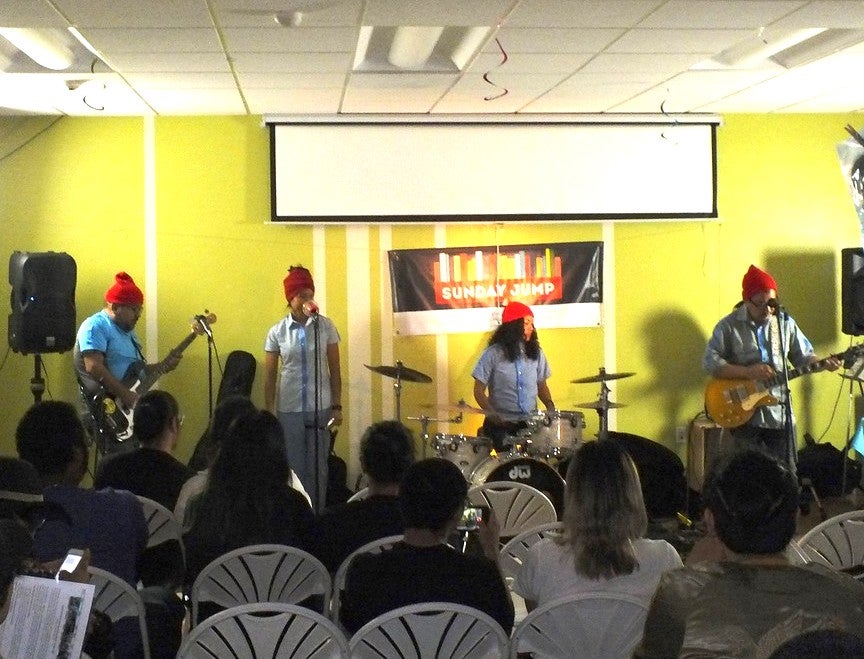 Band Moto rocks out and closes the evening. INQUIRER/Florante Ibanez

The mic made room for announcements of community events including the upcoming 26th Festival of Philippine Arts & Culture (FPAC) on October 14 at Echo Park and journalist Raissa Robles’ evening speaking event October 14 also at PWC. More Sunday Jump information can be found on Facebook.