U.S. retail sales unexpectedly stalled in April as the boost from stimulus checks faded, but an acceleration is likely in the coming months amid record savings and a reopening economy.

The Commerce Department said on Friday the unchanged reading in retail sales last month followed a 10.7% surge in March, an upward revision from the previously reported 9.7% increase.

Economists polled by Reuters had forecast retail sales would rise 1.0%.

Retail sales account for the goods component of consumer spending, with services such as healthcare, education, travel and hotel accommodation making up the other portion. Households have accumulated at least $2.3 trillion in excess savings during the pandemic, which should underpin spending this year. 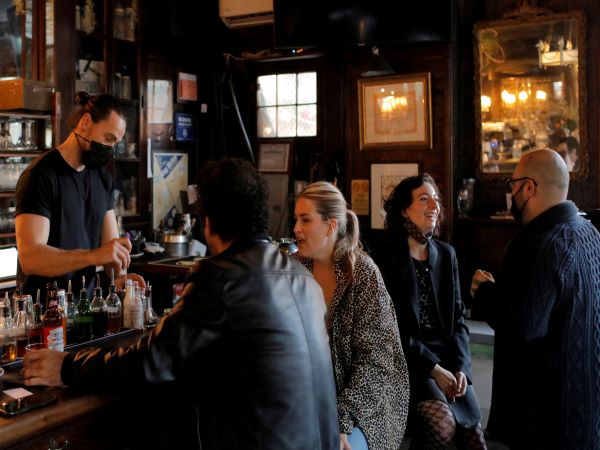 People gather at the White Horse Tavern (est. 1880) as restrictions eased on indoor drinking in bars, allowing seating at the bar, during the outbreak of the coronavirus disease (COVID-19) in Manhattan, New York City, New York, U.S., May 3, 2021. REUTERS/Andrew Kelly/File Photo

Coming on the heels of news this month that hiring slowed in April amid a shortage of workers, the weak sales could cause anxiety about the economic recovery. Though more than a third of Americans have been fully vaccinated against COVID-19, fears about the virus linger and schools have not fully reopened for in-person learning, keeping many workers at home.

Excluding automobiles, gasoline, building materials and food services, retail sales dropped 1.5% last month after an upwardly revised 7.6% increase in March. These so-called core retail sales correspond most closely with the consumer spending component of gross domestic product. They were previously estimated to have shot up 6.9% in March.

Consumer spending, which accounts for more than two-thirds of U.S. economic activity, expanded at a 10.7% annualized rate in the first quarter, adding 7.02 percentage points to the economy’s 6.4% annualized growth pace.

Much of the surge in consumer spending last quarter occurred in March, which set a higher growth base for consumption heading into the second quarter.

LATEST
Spotlight on Xbox Game Pass as Microsoft showcases upcoming games
Apple tightens rules after Justice Department targeted US lawmakers
US senator slams Apple, Amazon, Nike, for enabling forced labor in China
Maui Filipino Chamber of Commerce honors top leaders, scholars
GameStop lures Amazon talent with grand plans and no frills
US inflation will accelerate if economic recovery stays on track
MOST READ
usa Filipino worker’s death now under investigation in Alberta
usa What does the NBA title mean to Utah Jazz and Filipinos?
usa AstraZeneca shows good risk-benefits for those over 60s
usa Is it time to buy Air Canada stock?
usa How to record your screen – for phone and desktop
usa Natural weight loss tips and tricks to try
usa PH flag raised in SF and other cities for June 12