Can young lawyer be Fil-Canadians’ next Member of Parliament?

Can young lawyer be Fil-Canadians’ next Member of Parliament? 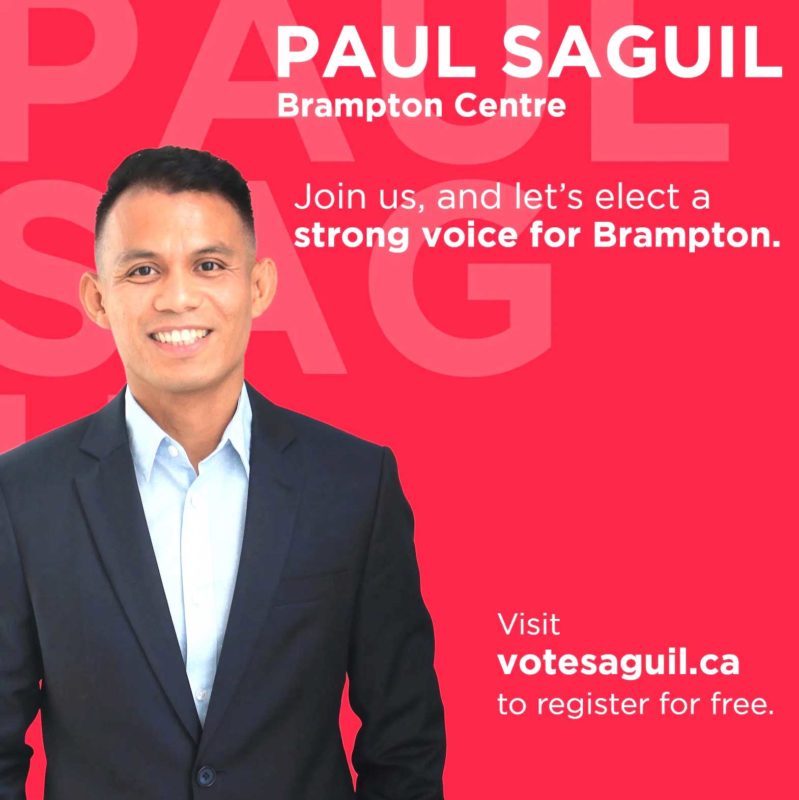 Paul Jonathan Saguil is seeking the Liberal nomination for the riding of Brampton Centre in Ontario. HANDOUT

Twenty four years after the first Filipino Canadian was elected to Parliament in 1997, a Toronto lawyer is trying to break the spell and become the second to get elected.

Paul Jonathan Saguil is seeking the Liberal nomination for the riding of Brampton Centre in Ontario, hoping to follow Dr. Rey Pagtakhan of Winnipeg, the first Filipino elected to Parliament. Pagtakhan, a Liberal, served for four terms from 1997 to 2004. The federal election is not called yet, but is expected to happen before the end of the year.

Saguil is as part of the Global Anti-Money Laundering Department, where he leads sanctions and anti-corruption efforts targeting child pornographers, human traffickers and war criminals.

Born in Manila, Saguil immigrated to Canada at the age of nine with his parents in 1991, settling in Brampton, Ontario.

In a wide-ranging interview via Zoom from his home in Toronto, Saguil shared his journey as a young immigrant and his experiences facing challenges in his professional and volunteer work.

An award-winning lawyer with a long record of civic engagement and championing inclusion, Saguil has appeared before the Supreme Court of Canada, the Federal Court, and all levels of court in Ontario.

He taught internationally trained lawyers at the University of Toronto’s Faculty of Law and has served on several not-for-profit boards including as chair of the Law Society of Ontario Equity Advisory Group and the Ontario Bar Association’s Equality Committee. In 2019 he was appointed to the Judicial Advisory Committee for the Greater Toronto Area (GTA).

“My parents and I came from the Philippines with very little. But they taught me that in Canada there are no limits on what someone can achieve.

“I took out student loans to pay for law school. I’ve used my legal training to fight discrimination against minorities, Indigenous people, and the queer community, and to stop criminal organizations and human traffickers from using the financial system to hurt innocent people.

During the interview with this journalist, he never talked about his personal sacrifices in pursuing his causes; but in a 2017 interview with Toronto’s Precedent magazine for lawyers, he revealed the personal toll on his life that ended a personal relationship.

He never asked to be a poster child for diversity, according to the magazine. But in 2008, as a first-year associate at Stockwoods LLP., he decided to be open about the fact that he’s gay.

“I have always been fighting against discrimination in all forms, and making sure that people have the same opportunities whether you are of a different racial background or sexual orientation. “

“One type of discrimination affects everyone and they use the same language.”

He related how he encountered discrimination in the legal profession where he was often asked whether he was the client or the lawyer. Does he still encounter the same type of discrimination now?

While the initiatives he has pursued are bearing fruit, Saguil fears that they have started to outlive their usefulness; he often sees the exact same people showing up at diversity events. “Sometimes it’s frustrating.  I look around the room and think, Are we just in an echo chamber?”, he told Precedent.

The increase in the number of racialized lawyers has forced the profession to take their concerns seriously: “We can’t be silenced anymore,” he asserted.

He believes racism is not new, but the fact that more people are talking about it is new.

“When our family came to Canada, the immigration officer at the airport asked my mom about her occupation – you are a housekeeper? No, I am an accountant, his mother retorted.” The incident remains embedded in his mind.

Like many others mother had to go through the discrimination of not having her professional status recognized, so she had to struggle to study again.

Discrimination or racism doesn’t have to be physical violence alone but manifests itself  in other forms as well.

“If a worker does not get paid sick leave, that is discrimination, and we know that many of our kababayans are front-line workers. It is systemic violence if it is keeping them from living like any other Canadian lives.”

What can he do if he wins?

“As a parliamentarian, I will bring my personal experiences and background to the table, and while other people also suffer discrimination, our own Filipino experience is unique  to us.”

He says he will try to give “voice” to our kababayans as is expected of him as a Filipino parliamentarian.

His presence in Parliament he hopes, will be seen as an example, an inspiration for others.