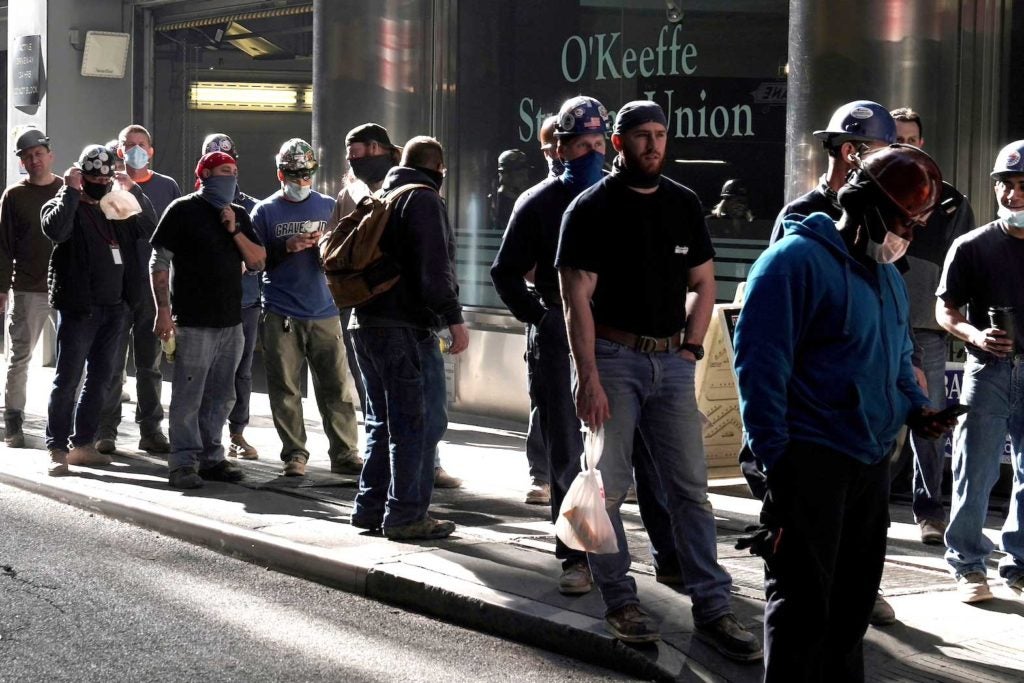 Construction workers wait in line to do a temperature test to return to the job site after lunch, amid the coronavirus disease (COVID-19) outbreak, in the Manhattan borough of New York City, New York, U.S., November 10, 2020. REUTERS/Carlo Allegri/File Photo

WASHINGTON – U.S. job openings surged to a record high in March while hiring lagged, further evidence that a shortage of workers was hampering job growth.

The Labor Department’s monthly Job Openings and Labor Turnover Survey, or JOLTS report, on Tuesday also showed layoffs dropping to record lows in March. The report could put pressure on the White House to review the government-funded unemployment benefits program, including a $300 weekly supplement, which pays more than most minimum-wage jobs.

Job openings, a measure of labor demand, jumped 597,000 to 8.1 million on the last day of March, the highest since the series began in December 2000. The surge was led by the accommodation and food services sector, with 185,000 vacancies opening up in March. There were an additional 155,000 job openings in state and local government education.

In the arts, entertainment and recreation industries, vacancies increased by 81,000 jobs. Unfilled jobs also increased in manufacturing, trade, transportation and utilities industries as well as in finance. Job openings increased in the Northeast and Midwest regions. But vacancies dropped in the healthcare and social assistance industry.

Companies are scrambling for labor to meet pent-up demand that has been unleashed by the massive fiscal stimulus and rapidly improving public health. In addition to the generous unemployment benefits, the worker shortage has also been blamed on parents still at home caring for children and coronavirus-related retirements.

The government reported last Friday that nonfarm payrolls increased by only 266,000 jobs in April after rising 770,000 in March. That left employment 8.2 million jobs below its peak in February 2020.

The JOLTS report showed hiring increased to 6 million in March from 5.8 million in the prior month. State and local government education hiring rose. There were also gains in educational services as well as mining and logging. The hiring rate climbed to 4.2% from 4.0% in February.

Layoffs dropped to a record low 1.5 million from 1.7 million in the prior month. That pushed the layoffs rate down to 1.0% from 1.2% in February.