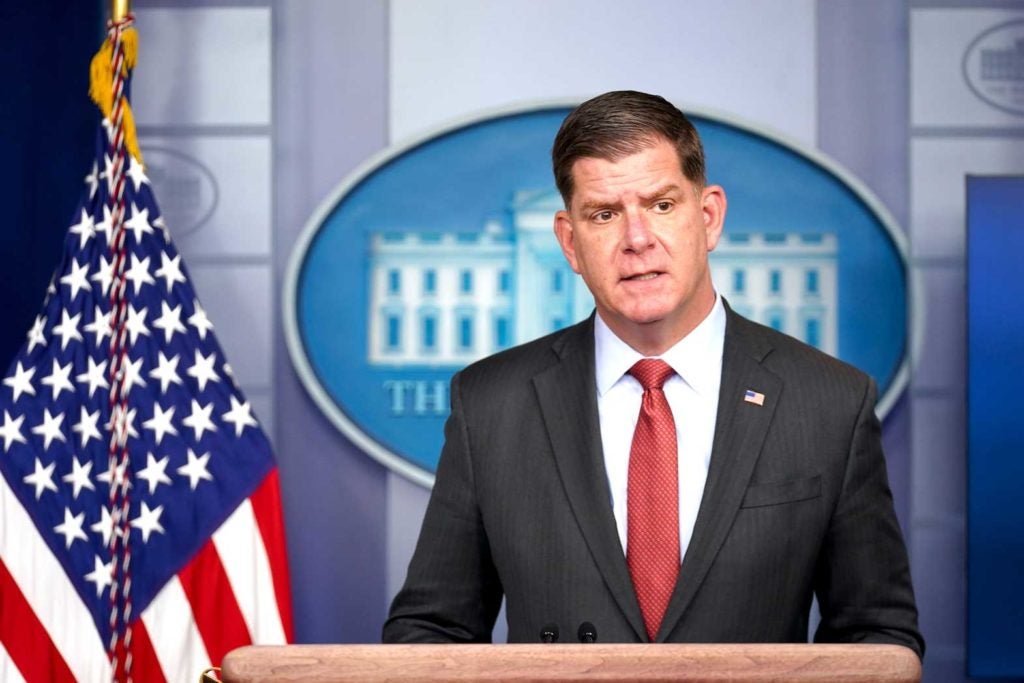 Secretary of Labor Marty Walsh speaks during a news conference at the White House in Washington, U.S. April 2, 2021. REUTERS/Erin Scott

WASHINGTON – The Biden administration on Wednesday blocked a Trump-era rule that would have made it easier to classify gig workers who work for companies like Uber and Lyft as independent contractors instead of employees, signaling a potential policy shift toward greater worker protections.

“By withdrawing the independent contractor rule, we will help preserve essential worker rights and stop the erosion of worker protections that would have occurred had the rule gone into effect,” Labor Secretary Marty Walsh said in a statement.

“Too often, workers lose important wage and related protections when employers misclassify them as independent contractors,” he said.

Walsh told Reuters in an interview last week that a lot of U.S. gig workers should be classified as “employees” who deserve work benefits. His comments hurt stocks of companies that employ gig labor.

Walsh said in the interview that his department would have conversations in coming months with companies that employ gig labor to make sure workers have access to consistent wages, sick time, healthcare and “all of the things that an average employee in America can access.”

An Uber spokesman acknowledged on Wednesday the current employment system is outdated.

“It forces a binary choice upon workers: to either be an employee with more benefits but less flexibility, or an independent contractor with more flexibility but limited protections.”

He said the company believes it can offer the best of both worlds.

A DoorDash spokeswoman said “dashers work fewer than four hours per week on average and they overwhelmingly tell us how important the flexibility to earn on their own schedule is to them.”

Gig workers are independent contractors who perform on-demand services, including as drivers, delivering groceries or providing childcare – and are one-third more likely to be Black or Latino, according to an Edison Research poll.

The rule by former President Donald Trump’s administration, finalized in early January before he left office on Jan. 20, would have hampered workers’ ability to earn a minimum wage and overtime compensation – protections offered under the Fair Labor Standards Act (FLSA).

It was supposed to take effect in March, but did not because it was being reviewed by the Labor Department under President Joe Biden, a Democrat who succeeded the Republican Trump. The withdrawal will be effective on Thursday.

“The independent contractor rule was in tension with the FLSA’s text and purpose,” the Labor Department said.