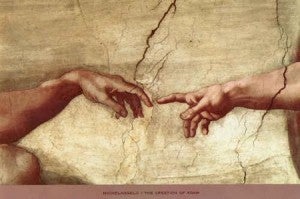 Detail from the Sistine Chapel frescoes.

The “culture of life” is not just a modern phrase. Christians describe it as a way of life based upon the theological truth that human life at all stages from the cradle to the grave, from the moment conception till natural death, is sacred.

It is the polar opposite of a “presidential notion of eliminating the undesirable and suspected” people through death penalty and extrajudicial killings (EJKs).

The Christian nation in the Far East has become too traumatized to react while being violated, or flabbergasted to see and feel its terror. “How can we celebrate Christmas, a season of joy and life,” citizens ask, “when many of us fear” that the culture of death has tightened its grip through the EJKs we experience every day (SWS survey).

The bedrock is the Bible. The basis of the promotion of the “culture of life” is the Word Of God that never fails to tell us about the divine origin, transcendental nature and sacredness in the human person.

As reiterated by Vatican Council II (Gaudium Spes, 12), “man was created in the image of God” (Genesis 1:26). Genesis has decided to award a special dignity to man by representing him as wonderfully made in the “Image Of God,” a notion closer to the Filipino word kawangis ng Diyos and not kamukha or lookalike.

In his splendid strictly scientific article “The Uniqueness of Man,” Sir Julian Huxley (1947) firmly held the opinion that the human being appears to be a unique species (peculiaris) that has evolved in its own mode in an entirely new biological system.

The culture of life is not only the conviction of Christians. It is also a right fought for by contemporary society, evidenced by the fact that most civil (or civilized) governments around the planet has rejected death penalty.

Saint John Paul II, while in his 1995 encyclical Evangelium vitae (“Gospel of Life”), has at all times condemned the “culture of death… which encourages an idea of society excessively concerned with efficiency.” Mark the word “efficiency.”

The Philippines since mid-2016 has mastered a “more efficient” way of discarding so-called junkies (drug users and pushers) and other “suspected” criminals, who are deemed less human.

Killing them, in the mind of the Philippine President, is more economical (efficient) than rehabilitating them—because it is more efficient. Wiping them out wholesale is a pogrom that has become the outright conviction of his Cabinet and all the government machineries under the Department of Justice, Armed Forces of the Philippines and Philippine National Police.

In addition, the Philippine Congress is set to pass the fast-tracked bill on Death Penalty in 2017.

Our Saintly Polish Pontiff in his “Gospel of Life” insists that such kind of efficiency is “in a certain sense… a war of the powerful against the weak (whose) life is held to be an intolerable burden, and is therefore rejected in one way or another.”

Christianity promotes without end the living principle that the sick, disabled, parents in the home of the aged, the comatose, death convicts, drug addicts, the baby in the womb, all of them without exception, should be valued, welcomed and protected, regardless of contribution to society or lack of it.

The aged are not burdens to society. The handicap is not an enemy. The addicts are not useless numbers to be eliminated by “terminators” through death penalty or by EJK.

In the ancient times, among their pagan neighbors in the ancient East, most non-Israelite rulers claimed being deities, gods, or demigods among men; such were the cases of Egyptian pharaohs and the self-proclaimed Persian God-King Xerxes, whose word was everyone’s command, even in matters of life and death.

Against this historical-cultural background, the Book of Genesis intends to put forward the unmistakable story of human origin from the Divine Hands, lest the human being should misjudge himself to be some sort of a deity.

Man is not God or a demigod

Yes, man has a solemn dignity because he was created as imago Dei. But the Book of Genesis reminds that man himself is not God.

Unfortunately, in modern times, Adolf Hitler rose to become Europe’s powerful master who plahyed God, whose first victims were the Jews, considered by him as untermenschen or subhuman.

The same devaluation of human life occurred in such modern historical events as the China’s Great Leap Forward, USSR’s Great Purges, and Pol Pot’s Khmer Rouge, quite similar to the Nazi Holocaust and the Philippine war on drugs, when “the strong decides the fate of the weak” and, in the process, trampled human dignity

The Book of Genesis talks straight to the face of anyone who wants to play God without divine permission, including President Duterte himself and the members of the Philippine Congress; that nobody can just decide who among the junkies and hardened criminals live and who die.

‘Culture of life’ and Christmas

I recall how the expression “culture of life” entered popular parlance. It was when Saint John Paul II used it in 1993 in a World Youth Day tour of the United States, when the Vicar of Christ denounced abortion and euthanasia and all laws/practices destructive of human life.

Christianity believes in the human dignity of all and of everyone. That’s why Christmas Season is the most joyful of all seasons, imbued with the belief that God has given humankind some kind of HOPE.

Each citizen of the world is not only created in the “image of God.” God also so loved the world that He sent His only Son, by becoming One like us, by becoming a Jew, a true member of the homo sapiens, and dwelling among us. A blessed Christmas Season to all!