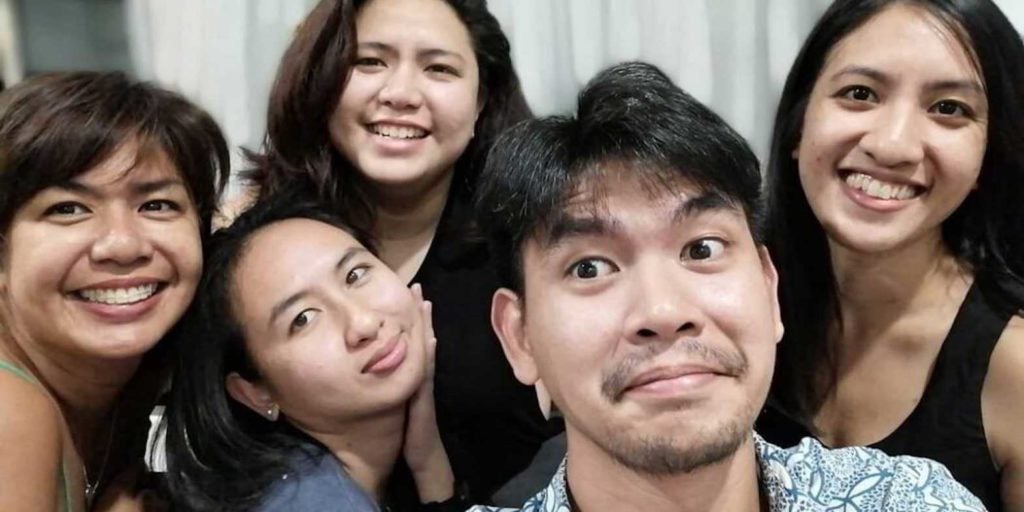 WASHINGTON, DC – The night before 26-year-old Patreng Non installed a community pantry on Maginhawa Street in her Quezon City neighborhood, she was on the phone with her older sister, Jenny, 32, who lives in Washington, D.C. They had been talking regularly over several months about dire conditions in the Philippines due to the pandemic and how job losses and unemployment have made life harder for the poor and low-income families. They talked about their day-to-day struggles, frustrated about the government’s slowness in providing relief.

But the phone conversation the night of April 16 took on a certain urgency. Patreng felt she needed to do something right away but didn’t know how. They brainstormed about mutual aid and how it worked. Jenny mentioned about having volunteered in community pantries in the DC metropolitan area, helping cook Filipino food Friday nights at St. Margaret’s Church, and delivering them to about 200 homeless and low-income families.

As Patreng listened to her sister, the idea of a community pantry sounded more and more appealing and doable. She didn’t get much sleep that night listing everything she needed to do the next morning: constructing a makeshift bamboo cart and using her savings to buy fruits, vegetables and other groceries. She also spent time on her computer googling about food banks and stumbled on a phrase that summed up what she had in mind all along: “Give what you can, get what you need.” After getting help from her mother to translate it, she scrawled the words on a poster board. “Magbigay ayon sa kakayahan, kumuha batay sa pangangailangan” (Give according to your ability, take according to your need) became the slogan that captured what Patreng envisioned.

A lifetime of community service

The message resonated widely. There are now more than 800 community pantries all over the country, thanks to Patreng and her family.

Jenny says their mother instilled a strong sense of helping and caring for the poor and needy when they were still kids. “When we were growing up in Marikina, there were always storms and floods and people spent days in evacuation centers,” recalls Jenny. “We were fortunate that our house was on a hill. Our mother saw an urgent need to help, so our whole family brought food and provided sleeping mats to the evacuees. At other times, we would help our mother, who is a social worker, carry medicines when she volunteered for medical missions to Laguna, or reach out to the urban poor in Manila. So, we were raised serving people and volunteering became a normal part of our life.”

Today, since the pandemic started, Jenny’s mother volunteers at hospitals and started a project called Bayanihan Marikenyo at Marikenya, which runs 31 kitchens that can serve about 500 needy people in their area.

She spent a month in the Philippines in 2008. While still in college, Jenny volunteered to teach Math in Tondo, in a program called “Food for Hungry Minds.” Today, she is an engineer by profession, continues to volunteer her services whenever she can. She is also actively involved with the National Alliance for Filipino Concerns (NAFCON) DMV, a US-based coalition oforganizations and individuals that advocates for the needs and concerns of Filipinos in the US and in the Philippines.

At a recent “Kuwentuhan with Ana Patricia Non about the Community Pantry Movement in the Philippines,” Patreng described how quickly all the goods were gone on the first day, with people still lined up. “They thought it was a rich person who set it all up,” she said. “When they found out it was only one of their neighbors, the first ones who came to pick up food also became volunteers.” 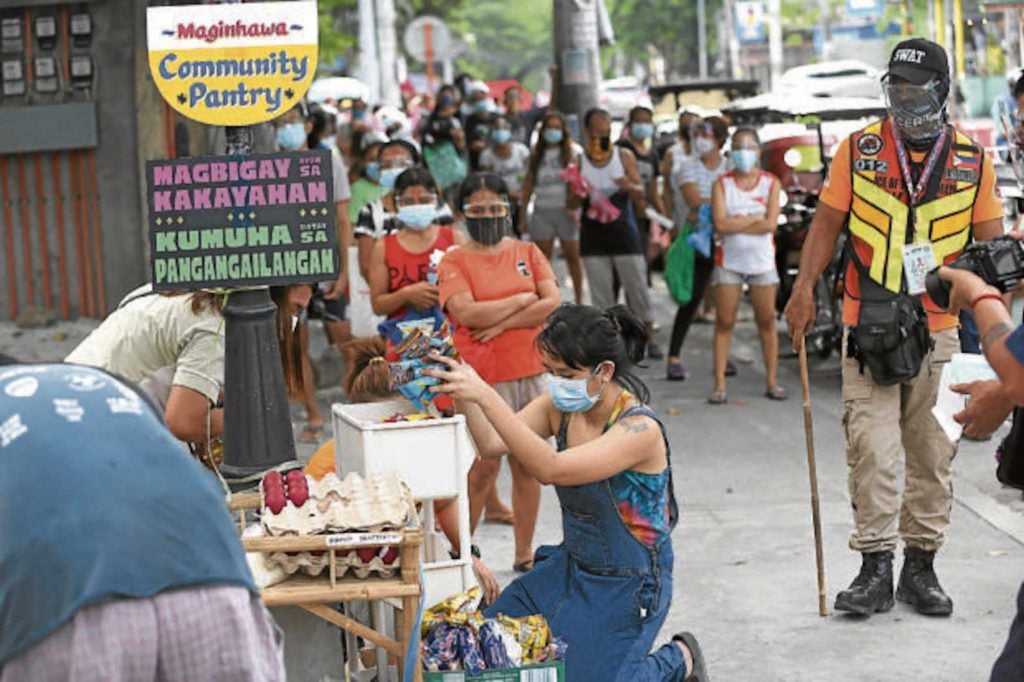 People line up to get free food supplies at the Maginhawa community pantry in Teacher’s Village, Quezon City, on Saturday, April 17, 2021, after the project went viral this week as more people donate food stock on a small shelf where underprivileged people can access it but are told to only get what they need.INQUIRER PHOTO / NIÑO JESUS ORBETA

People are just waiting for someone to take action because there is an urgent need, Patreng points out. “We simply don’t want people to starve.”

Although embarrassed by the media attention, Patreng said it provided security for her and the many volunteers who have been falsely branded as “communists.” The “red-tagging,” she says, is “very serious and alarming” because being linked to the NPA can get you killed.”

To Patreng, “the community pantry, no matter how modest, shows how we can help. Staying home and being safe is not an option. Our situation is dire. We need to help people survive. Our goal is to have a community pantry in every street corner, but this is only a temporary relief while we wait for our government to act.”

She also explained how this initiative complements, not competes, with small businesses or street vendors. “We actually purchase from them the goods that we give, so in a way we are honoring their livelihood and helping each other at the same time. It’s all about community.”

Jenny is encouraging Filipino Americans to “continue the bayanihan spirit” and support NAFCON’s call “to come together to collectively sustain these actions and contribute to the sustained provision of resources for the communities in need.”

The donation Link is: https://www.nafconusa.org/campaigns/communitypantryph/

“I was inspired by my baby sister to support the communities back home. I created a PayPal money pool to collect funds from my friends. This post was shared on social media, and it created controversy of why people in the U.S. would be helping community pantries in the Philippines. I have volunteered with NAFCON DMV in the last year. We have worked through many Bayanihan Campaigns in response to COVID-19, the food fundraisers for J-1 Workers and most recently the typhoon relief campaigns. I have learned a lot in the last year of how Filipinos in the DMV are concerned about Filipinos in the Philippines.

Two months ago, we even worked on a community wellness survey for our area, and asked our kababayans what are their main concerns during this time of the pandemic. 86 percent of the survey participants said that they are concerned for the livelihood of their families in the Philippines. It was no surprise to me that when the PayPal account was shared, that the response from our Filipino communities in the U.S. was to support the community pantries. Filipinos are known for their generosity, and supporting the community pantries is a cause that we can all get behind. I am thankful that NAFCON USA has initiated the bayanihan campaign to support Community Pantries PH. I think this will allow more Filipinos abroad to support and be connected with the Filipinos back home. I encourage other national Filipino organizations to start their own community pantry fundraising efforts, or partner with NAFCON USA in this initiative.”