Pandemic-led decline of U.S. cities may be reversing

Pandemic-led decline of U.S. cities may be reversing

Fears that U.S. cities would be emptied by the coronavirus pandemic are giving way to potential signs of revival, according to a series of analyses that suggest any dislocation from the last year will prove temporary.

Some data suggest a return is already underway. Cellphone tracking firm Unacast had earlier noted that phone users were shifting their overnight locations out of New York, but now sees them coming back.

The turn may have begun last fall, when the usual seasonal jump in population centered around the arrival of college students roughly matched that of 2019, fewer people left the city than the year before, and “there was a large influx from areas surrounding the city, perhaps the return of some who left … at the height of the pandemic,” the company wrote in a new research report.

Manhattan and the Bronx “demonstrate particular resilience,” gaining 21,000 residents over the first two months of 2021. Three of New York City’s five counties surveyed by the company lost population, though one, Kings County, saw the pace of loss ease compared to before the pandemic.

Similarly, Bank of America economists wrote last week that they “don’t see evidence of a broad urban exodus,” a conclusion that combined analysis of the company’s own card spending data as well as a survey of other reports.

Expensive markets like New York City and San Francisco saw an already established trend of population loss accelerate, Bank of America analysts wrote. But they noted that people tended not to move far. And with home sales and rental prices having dropped in those locations, the large numbers of younger people who stayed with parents during the pandemic may now be ready to get places of their own. 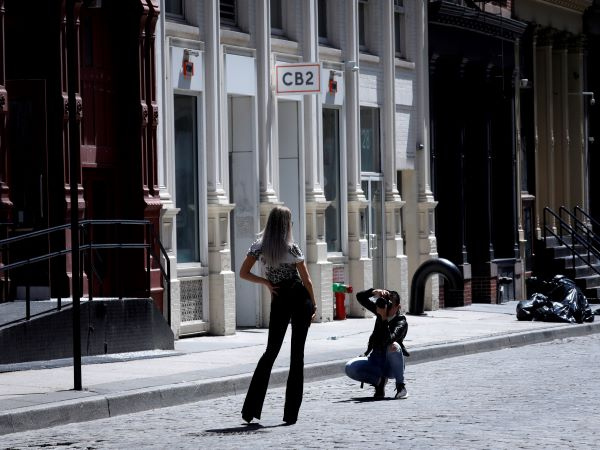 A model poses for a photographer on an empty street in front of closed shops in Soho in Manhattan during the outbreak of the coronavirus disease (COVID-19) in New York City, New York, U.S., May 26, 2020. REUTERS/Mike Segar

“We believe both have the potential for some recovery in the near term. NYC and SF remain premier cities for young renters,” the bank’s analysts wrote. “With the share of young adults living at home reaching record highs in 2020, there could be some pent-up demand.”

Those and other analyses downplaying any big shift in migration patterns due to the pandemic are just one indication that the long-term economic consequences of the past year may not be as deep as feared.

A lot remains to be determined. There are about 4 million fewer people either working or looking for work than before the pandemic, for example, with many of them sidelined either by health concerns, closed schools, the lack of available child care, or other ongoing disruptions to daily life. It remains unclear how fast those problems will ease and how quickly those people will return to jobs or the hunt for jobs.

The permanence of work-from-home rules could have a bearing as well on the economic life of cities, and particularly on the fate of office buildings and the businesses surrounding them independent of whether the permanent population is growing or not. New research from economists Jose Maria Barrero, Nicholas Bloom and Steven J. Davis suggests spending in cities may suffer a permanent hit of 5% to 10%.

But a recent Federal Reserve analysis, for example, found the failure rate of businesses has been much less than anticipated. Levels of mortgage and loan defaults have not sky-rocketed as feared, and family bank accounts on the whole have remained healthy or even flush with savings from various federal relief efforts.

Ongoing COVID-19 vaccinations have raised hopes for a broader return to normal, even in denser urban locations.

A report earlier this year by real estate site Zillow concluded there was no broad drag on urban housing markets in 2020.

“Suburban homes sold faster than urban homes by the end of 2020, but home value growth, sales volume and Zillow web traffic in urban areas has kept pace with or exceeded levels in suburban areas,” the company concluded.

While the early narrative around urban population decline seemed stark and obvious, Cleveland Fed economist Stephan Whitaker said it may have conflated people leaving denser neighborhoods with fewer people moving in – an effect he tried to disentangle in a February study using consumer credit data which he said allowed a precise look at where people lived and where they had moved.

He concluded the pandemic impact was less about people leaving denser, more populous neighborhoods, and more about people not moving to those areas, a finding consistent with younger adults holed up at parents’ homes delaying their departures.

“Out-migration did increase in many urban neighborhoods, but the magnitudes probably would not fit most definitions of an exodus,” he wrote. “What is certain is that hundreds of thousands of people who would have moved into an urban neighborhood in a typical year were unwilling or unable to do so in 2020.”