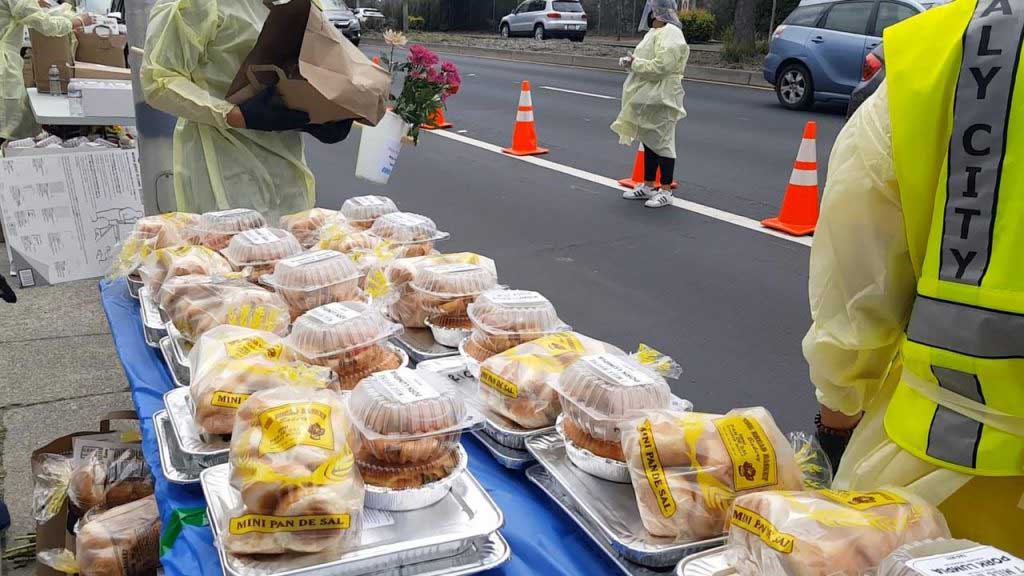 DALY CITY, California – A pioneer Filipino American nonprofit here is among the many California entities opened its doors to a new site and resumed service after shutting down for safety due to the pandemic.

The Pilipino Bayanihan Resource Center or PBRC held its first official event since March 2020, welcoming families throughout the area from 1-3 p.m.,, Saturday, May 1 with a drive-through community food and safety kit distribution.

The first 150 drive-through visitors to the new offices on 200 Northgate Avenue here received a full Filipino meal of chicken adobo, pancit, lumpia shanghai and rice plus a tote filled with a flashlight, sanitizer and mask.  A $5 gift card from Target was given will to a maximum of 4 people at least 13 years old in each vehicle.  Gifts are available while supplies last.

Recipients were encouraged to drive through and discouraged from dropping in.  The contactless process requested drivers to pop the vehicle trunk for volunteers to place in the food and totes.

“We are grateful just to be here,” Perla Ibarrientos, the heart and soul of the organization, told Inquirer.net. “When I say ‘we,’ I mean our members, small staff and big group of volunteers who donated funds for the food and safety kit or helped prepare and distribute the items.”

Ibarrientos, who is also a member of the Daly City Personnel Commission, recognized the Daly City Police Dept. who ensured orderly distribution of the gifts and the City of Daly City, a key benefactor that gave the once-traveling organization a brick-and-mortar headquarters almost 35 years ago.

“We probably wouldn’t be here without the support of the leadership of our town that has acknowledged the vibrant presence of Filipino Americans,” said Ibarrientos. “Neither could we have fulfilled this event without our friends in the health profession like Dr. Tony Wong and Seton Medical Center or in the food industry like Willy Carandang of Hapag Filipino and the faith community like the Broadmoor Presbyterian Church.”

For over a year, PBRC suspended most of its programs to protect staff, volunteers and participants in the earliest days of the coronavirus emergence in this country. Observing strict safety guidelines, the organization managed to make its presence felt by the newly isolated, displaced and depressed.

At the height of the Covid-19 last spring, crisis-weary Filipino Americans got a surprise jolt of joy with an all-morning distribution of  chicken adobo meals to anyone driving by the curb of the white building on 2121 Junipero Serra Boulevard.

PBRC saved Mother’s Day 2020 for hundreds of people who were on furlough or had lost their jobs while businesses closed down to prevent spread of the coronavirus. The distribution marked the second in what has become a Mother’s Day tradition for the organization.

That event returned the organization back to its grassroots beginnings.  It unified established members of the community to share their blessings with newcomers and longtime residents in unforeseen want.

“For us old-PBRC soldiers, the biggest accomplishment was in 1996, when Congress tried to cut the funding for non-U.S. citizen benefits by changing the social security laws,” Liangco told INQUIRER.net.  “Monica Abello, Bullet Marasigan and Rolly Recio rallied a community-led mass naturalization effort.  In two months, with the help of countless community volunteers and little monetary support from Monica’s government agency, PBRC helped naturalize over 900 seniors of all races thereby preserving their benefits if the proposed draconian social security laws were passed.”

Liangco recalled how PBRC lobbied the county for alternative youth activity funding and with Recio and MC Canlas leading its youth-gang intervention work.  They received funding from the county Dept. of Health to launch athletic leagues, dialogues between youth gang groups, and smoking cessation projects.

Its leadership changed with the membership, broadening programs.

Time flew and suddenly it was 2021: A new President and the first woman Vice President of the United States swore in as the coronavirus death toll hit a half-million, not one or two but three vaccines were developed and rolled out, a recall campaign was launched against California Governor Gavin Newsom who nominated – Assembly Member Rob Bonta for FilAm Attorney General for the state and Mother’s Day is on the horizon anew.

The organization’s board of directors approved 200 Northgate Avenue in the residential section of  Westlake District south of John Daly Boulevard as its new home.

“It’s ideal,” Ibarrientos said of the Doelger Arts Center, a sprawling facility with several rooms and a playground.  “There’s plenty of space for parking and we have a room large enough for community events.”

Ibarrientos had visited the site with City Manager Shawnna Maltbie, then-Library & Recreation Dept. Director Joseph Curran and Maltbie’s executive assistant Leilani Ramos in June.  Nine of PBRC’s 13-member board of directors later toured the same site and agreed to move in the fall.

“We’ve always known we would have to vacate the previous site at some point,” said Ibarrientos, who serves on the city’s Personnel Commission.  “Through the generosity of the City of Daly City, we were able to conduct our activities there since the late 1980s.”

Grateful organization’s officers began hauling in furniture and were settled in at the new offices around Thanksgiving Day.

The only program that resumed was Eskabo because the martial law exercises could be done outdoors.  Tai-chi classes were suspended.  Immigration clinics were referred out to Asian Pacific Islander Legal Outreach or APILO offices in San Francisco.

Storms typically visit the Philippines toward the last four months of the year and did so with a vengeance in early November.

Typhoon Vamco/Ulysses hammered Cagayan Valley from Nov. 8 through Nov. 15, killing 73, damaging 67,000 homes and displacing 280,000, according to the UN Office for the Coordination of Humanitarian Affairs.  The Incessant downpour swelled the Cagayan River, the country’s longest, resulting in floods that affected upward of 3.6 million people.

“We could not turn our backs on fellow Filipinos in the home country,” Ibarrientos explained the occasional shift of support across the Pacific.

The Junipero Serra building that housed the old PBRC sat in a redevelopment area.  The Planning Commission on June 2 approved development of a complex that would include construction of a two-story events center with parking for Duggan’s Serra Mortuary and a fulfillment center with an 11-story tower, vehicle elevator and surface parking for used-car sales dealership Carvana.

The new PBRC home sits in a residential area that is a bit of a trek from the nearest bus stop.  Ibarrientos said that older clients who may be reluctant to participate in upcoming programs may access affordable transportation programs provided by nonprofits in the county.