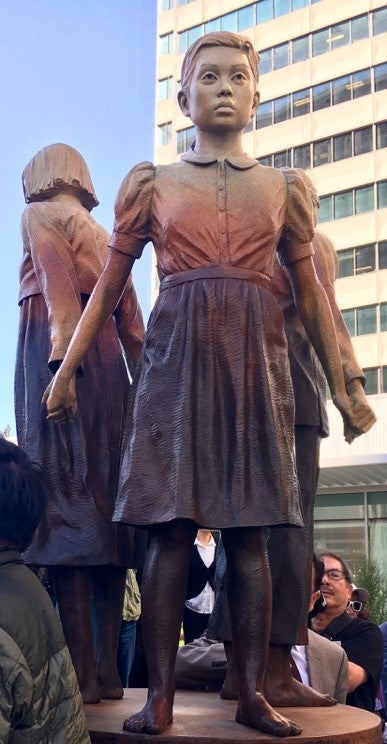 SAN FRANCISCO — A surviving South Korean “comfort woman” went back to this city to witness the unveiling of memorial in honor of victims who suffered sexual abuses done to thousands women and girls like her from 13 Asia-Pacific countries by the Japanese Imperial Army Forces from the early 1930s to 1945. She had waited for this unveiling for two years.

The monument created by English-born sculptor Steven Whyte shows Grandma Haksoon Kim, the first victim who broke her silence in 1991, in a traditional Korean traditional dress, looking at three life-sized girl statues in traditional Korean, Chinese and Filipino dresses, holding hands on top of a cylinder. The memorial site is at the St. Mary’s Square Annex at California Street in San Francisco.

Yong-Soo Lee, fondly called “Grandma Lee,” flew in straight from South Korea. She profusely thanked everyone for the monument dedicated to “all our grandmothers who are alive, and all those who have passed on but are still with us in both spirit and memory,” said a Comfort Women Justice Coalition (CJWC) statement.

In an interview, Whyte admitted knowing little about the existence of the comfort women before the competition he won over more than 30 entries from all over the globe.      `

“I knew of the theme of the memorial but did not know of their suffering. So when we entered the competition, we did the research and I decided that this is something I wanted to win. And because it was local and the subject not easy to deal with, it was a challenge,” Whyte admitted. The Filipina girl with a scarf represents Filipina comfort women during World War II in the Philippines. IRMA BAJAR

“As to winning the competition, I was comfortable and happy with the design I submitted which, for me, is rare. I was just trying to get the story across and wanted people to look at the vulnerability of these girls and they survived with their strength.”

For her part, Grandma Lee, in a speech delivered in Korean and interpreted for her, stressed that the memorial is not just an issue for Korea, China and the Philippines, it is a universal human rights issue that affects everyone in the world.

“People are making so much effort to make this world a better place for everyone. This history issue is not one that just happened in the past. This is not about money. This is about a sincere apology from the government of Japan, which is important. Sincere apology has to come with a legal compensation. We have to work with Chinese people and other ethnicities because we are all humans who share the same emotions,” Grandma Lee noted.

Hate the crime, not the people

“We hate the crime not the people, so Japan must acknowledge what they did, the crime they committed and apologize to us. In the end we will have a memorial in downtown Tokyo so the people of Japan will know what happened in the past and they will express their regret whenever they pass by.”

Among those that Grandma Lee particularly thanked were retired San Francisco judges and CWJC leaders Lillian Sing and Julie Tang who worked with the City of San Francisco Arts Commission on Parks and Recreation to select the location, the design and inscription for the purpose of the monument right after the Board of Supervisors unanimously passed a resolution for the memorial in September 22, 2015.

CWJC calls on Japan to make a sincere, official and legallybinding apology, pay full reparations to the victims and their families, conduct a thorough investigation of the crime, punish those found guilty in a court of law, memorialize the victims and continue to teach its citizens an accurate and truthful history of Japan during its era of imperial expansion and World War II. CWJC leaders and retired San Francisco judges Lillian Sing (right) and Julie Tang (left) who worked with the City of San Francisco Arts Commission on Parks and Recreation to select the location, the design and inscription for the purpose of the monument. INQUIRER/Jun Nucum

Also at the event was Japanese-American former California Congressman Mike Honda who sympathized with the victims of sexual slavery of 1930s to the end of World War II who decided to break their silence in 1991.

“Through the media we would be able to educate the rest of the world. We are not talking against the Japanese people but prime minister Abe and the Liberal Democratic Party (LDP) who consistently says what happened was a shame then on the other hand they denied what had happened to the comfort women,” lamented Honda, who also criticized the decision of Japanese Prime Minister Shinzo Abe to not apologize and recognize the responsibility of the Japanese government to make the information available in school textbooks.

Filipina CWJC member Marily Mondejar said she joined and became very active with the CWJC because she thinks it is very important to have a reminder that women are being used as weapons of war. UK-born sculptor of the memorial Steven Whyte admitted knowing little about the existence of the comfort women and of their suffering. INQUIRER/Jun Nucum

“It was not really until 1991 that the first comfort woman survivor came out and told her story. Then I met in 2003 Eve Ensler who wrote the ‘Vagina Monologues.’ She told me she saw the comfort women survivors in the Philippines. Soon after, I was able to meet them myself,” recalled Mondejar. She also revealed that she has friends in the Japanese American community who were against this memorial as they felt it was putting them down.

“I feel great being here finally for the unveiling of the memorial. I feel wonderful. We raised the money and were able to get St. Mary’s garage people to donate the space,” Mondejar beamed.

“In the monument, the one with the bandana Is the Filipina girl. We had to find sample dresses worn by young Filipinas in the 1940s and this was the closest that we had. There was a model that they chose who happens to be half-Filipina and half-American.  We made her use the bandana that looked like those immortalized depicted by Amorsolo’s in his paintings. This was also used by the Filipina model to differentiate her from the Korean and Chinese girls.” Filipina Women’s Network head Marily Mondejar thinks it is very important to have a reminder that women are being used as weapons of war. INQUIRER/Jun Nucum

Irma Shauf Bajar, national chairperson of Gabriela USA, described the unveiling as a very emotional event, specifically remembering the initial efforts of the likes of Lola Rosa Henson who was the first to come out as a Filipina comfort woman and whose brave decision to come out prompted other Filipina comfort women to organize the group Lila Pilipina and narrate their own experiences.

“It does not help that we have President Duterte who continues to make comments and jokes about rape and even tells the AFP to rape our own mothers and girls. In wars, the most vulnerable will always be the women, girls and children,” Bajar added.