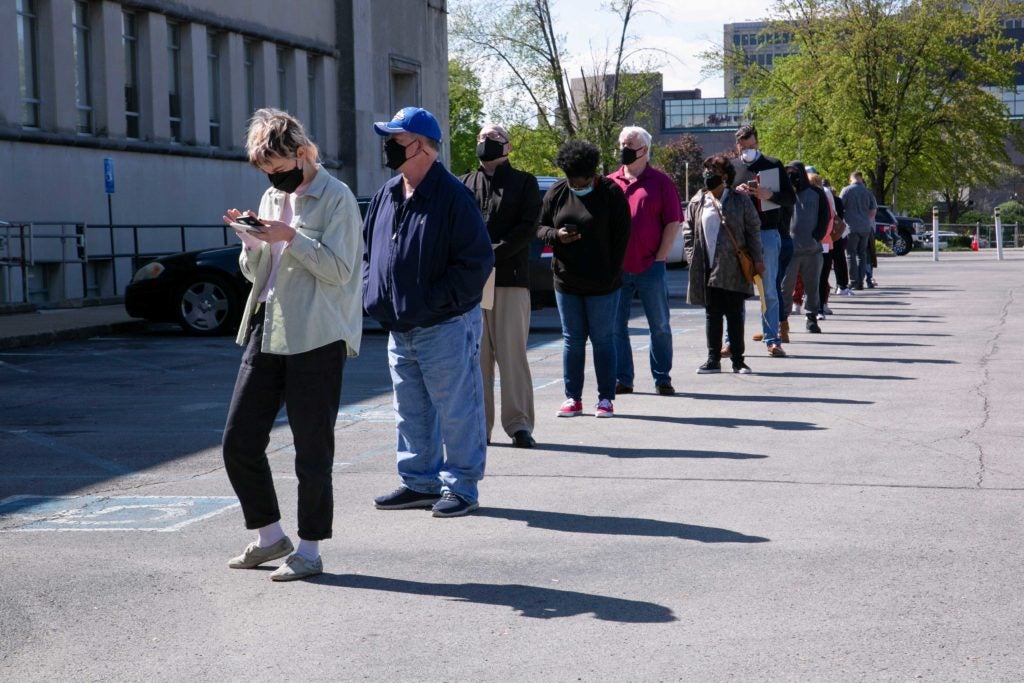 WASHINGTON – U.S. economic growth accelerated in the first quarter, fueled by massive government aid to households and businesses, charting the course for what is expected to be the strongest performance this year in nearly four decades.

The United States’ economy is rebounding more quickly compared to its global rivals, thanks to two additional rounds of COVID-19 relief money from Washington as well as easing anxiety over the pandemic, which has boosted domestic demand and allowed services businesses like restaurants and bars to reopen.

The second-fastest gross domestic product growth since the third quarter of 2003, reported by the Commerce Department on Thursday, left output just 0.9% below its level at the end of 2019. Economists expect a full recovery from the pandemic recession, which started in February 2020, in late 2023.

The report is a boost for President Joe Biden as he celebrated 100 days in the White House.

“In early 2021, the economy was served a strong cocktail of improving health conditions and rapid vaccinations along with a fizzy dose of fiscal stimulus and a steady flow of monetary policy support,” said Lydia Boussour, lead U.S. economist at Oxford Economics in New York. “Looking ahead, we foresee the economy’s spring bloom turning into a summer boom.”

GDP increased at a 6.4% annualized rate last quarter, the government said in its advance estimate for the first three months of the year. That followed a 4.3% growth rate in the fourth quarter.

It was the biggest first-quarter increase in growth since 1984. Economists polled by Reuters had forecast GDP growth would increase at a 6.1% pace in the January-March period.

That was followed by nearly $900 billion in additional stimulus in late December. The Biden administration offered another $1.9 trillion rescue package in March, which sent one-time $1,400 checks to qualified households and extended a $300 unemployment subsidy through early September.

The Federal Reserve on Wednesday acknowledged the burgeoning domestic activity, but the U.S. central bank gave no sign it was ready to reduce its extraordinary support for the recovery.

The rapidly accelerating economy could dampen enthusiasm among some moderate Democrats for Biden’s ambitious economic agenda. Biden on Wednesday unveiled a sweeping $1.8 trillion package for families and education in his first joint speech to Congress. Republicans oppose more stimulus, now worried about swelling debt. The new package and an earlier infrastructure and jobs plan total around $4 trillion, rivaling the annual federal budget.

U.S. stocks opened higher. The dollar was steady against a basket of currencies. U.S. Treasury prices were lower.

For a graphic on The rebound: ‘Nominal’ U.S. economy at a record:

There are concerns among some economists that the massive government funding could ignite inflation. Many economists, including Fed Chair Jerome Powell, expect higher inflation will be transitory, arguing that the labor market remains 8.4 million jobs below its peak in February 2020.

Though the labor market recovery is back on track, it will probably take a few more years to recover the more than 22 million jobs lost during the recession. In a separate report on Thursday, the Labor Department said initial claims for state unemployment benefits fell 13,000 to a seasonally adjusted 553,000 during the week ended April 24.

Data for the prior week was revised to show 19,000 more applications received than previously reported. Though claims have dropped from a record 6.149 million in early April 2020, they remain well above the range of 200,000 to 250,000 that is viewed as consistent with a healthy labor market.

There were 16.6 million people receiving unemployment benefits in the first week of April.

“We’re still probably a couple years away from pre-pandemic employment levels, but based on the powerful economic momentum built up in the first quarter, we should return close to a fully-functioning economy in the second quarter,” said Robert Frick, corporate economist at Navy Federal Credit Union in Vienna, Virginia.

The economy continued to power ahead early in the second quarter, with consumer spending vaulting to a 14-month high in April, thanks to the fiscal stimulus and the expansion of the COVID-19 vaccination program to all American adults. Americans have accumulated at least $2 trillion in excess savings.

Economists forecast growth this year could top 7%, which would be the fastest since 1984. The economy contracted 3.5% in 2020, the worst performance in 74 years.

Growth in the first quarter was also driven by business spending on equipment, which posted a third straight quarter of double-digit expansion. But business investment in nonresidential structures such as mining exploration, shafts and wells declined for a sixth straight quarter.

Residential investment contributed to GDP growth for a third straight quarter. But trade was a drag for the third consecutive quarter as some of the robust domestic demand was satiated with imports. Strong consumption meant fewer unsold goods in warehouses, which resulted in inventory accumulation subtracting from GDP growth.