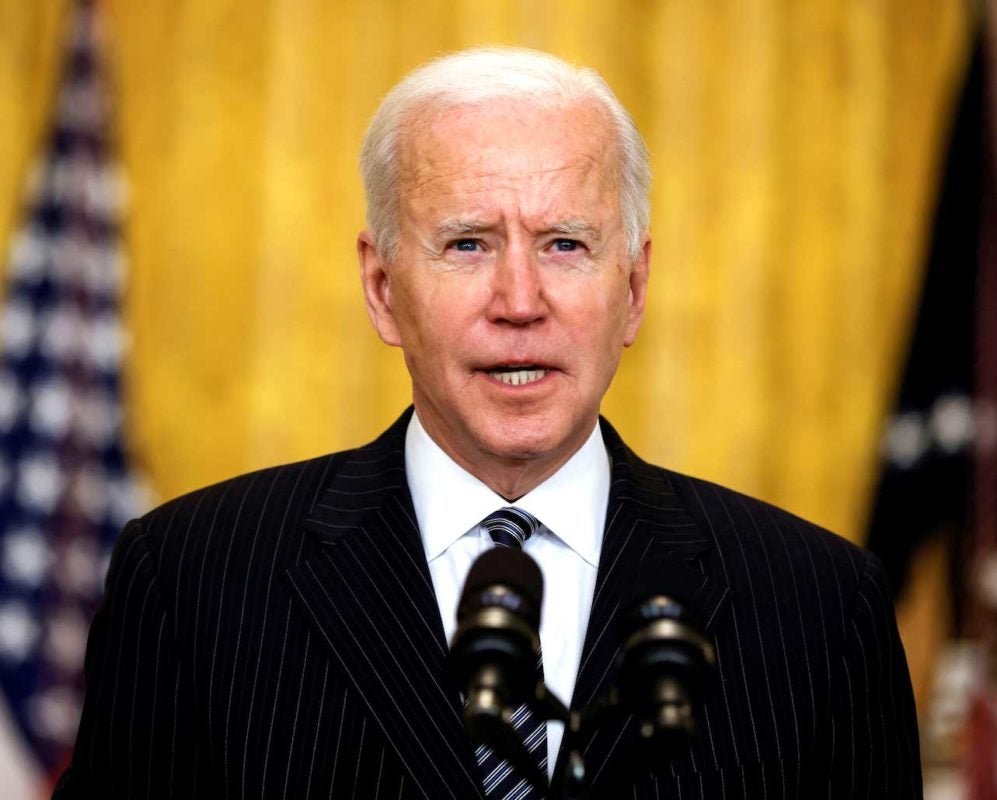 U.S. President Joe Biden speaks about the state of vaccinations during a coronavirus disease (COVID-19) response event in the East Room at the White House in Washington, U.S., March 18, 2021. REUTERS/Carlos Barria/File Photo

NEW YORK – More than half of Americans approve of President Joe Biden after nearly 100 days on the job, according to Reuters/Ipsos polling, a level of support that his Republican predecessor Donald Trump never achieved and one that should help Democrats push for infrastructure spending and other big-ticket items on Biden’s agenda.

The national opinion poll of 4,423 adults from April 12-16 found that 55% approved of Biden’s performance in office, while 40% disapproved and the rest were not sure.

Biden received the highest marks for his handling of the coronavirus pandemic, with 65% supporting his response. In January, 38% approved of Trump’s handling of the health crisis. Ninety-percent of Democrats, 61% of independents and 39% of Republicans said they approved of Biden’s response, the poll showed. https://tmsnrt.rs/3xpA1qK

Fifty-two percent of Americans also said they liked Biden’s handling of the economy and 53% said the same about his impact on U.S. jobs, which in both cases were a few percentage points higher than Trump’s marks on jobs and the economy during his final month in office.

But Biden received his strongest criticism on immigration, as his administration continues to grapple with a surge of migrants arriving at the U.S.-Mexico border: 42% approved of the president’s border policy, while 49% disapproved.

More than half gave Biden strong marks for bipartisanship, though Democrats were much more likely than others to credit Biden for unifying the deeply divided electorate. Fifty-six percent approved of Biden’s efforts, including 88% of Democrats, 23% of Republicans and 48% of independents.

Americans were also generally supportive of Biden’s stance on the environment and racial inequality, with 54% and 51% approving of his record so far, respectively.

Biden is benefiting somewhat from circumstances that are beyond his control. He had months to prepare his pandemic response before becoming president, and some coronavirus vaccines were already in use before his Jan. 20 inauguration. Biden’s economy also has the advantage of being compared against the 2020 pandemic recession, when employers shed millions of jobs as COVID-19 shuttered businesses and schools.

Still, Biden’s approval numbers reflect popular support for his ambitious agenda, including a $1.9 trillion economic stimulus package and should help him pursue other initiatives, said Julian Zelizer, a political historian at Princeton University.

Biden is now pushing for a $2 trillion infrastructure plan that many Republicans oppose, and he is expected to propose tax hikes on the wealthy to raise money for childcare and other programs for American workers.

His popularity will help Biden keep his party together, Zelizer said, blunting malcontents on both the progressive and moderate wings of the party, and possibly tempering opposition from some Republicans, especially those in politically competitive states.

Lyna Sandau, a 75-year-old Republican from New York City, said she admires how Biden has aggressively supplied the United States with vaccines. Sandau voted for Trump last year, but if the election were held again, she would probably back Biden.

“What can I say, he seems to be trying,” she said.

Republicans largely oppose Biden, with only about 20% supporting the president, but those numbers have not changed much over the past year. Biden so far has been able to counter that with near-unanimous approval among Democrats and strong support among independents.

About 90% of Democrats approve of Biden, while 8% disapprove. Among independents, 51% approve and 39% disapprove. https://tmsnrt.rs/3xkv0Qh

Most presidents enjoy at least a brief period of elevated popularity, and Trump’s favorability numbers also rose when he entered office four years ago. But they declined a few weeks later as he pushed to ban travel from Muslim countries.

Biden’s popularity, meanwhile, has grown over the past year among a broad cross-section of the American population, not only among the white college graduates who helped put him in the White House, but also among the traditionally conservative non-college whites who still dominate the electorate in many places.

According to the April poll, 61% of white college graduates and 46% of whites who did not get a degree said they have a favorable view of the president, which is up 7 points and 6 points, respectively, from a year ago.

Biden also has become more popular over the past year among racial minorities, with 68% of Hispanics expressing a favorable view of Biden, up 12 points from last April. https://tmsnrt.rs/3evjXuV

The latest poll also shows more Americans – 40% – think the country is headed in the right direction than at any other time in the last decade.

That is about as good as a Democrat should expect in such a hyper-partisan political environment, said Robert Shrum, a Democratic strategist and political scientist at the University of Southern California.

Republicans will likely continue to oppose Biden en masse, Shrum said. But Democrats could counter by pushing for policy initiatives that are popular among conservatives too, such as rebuilding roads and expanding internet access.

“It is very useful to have Republicans who may not give you a high job rating out in the country agree with some of or many of the steps that you want to take,” Shrum said.