Maraming salamat, Patreng Non - here’s why they’re afraid of you

Maraming salamat, Patreng Non – here’s why they’re afraid of you 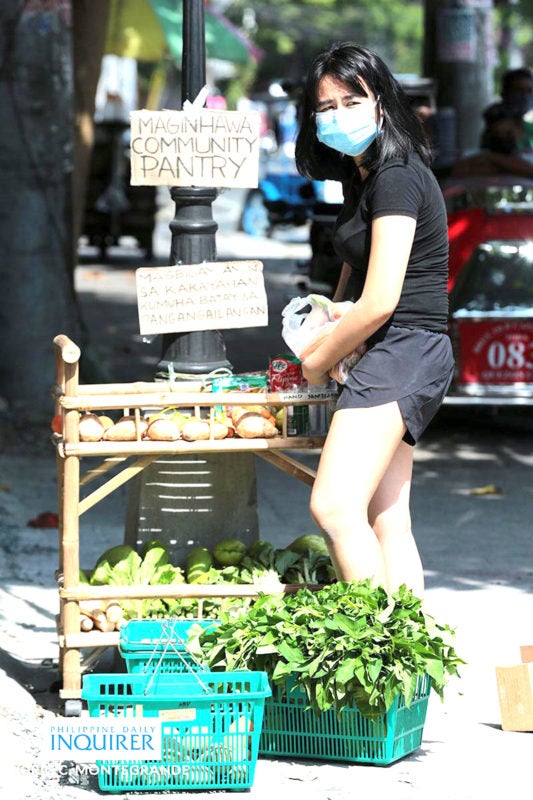 Ana Patricia Non refills the ‘Maginhawa Community Pantry’ on Thursday, April 15, which she set up to help people badly affected by the pandemic. INQUIRER FILE

In a way, it is not surprising that the slogan you chose for the Maginhawa Street Community Pantry, which has become a battle cry of sorts across the archipelago,  frightens Duterte and his supporters.

“Magbigay ayon sa kakayahan, kumuha batay sa pangangailangan.” “From each according to his ability. To each according to need.” That’s the socialist dictum, coined by Karl Marx. Sure, communists have also used it. But they don’t own it. Nobody does. They’re not the only ones who have embraced the noble principle.

Besides, it is truly strange that those accusing you of being a dangerous communist actually worship and follow a president who has surrendered Philippine sovereignty to the Chinese Communist Party — a ruler who initially embraced and was embraced by the Communist Party of the Philippines.

I admire the way you have handled the attacks. You respond to them when necessary, but then you just move on with helping Filipinos at a time when many badly need the help.

In a moving profile, my friend, the journalist Cris Yabes, wrote of how you inspired a revolution. “The spontaneity of her goodwill and how it sparked hope in others across the country had been missing in the country for quite some time, a country that has been growing apart under President Duterte.”

You reminded us of a powerful idea — that we are one community, that in these dark times, we are responsible for one another for that is how we can survive and thrive as a nation.

Dutertismo rejects that idea. Dutertismo is terrified of it. Dutertismo would spit on that way of viewing the nation and the world.

But it doesn’t matter. That didn’t stop the idea from spreading throughout the archipelago. You reminded us that there are many reasons to be hopeful.

It is easy to forget that sometimes. It is easy to lose hope. I’ve felt that way many times, not just during this crisis, but even in past crises. In fact, the movement you helped start reminded me of what another friend, Raphael ‘Popo’ Lotilla, told me many years ago at a time when I was again feeling discouraged and hopeless about our country.

In a 1991 handwritten letter that was part pep talk, part lecture, Popo told me, “As to the matter of hope, your faith and mine in humanism will sustain it.”

“For as long as these islands are inhabited by people, there will be hope and plenty of it,” he said. “The challenge is in preserving the humanity of our people and perfecting it. They have not lost hope in Burkina Faso either, have they?”

“For as long as these islands are inhabited by people, there will be hope and plenty of it. The challenge is in preserving the humanity of our people and perfecting it.”