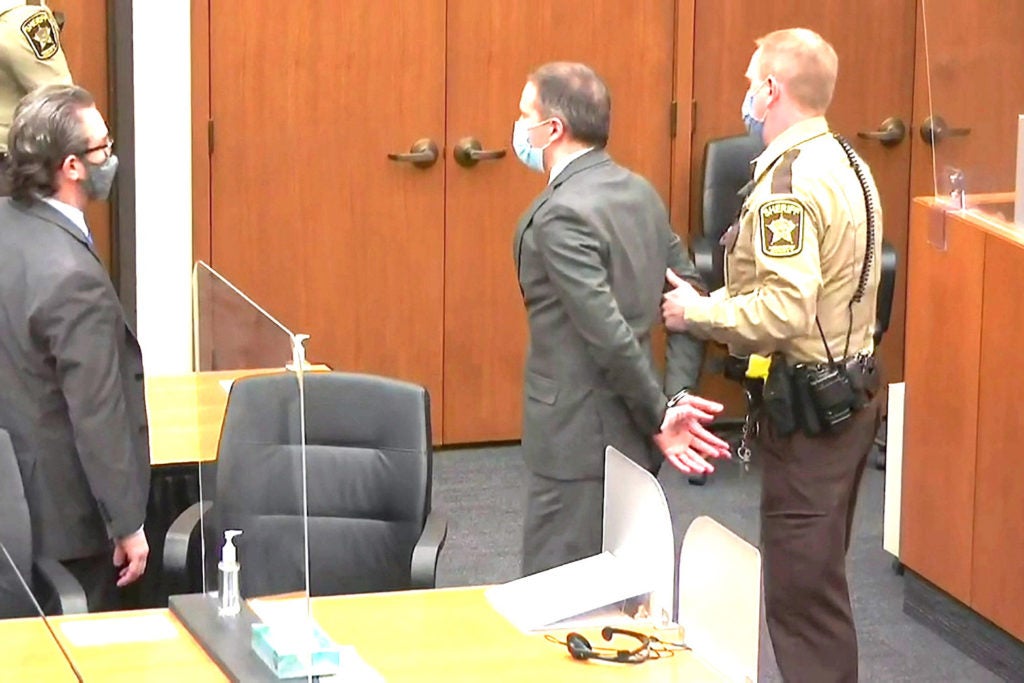 Former Minneapolis police officer Derek Chauvin is led away in handcuffs after a jury found him guilty of all charges in his trial for second-degree murder, third-degree murder and second-degree manslaughter in the death of George Floyd in Minneapolis, Minnesota, U.S. April 20, 2021 in a still image from video. Pool via REUTERS

A week later and the reverberations of the Chauvin verdicts are  over. People are still wondering how it happened. But the answer is simple.

The jury saw Floyd as a human being.

“Duh?” No, not “duh.” Not in a racist us vs. them world that gives us an American justice system where people of color are too often seen as criminally subhuman.

And where does all that leave the Filipino? The system doesn’t even know what to make of us–if they see us at all.

The Chauvin jury saw George Floyd as human. That only happened because people in the jury were like George Floyd.

I caught the verdicts while livestreaming on my Facebook Live program @2pm Pacific. All I could hear were the key words: “ Guilty….Guilty….Guilty.”An astonishing triplet.

A cop lost in court. You could hear the relief of an entire nation. Few were confident of the outcome. But I was hopeful, because of the absence of a longstanding enemy of justice: the all-white jury.

There’s no more feared phrase among civil rights activists and lawyers. But that’s not what Minnesota gave us in the Chauvin trial.

The jury that decided the fate of Chauvin, the white officer who had his knee on the neck of a Black man, George Floyd, was more diverse than the Minnesota county where the trial was held.

That made the actual odds of getting justice a lot higher than anyone could have imagined.

How much lower would the anxiety level be if the 12-member jury were a true reflection of Hennepin with just nine white people? Not much.

So let’s give diversity its due. The Chauvin jury included six whites–two male, four female. And there were four Black people (three of whom are male, plus a 60-year-old Black woman). The remaining two jurors were multiracial.

But race is one component. What did they think of the police? The questionnaires the jurors filled out asked about policing, protests and criminal justice.

One of the jurors selected was a white man in his 20s, who was the only juror who said he had not seen the cell phone video of Chauvin with his knee on Floyd’s neck. The man, a chemist, said in his questionnaire, “I rely on facts and logic and what’s in front of me.”

To me that sounded like a guy who might want to see some evidence again, indicating the potential for a long deliberation, not a quick one.

But many of the other jurors, according to reports, sounded fairly even-handed. Like the Black man in his 30s who said he had not seen the cell phone video in its entirety, and didn’t believe Chauvin “set out to murder anyone.” But he was concerned how three officers on the scene stood by and didn’t take action.

That kind of a juror had to like the prosecution’s skillful presentation anchored by that notorious 9:29 minutes of cell phone video showing Chauvin with a knee to the neck of Floyd.

“You can believe your eyes,” said prosecuting attorney Jerry Blackwell in the opening.

Steve Schleicher, the other prosecuting attorney, repeated it in the close, and added, “This wasn’t policing. This was murder.”

In the end, the jurors weren’t gaslit by the defense, who presented alternative theories as to how Floyd died. Heart attack? Drugs? Carbon monoxide? Jurors could already see for themselves how Floyd died—in that video. It showed anything but “reasonable” policing. It was Chauvin’s smoking knee.

For me, the key witness was the boss himself, Minneapolis Chief Medaria Arradondo, testifying that Chauvin violated the department’s use of force policy. How could Chauvin counter that?

The guilty verdicts on all three complicated murder charges–second degree unintentional murder; third degree murder, and second degree manslaughter–could mean 40 years for Chauvin. Last year, he wanted to plea bargain to at least ten years, but former Attorney General William Barr wouldn’t approve it. He reportedly didn’t want to be seen as soft on Chauvin. Chauvin will probably serve the time concurrently, so he’s maybe looking to at most 15 years.

In the meantime, the verdicts are a triumph for the people– for anyone who has bumped up against a system that too often is biased in favor of the cops. But not this time.

But as Joe Biden said in his address to the nation, we can’t stop here. Tomorrow must come real police reforms. Just think how easy it would have been to acquit Chauvin had there not been cell-phone video showing the officer killing an innocent man?

For now, we savor the moment as an energizing reminder of how alive real justice can make us all feel.

Oh, and let’s not forget the diverse men and women who did the work, then delivered and affirmed their true and correct verdicts, reflecting the will of the jury.

Emil Guillermo is a journalist and commentator. He’s a columnist for the Inquirer.net’s North American Bureau. Twitter @emilamok   Vlog: http://www.amok.com