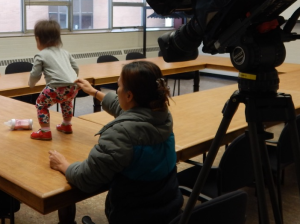 CALGARY, Alberta – Hiding from the view of the crowd, Lynn, 36, looks up at the video footage featuring her daughter. Tears falling down her face, she peeks from behind one-year-old McKenna Rose as if to shield her emotion.

“She doesn’t understand it now but this fight is not only for her but for other kids like her,” said Lynn (not her real name), during the launching of a campaign named after her daughter on International Human Rights Day.

Although McKenna Rose was born in Canada, she takes on the status of Lynn who has been without status since January. Thus, McKenna cannot get access to basic health services, except for free flu vaccines in order to protect her and those around her, in case she contracts seasonal influenza.

Just like most foreign workers who have come to Canada, the future seemed bright for Lynn.

She came to Canada under the Temporary Foreign Worker Program (TFWP) in 2010 as a restaurant and bakery manager in Colborne, Ontario. She was given a six-month contract but was laid off after only three months.

“I decided to come to Canada because of the good opportunity and the promise to become a permanent resident here,” she said.

After being unemployed for a year, an opportunity brought her to Edmonton, Alberta in November 2011 as a store supervisor, then as a manager for two years until 2014.

Having worked as a store manager for a fast-food company for 10 years in the Philippines, the work was nothing new for the business administration graduate and native of Tarlac.

Her hard work was paying off with a promise for permanent status through the province’s Alberta Immigrant Nominee Program (AINP), a pathway for high-skilled temporary workers to reside in Canada. She received a certificate of nomination in 2013.

“I thought everything will be okay,” Lynn said. However, she felt a district manager was treating her unfairly.

“I was put in graveyard shifts until three a.m. when bus service is no longer available. I had to wait until six in the morning for the first bus to come,” she said.

Oftentimes she was booked to come in at 10 o’clock the same day without adequate rest in between shifts. “As a store manager, I was often understaffed. It was really stressful,” she said.

She was forced to resign after her request for transfer to another branch was denied. She found a new employer in December 2014. While waiting for a new work permit from the government, she got pregnant and gave birth to McKenna Rose in September 2015.

By this time, her health coverage had expired. “After I gave birth, the hospital charged over $5,000 (Canadian) and billed it under McKenna’s name,” she said.

When McKenna was a week old and went for a follow-up exam, the walk-in clinic also billed Lynn. She had found out during this visit that McKenna Rose did not qualify for free health care. Canada-born McKenna Rose does not have access to free healthcare like other Canadians. INQUIRER/Jhong de la Cruz

Her certificate of nomination from the province — her ticket to apply for permanent status–had lapsed too as she was denied a new work permit in October 2015.

The single mother has sought the help of advocacy group Migrante Alberta, which has started a campaign dubbed “McKenna Rose Law” to ask the government to start acknowledging the rights of children born to parents without status in Canada.

In June, Migrante confirmed that children born to non-status immigrants receive health care for a fee following a response from Alberta Ministry of Health that stated the children take on the status of their parents.

“These children are being deprived of their birthrights as Canadians,” said Joy Santos, Migrante secretary-general.

“The backlog in the applications for AINP is one of the causes why foreign workers lose their status. They are being held hostage by this backlog and the federal government’s (now defunct) 4-in, 4-out rule,” she added.

For Lynn, Canada has become her second home. She has submitted her application to remain in Canada under humanitarian and compassionate grounds and will learn of the government’s decision by early next year.

“It’s unfair and I feel so sad because I worked hard and paid taxes. I consider this as my second home, contributed a lot by sharing my knowledge and skills to some Canadians,” she said.

“I am not a burden to any Canadian. I am asking the government to recognize the rights of my baby who is a Canadian…she must be treated like one,” she added.