A white policeman cleared of criminal wrongdoing after shooting an African-American man in the back last August in Kenosha, Wisconsin, igniting deadly protests that helped stoke a summer of U.S. racial tensions, has been returned to duty.

Kenosha Policeman Chief Daniel Miskinis said in a statement posted on Tuesday that officer Rusten Sheskey was back from administrative leave as of March 31, after an internal review found him to “have been acting within policy,” and would face no discipline. 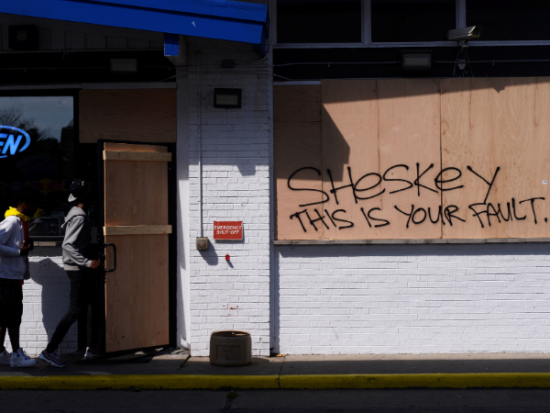 In January, Wisconsin prosecutors cleared Sheskey of any criminal charges in the Aug. 23, 2020, shooting that left Jacob Blake paralyzed and became a major flashpoint in nationwide protests for racial justice following the George Floyd killing months earlier in Minneapolis.

The Kenosha County district attorney concluded Sheskey acted in self-defense while responding to a domestic dispute and shooting Blake seven times at close range from behind.

Investigators found that Blake was armed with a knife and had resisted arrest, withstanding multiple Taser shots before he was gunned down.

The shooting unfolded in the presence of Blake’s young children.

Blake sued Sheskey in federal court in Wisconsin last month, seeking unspecified damages for his injuries and a “substantial sum” in punitive damages.

Two other officers who were likewise cleared of criminal wrongdoing for their role in the arrest and shooting were returned to full duty last July, after their actions were found to be reasonable and justified, policeman said then.

Best States to Live in the U.S.

“Although this incident has been reviewed at multiple levels, I know that some will not be pleased with the outcome,” Chief Miskinis said. “However, given the facts, the only lawful and appropriate decision was made.”

It was not immediately clear whether Sheskey was placed back on patrol duty.

Protests broke out last summer in response to viral cellphone video that showed Blake walking around the front of his car with Sheskey following him and opening fire after Blake opened the door to the vehicle.

But investigators have said the video was incomplete, failing to reveal that Blake was armed with a knife and that he had resisted arrest when policeman tried to detain him on a felony arrest warrant.

The shooting of Blake attracted a mix of civil rights demonstrators, anarchists and right-wing militias last summer to Kenosha, a city of 100,000 people between Milwaukee and Chicago.

At the height of those protests, teenager Kyle Rittenhouse opened fire with a rifle, killing two men and wounding another. Rittenhouse was charged with first-degree reckless homicide and five other criminal counts.