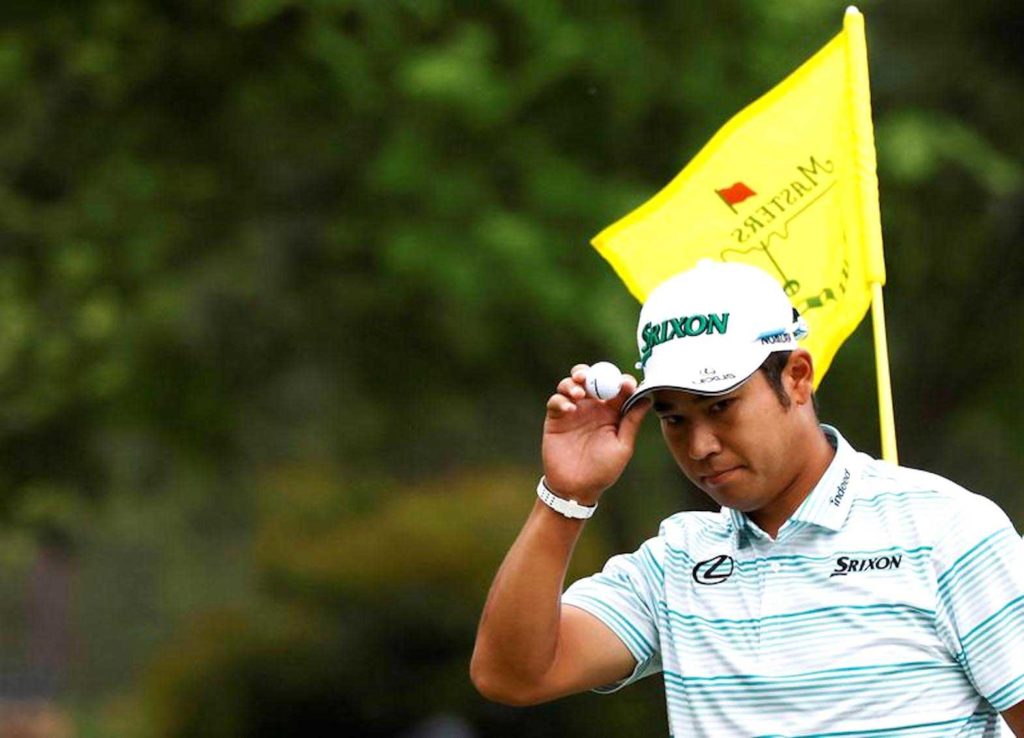 Japan’s Hideki Matsuyama acknowledges the crowd after holing his eagle putt on the 15th green during the third round. REUTERS/Mike Segar T

Hideki Matsuyama won the golf tournament this past weekend that really shouldn’t be called the “Masters” anymore. At least, not during a time when the homonym doesn’t immediately imply “masters of golf” but another group of “masters” in keeping with the roll back of voting rights impacting African Americans and other minorities in the tournament’s home  state of Georgia.

At the same time, Matsuyama’s win is being called a historic first–an Asian man winning the whole thing. But he’s not first. Vijay Singh from Fiji is South Asian and he won in 2000.

Considering the lack of wokeness in the general public about Asians and Asian Americans these days, I hope it doesn’t end up further confusing most of America who think Matsuyama is Asian American.

Normally,  it wouldn’t matter, but we live in a time when most people can’t tell an Asian from an Asian American. Of any ethnicity.

This is no small thing when the scapegoating we’re all feeling over the virus has lasted over a year now and includes transgressions from fighting words to murder.

Perhaps, you’ve also noticed, no one bothers to mention Atlanta these days, as the violent deaths of six Asian American women at the hands of 21-year-old Robert Aaron Long seem to have faded from the front pages.

Let’s not forget the women: Soon Chung Park, 74, who worked at Gold spa.

Hyun Jung Grant, 51, the single mother who worked at Gold Spa to support herself and her two sons.

Yong Ae Yue, 63, a worker at the Aromatherapy Spa.

Since the murders on March 16, the response has been predictable. While Asian Americans have been on edge, noting every transgression from major to minor, there’s actually been a debate led by white conservatives over hate crimes against Asians.

Opinion columnists from major dailies  blamed moralistic journalists and their wokeness for creating a narrative criticizing “the latest manifestations of a system built for white supremacy.”

Instead, these mainstream writers see no hate crimes in the death of the six Asian Americans in Atlanta. And they take issue to the notion of a rise in hate crimes, one columnist going as far to say that based on the Justice Department’s 2019 Victimization report, Asians are attacked pretty equally by whites (24 percent), fellow Asians (24 percent), Hispanics (7 percent), and African Americans (27.5).

It’s a weird stat to throw around.  Basically, they’re saying everyone hates us, even our own kind. And that’s supposed to make Asian Americans feel comfortable in America?

It’s a weird “divide and conquer” defense by the white mainstream pundits, all in a way to shut us up. Hate? What hate?

The white deniers even trivialize the self-reported data from the Stop AAPI Hate website which numbered nearly 4,000 cases since the first Trump “Kung Flu” utterance that kicked off the whole scapegoating madness.

But perhaps you saw the New York Times response to the challenge of documenting the actually hate Asian Americans are really facing.

Last Friday, the paper on the bottom of the fold on page 1 spelled out the instances it found of Anti-Asian violence. It was in baby blue ink, perhaps to make it seem happy?

The Times went over all reported cases in news reports around the country since March 2020, and only counted the cases that were slam-dunk examples of racial hate.

It came up with just 110 cases of businesses vandalized, people slurred and beaten, including Vilma Kari in New York City. (Link to column?)

110 cases is a far cry from 4,000 from the  #StopAAPIHate website. And while the NY Times  cases on the printed page show a definite trend, a naysayer would diminish the impact of it all and say  110 cases among  23 million Asian Americans, sounds like a small number.

It isn’t. But it does expose the ridiculousness of the hate crime debate. One victim is too many. We’re still left with an entire community scared. And six people dead in Atlanta.

Defensive white conservatives on the op-ed pages really don’t have an answer for any of that. Nor do they say anything about the white racist narrative that is the history of  Asians in America that go back to the 19th Century.

Instead, of empathy on the murders and the violence, or calls for unity and compassion, they cheer on more “divide and conquer” political  strategies like supporting the effort by some  right wing Asian American groups calling for the Justice Department to restore a bogus discrimination case against Yale.

Some Asian Americans want to file a suit similar to the one against Harvard that’s now at the Supreme Court.

I don’t want to predict what the Supreme Court will do in the case where some Asian Americans are being used to sue Harvard over discrimination in admissions.

But the latest Harvard numbers do seem to make a mockery of any such claim. Last week, Harvard announced the racial makeup of its Class of 2025, and it looks like the admissions process was more than fair to Asian Americans.

They were No. 1, at the head of the class. A total of 1,968 applicants were admitted, with Asian Americans making up 27.2 percent of admits.

That’s  diversity at the nation’s top elite college. And it would seem to take the urgency out of the suit before the High Court.

As I’ve always said, who’s discriminating against whom if Asian Americans have reached the highest percentage at Harvard ever. Does an Asian American parent really have a claim if their Johnny or Jane with straight A’s and highest test score doesn’t get in?  And then again, what are the damages if Johnny or Jane end up at some other Ivy League school.

The difference this time is that the white anti-affirmative action types thought they could engineer the perfect plaintiff, an aggrieved minority group. What can be better than some plaintiffs from  the stereotypical “model minority”?

So the same people who brought forth the Fisher/University of Texas case and lost, turned to aggrieved Asian Americans who got rejected at Harvard and recruited them to be the new human shields for this version of the anti-affirmative action crusade.

The case lost in the lower court and has been appealed all the way to SCOTUS.

In the meantime, the admissions process rolls on, and lo and behold:  At 27.2 percent of the class, are Asian Americans really discriminated against?

Or are the plaintiffs saying Harvard should be 40-45 percent Asian American as they are at some campuses of the University of California?

Right now, the new Harvard freshman class is under 40 percent white. If the admissions were blind and Asian American applications rose, that would probably make Harvard’s white admissions drop.

But this is the folly of all the lawsuit against Harvard, and even the recent attempt to bring back a claim of discrimination against Yale.

These are favored activities of white conservative activists who need to stay busy. Fighting affirmative action is their thing. The preservation of systemic white supremacy. They just thought this time they might get further ahead if they used Asian Americans as white proxies to fight their battles.

It’s not working. The latest numbers from Harvard show, the current system doesn’t discriminate against Asians and works a heck of a lot better than people may think.

At more than 5.6 percent of the nation’s population, they are 27.2 percent of Harvard’s next freshman class.

Can you honestly take that discrimination lawsuit seriously?

Emil Guillermo is a journalist and commentator. He writes a column for the Inquirer’s North American bureau. See his vlog at http://www.amok.com