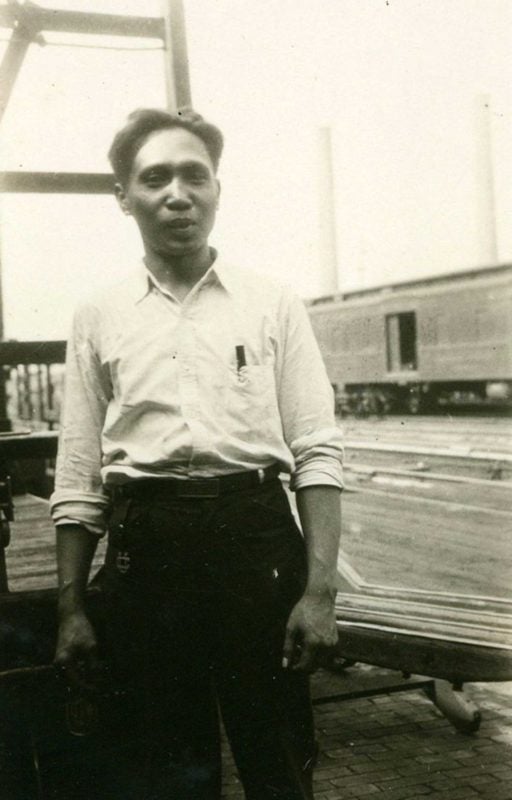 “Filipino boy” Potenciano Taoatao who worked as a head chef of the Princeton Pullman in 1930. (Princeton’s Mudd Manuscript Library Blog)

An unfamiliar episode in U.S.-Philippine history happened between 1920s and 1930s. It was a time when so-called “Filipino boys” worked aboard the Princeton Pullman train as cooks, servers, and did all sorts of menial jobs.

A blog by April Armstrong entitled “The Princeton Pullman’s ‘Filipino Boys’” is published at the Princeton University website under the Mudd Manuscript Library Blog.

The Princeton Pullman is a special railroad car that undertook summer expeditions across North America for Princeton University faculty and students doing research on geological specimens and fossils. The all-male Filipino staff – known as Manongs — manned the kitchen and made the beds. They made quite an impression on the researchers who praised them for doing their tasks diligently.

One of the comments came from Professor Richard W. Field, who writes: “We were especially impressed with the way the Filipino boys worked day and night to make our trip a success, and we all felt that they took as great a pride in the expedition as we did ourselves.” The Filipinos were seen as “silent and efficient.”

Armstrong took note of the circumstances of the Filipinos’ migration to the U.S. during the time before World War II: “…The Philippines were a territory of the United States, and as a result restrictions on Asians entering the country under the Chinese Exclusion Act of 1882 and the Immigration Act of 1917 did not apply to them. They were part of a wave of Filipino migrants known as the ‘Manong generation’ of menial laborers who were usually recruited for temporary work.

“‘Manong’ translates as ‘older brother;’ this generation was mostly made up of young, single men like the Princeton Pullman’s staff. Their time with Princeton’s geologists corresponds to a season of American conflict about their presence in the mainland U.S. A series of deadly anti-Filipino riots fueled by racial prejudice and resentment over the perception that Filipinos were taking jobs from white Americans occurred beginning with the first year of these summer train expeditions (1926), mostly on the West Coast. Attitudes toward Filipino Americans ultimately shifted during World War II.”

The 2018 blog highlights the story of one “Filipino boy” by the name of Potenciano Sylvestre José Mendoza Taoatao, who was the head chef in 1930. He was having difficulty with the English language but he was knowledgeable of the terrain the train traveled. With the information he provided, the researchers uncovered useful fossils including “two saber-toothed tigers in their dig that day.”

“It’s hard to know,” states the blog, “what Taoatao’s role on these expeditions truly was. As a chef, records indicate he prepared any number of meals, including a special Filipino pig roast at the end of the summer of 1933. Yet it seems clear that he took more than a passing interest in the excavation of fossils, and we do know that at least some of the Filipino staff on board the Princeton Pullman were college students themselves. Our records do not tell us what happened to Taoatao or the other Filipino attendants after Princeton retired its train…but we do know that without the Filipino staff who joined Princeton’s students and faculty on their transcontinental adventures, the experience would have been much different for everyone on board.” @TheFilam

Here’s a link to the blog. https://blogs.princeton.edu/mudd/2018/12/the-princeton-pullmans-filipino-students-staff/

MOST READ
usa Flying Saucers: What We Know of UAPs and UFOs
usa Filipino’s mansion selling for $25M, the priciest in Orlando, Florida
usa 8 Reasons Why You Should Subscribe to a Meal Kit Delivery Service
usa Quo vadis, Philippines?
usa West Virginia man pleads guilty to sex with 14-year-old in PH
usa Stranger in Calgary park verbally abuses family chatting in Ilocano
usa Pentagon ‘committed’ to understanding UFO origins
DID YOU KNOW?
How to Dispute a Debt and Win | Simple Tactics
The 12 Best Lat Exercises for Muscle Growth
Countdown to summer: tips for learning how to surf
User Guide: How to Track a Lost iPhone
The Best Filipino Food to Try When Visiting the Philippines
Water Filter Pitcher: The secret to having clean water at home