The unbearable hubris of Rodrigo Duterte

The unbearable hubris of Rodrigo Duterte 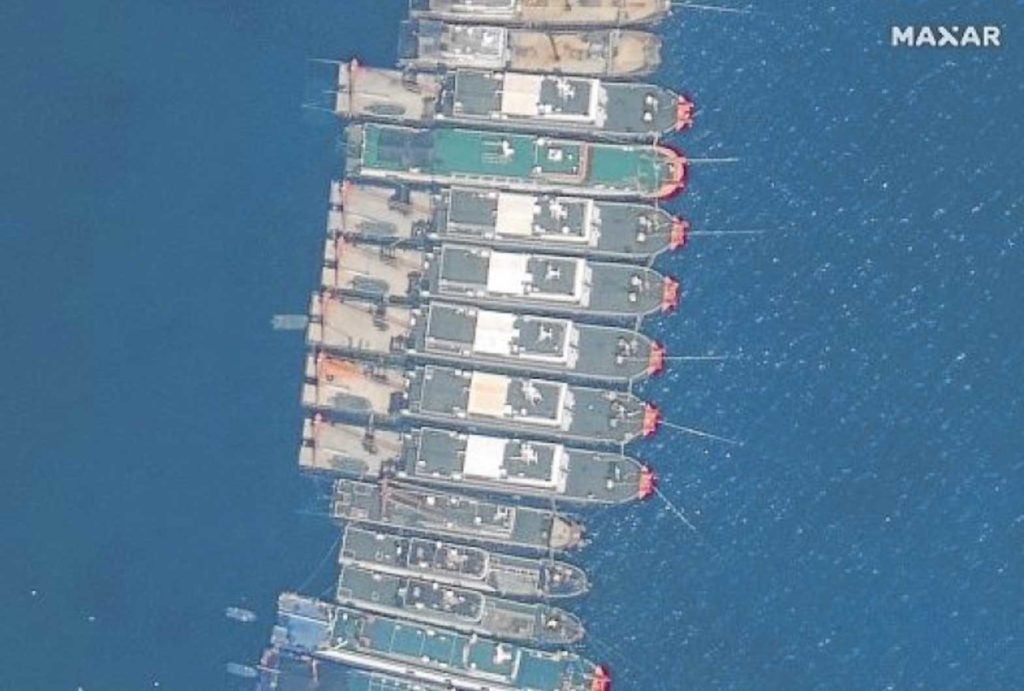 Now numbering close to 200, the Chinese vessels seen gathered at Juan Felipe (Whitsun) Reef have been coming and going since late last year, according to the US-based research company Simularity. AFP

NEW YORK—The presence of approximately 220 Chinese vessels in Philippine territorial waters—supposedly sheltering there because of inclement weather—not only is a blatant violation of Philippine sovereignty, but proof of President Rodrigo Duterte’s completely inept handling of persistent threats from Beijing in its baseless claim to almost all of the South China/West Philippine Sea.

Philippine diplomats and military brass have criticized China for these territorial incursions that could result, according to Salvador Panelo, Duterte’s lawyer, in “unwanted hostilities that both countries would rather not pursue.”

Then again, given Duterte’s reluctance to displease Beijing, and hoping for Chinese investment in the local economy, Beijing’s aggressive tactics come as no surprise. Manila’s current response is simply too little, too late. Until this prickly situation, Duterte had backed away from the Hague’s ruling in July of 2016, based on the UN Convention on the Law of the Sea (UNCLOS), that unequivocally affirmed the country’s sovereign rights to its economic zone, in effect rejecting China’s claims.

This is a man who boasted during his presidential campaign that he would “ask the Navy to bring me to the nearest point in South China Sea that is tolerable to them and I will ride a jet ski‎. I will carry a flag and when I reach Spratlys [islands], I will erect the Filipino flag.” This David-versus-Goliath scenario bolstered his macho image and his appeal to the voters.

In an earlier column I noted that, since becoming president, Duterte “has metamorphosed into a pussycat where China is concerned. Not only will he not be doing what he said he would, on a jet ski or any other vehicle, but he’s turned positively sweet, cloyingly so, towards Beijing and its naked grab for almost all of the South China/West Philippine Sea.”

This abject turn-around comes in the midst of the current pandemic crisis, which his government has so far handled miserably. With 813,000 cases of COVID-19 infections, as of this writing, the Philippines has the highest case load in all of Southeast Asia. These are but two of so many failures in the way he has presided over the republic since he took office in mid 2016.

The president is a man obsessed with one four-letter word: Kill.

He offers it up as a solution to practically everything.  Here are a few choice quotes:

Criticism of his administration is quickly delegitimized, either through the bullet, or manipulating Congress and/or the judicial system to silence critics. His administration shut down ABS-CBN in 2020, the largest media conglomerate in the country, supposedly for franchise violations. He has railed against mayors, lawyers, judges, clerics, any and all who don’t necessarily toe the Duterte line.

He is particularly aggrieved when the critic is a woman. The man simply cannot abide strong, smart, and empathetic women.

He had Senator Leila de Lima jailed on trumped-up charges of drug dealing. She was and continues to be a vociferous critic of his war on drugs, that is really a war on the poor.  She has been imprisoned since 2017.

The Supreme Court , packed with his appointees, ousted its Chief Justice Maria Lourdes Sereno in 2018. She had opposed Duterte’s declaration of martial law in Mindanao, as well as other executive actions.

His Justice Department has filed numerous cases, including for libel and tax fraud, against Maria Ressa, director of Rappler, the independent news agency that has been fearless in its critical reporting on the Duterte administration.

He has often and publicly insulted Vice-President Leni Robredo and excluded her from any meaningful policy-making position within his administration. To her credit, Robredo has done much more in response to the pandemic than Duterte’s anemic response, e.g., having her office, despite a tight budget, run COVID-19 programs, such as free antigen tests in local neighborhoods.

As early as November 2016, he made clear his preference for the strongman-type of rule, by allowing the entombment of dictator Ferdinand Marcos at the National Cemetery for Heroes, akin to, as the well-known political analyst Walden Bello put it, having Al Capone buried at Arlington National Cemetery.

While the Lenten Season has ended—an annual revisiting of the passion and death of Christ, and a reaffirmation of hope and divine redemption with his resurrection—it continues in the archipelago, as it began with Duterte’s ascendancy to the presidency in 2016. It is no exaggeration to say that under his rule, the country has endured more than five years of an interminably long and bloody Via Dolorosa. Herod has nothing on Duterte when it comes to the slaughter of innocents. Copyright L.H. Francia 2021