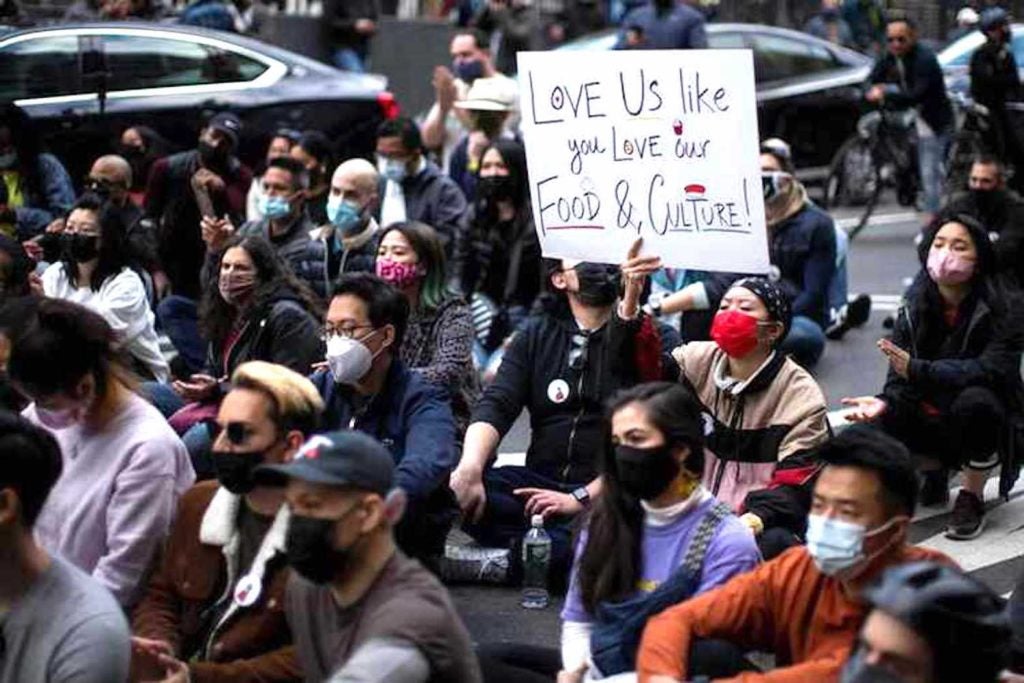 xPeople sit in front of a building where an Asian woman was attacked last week, as protesters attend a Stop Asian Hate rally and march in New York City, U.S., April 4, 2021. REUTERS/Eduardo Munoz

NEW YORK – Asian Americans and community activists rallied against anti-Asian hate crimes on Monday outside a New York courthouse where a man charged with assaulting a 65-year-old Asian woman in a hate crime was due to face his first hearing before a Manhattan Criminal Court judge.

Police have identified Brandon Elliot, 38, as the man seen in a video kicking the woman to the ground and then kicking her head several times on March 29 near Times Square.

“This attack would not have happened if he was not released,” said Phil Wong, president of the Chinese American Citizens Alliance of Greater New York, standing in front of the courthouse, where demonstrators raised signs to “speak up against Asian hate” and to support the police.

The New York Times identified the victim as Vilma Kari, an immigrant from the Philippines, citing a law enforcement source.

Hate crimes reported against Asian Americans increased 149% annually in 2020 in 16 major U.S. cities, according to the Center for the Study of Hate and Extremism at California State University, San Bernardino.

Concern over such crimes was heightened when six Asian women were among eight people shot dead last month at Atlanta-area spas.

In California, Orange County prosecutors on Monday charged a man with hate crimes for throwing rocks at an Asian woman and her 6-year-old son as they drove, cracking their car’s windshield.

“The man later told police Koreans in the area were trying to control him,” the District Attorney’s office said.

A 28-year-old man was charged with felony violation of civil rights and vandalism with a hate crime enhancement, plus a misdemeanor count for throwing the rock, prosecutors said.