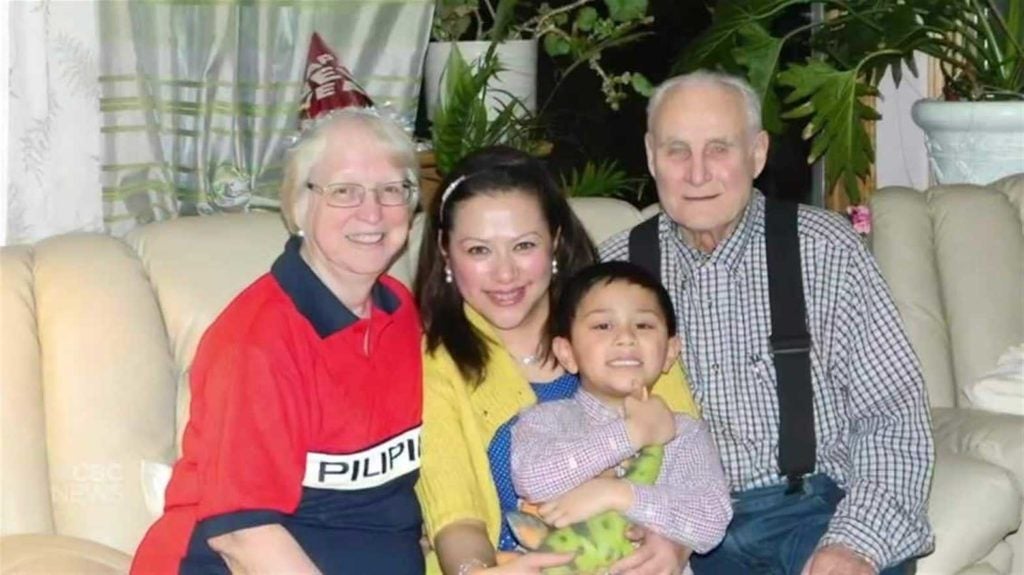 When Dixie Marie Judilla a decade ago found out that she was pregnant and would be a single mother, she felt trapped.

As a temporary foreign worker in the small town of Claresholm in the Canadian prairies, she was not entitled to any benefits, and she wouldn’t be able to afford a nanny.

She tearfully decided that she would bring her baby back to the Philippines for her parents to take care of, and come back to Claresholm to earn money.  But she didn’t have to do that, thanks to an elderly Canadian couple’s extraordinary act of kindness.

Gerd Smith was a regular customer at a Dairy Queen where he often had conversations with Judilla who worked there. When he learned of Judilla’s plan to go back to the Philippines, he and his wife, Elaine decided to help her.

Gerd and Elaine, retired empty nesters, offered to watch Judilla’s baby after he was born, so she could continue working in Canada and save money.

Judilla’s son, Dominic, is turning 10 this year and didn’t have to be parted from his mom, thanks to the Smiths.

“Staying in Claresholm, I met these good people with a good heart, Canadians who helped me … take care of my son for free without even asking for anything in return,” Judilla told CBC News.

After 13 years, she has gained her Canadian permanent residency and now works at an Alberta Health Services long-term care facility. “This is my town. This is my home,” she said.

She is among the more than 15,000 Filipinos who immigrated to small Alberta communities like Claresholm between 2010 and 2016. Federal programs like the Rural and Northern Immigration Pilot are helping fill jobs outside the big cities.

Elaine Schmidt said her husband decided to help Judilla because he was also an immigrant. Gerd was born in Berlin, Germany, and moved to Saskatchewan in 1955, where he worked on a farm. He and Elaine were married in 1968 and moved to Claresholm in the 1970s.

When Gerd  came over he didn’t have a family either. But people helped him, so he wanted to help somebody, too, according to Elaine.

Judilla and the Schmidts became close, with visits, meals and holidays spent together over many years. Through Judilla, the Schmidts forged happy ties with the Filipino community, Elaine said. When Gerd died in 2017, Judilla and Dominic were mentioned in his obituary.

Elaine later moved to another town to be closer to her adult children, but she still stays in touch with the Judillas. Before the pandemic, Judilla would drive from Claresholm to Lethbridge so Elaine could visit with Dominic.

“I always tell him … I’m your Canadian grandma,” Elaine said.