Pandemic Easter: A season of faith, hope, and charity

Pandemic Easter: A season of faith, hope, and charity 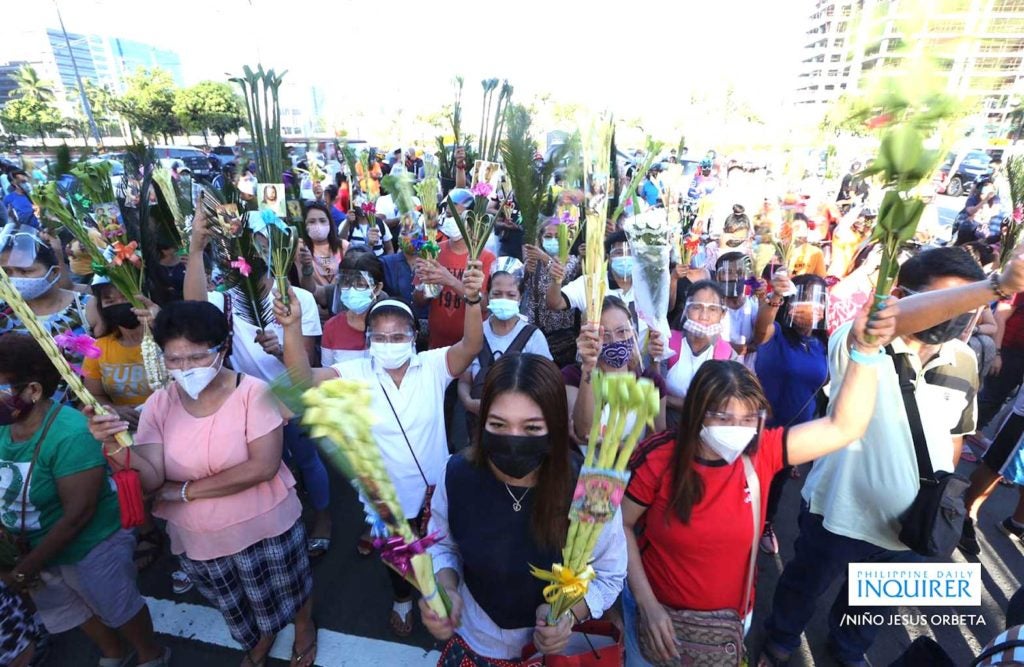 What is the meaning of Easter to millions when their churches are closed, unemployment is climbing, millions are struggling to meet their daily needs (while some leaders are playing politics), and when there’s no Easter egg hunt?

Given the stressful and overwhelming human situation, with coronavirus having a major evil effect in the lives of every Juan and Juana de la Cruz, frankly, what is there to celebrate?

How do we rejoice in the Resurrection, the most solemn of all holy feasts, when we still cower in fear as the pandemic remains a harbinger of worst things to come (more deaths, massive hunger, and depression), if not a bitter taste of a dystopian future?

As it was in 2020, the normally festive early morning Salubong and the communal singing of Hallelujah were muted, just as the siete palabras on Good Friday were put online. Instead, on the same Good Friday, the PH Department of Health recorded 15,310 new COVID-19 cases, the largest single-day increase in the entire Western Pacific area.

With severe cases on the upswing and hospitals reaching full capacity, pessimism put aside, even the heroes among the front-liners have all reached the breaking point and are now feeling burnout. Covid-19 has directly killed almost 3 million global citizens, 13,000 of them in the Philippines!  Candidly, how do we now celebrate Easter when death seems victorious over life?

In a Catholic country that is commemorating the 500th year of Christianity and for believers who are forced to reduce the usual sounds and sights of Easter joy into silent prayer and quiet reflection, what is needed are faith and hope at ground level and a lot of charity with its boots on.

First, will Christian faith be able to remind us of God’s response to Jesus’ cry on the cross, “My God, my God, why have you forsaken me,” which is the same loving response to us who now feel abandoned and forsaken under the shadows of pestilence and death? Yes, and I tell you, God’s response is nothing less than awesome: JESUS is risen on the third day, Hallelujah!

It the kind of “faith that sees,” the oculata fides which makes us believe that we are not in control, but God is. Oh no, it’s not just a vague old story that doesn’t appear to address the real issues, but the Empty Tomb scores the triumph of God’s power over death and serves as an aide-mémoire of the victory of good over evil. Not only that, but it also assures us of the truth that God can write straight with crooked lines because only God could turn the shameful cross of Christ into a perpetual symbol of salvation.

The second is Christian hope. Face to face with a health crisis that leaves a colossal psycho-emotional scar and that pushes the planet into a large-scale socio-political and economic catastrophe or global recession, there are two paths to choose: To despair (alcoholism, violence, or suicide) or to hope – hope in the risen Lord.

I don’t think we will see real hope coming from someone else. The Empty Tomb will make us to see a silver lining behind every dark cloud and a light at the end of the tunnel. Hope is our attempt, always aided by God’s amazing grace, to face bravely all worries and disappointments, trusting that our God is bigger than all human problems.

And the third is Christian charity. Charity means to love God above all things and to love our neighbor as ourselves. During this crisis, we witness a genuine demonstration of charity and self-sacrifice as practiced by front liners, who do their best for others, irrespective of the economic status or creed of the people they serve. Charity will make us do the same, which is to give without counting the cost and without expecting anything in return. Charity will push us to reach out to the lost, the last, and the least, and make this world a bit better.

Remember, the first Easter marked the genesis of a whole new world, a new beginning of hope, visible in a radically new community and changed attitudes. It was a joyful moment in human history when Christian faith and charity spread rapidly, very much like Covid-19 but with the opposite effect: No one was sad or hungry, and all were healed, both spiritually and physically.

Before I end, allow me to greet you a very Happy Easter!