Jurors see videos taken before and after Floyd's deadly arrest

Jurors see videos taken before and after Floyd’s deadly arrest

Minutes before his death last May, George Floyd looked happy and energetic while waiting to buy cigarettes at a Minneapolis store.

A little later, he was lying handcuffed in the street with his neck pinned to the ground by a white policeman’s knee, as seen in video evidence presented on Wednesday in the trial of Derek Chauvin, the former officer charged with the murder of the 46-year-old Black man. 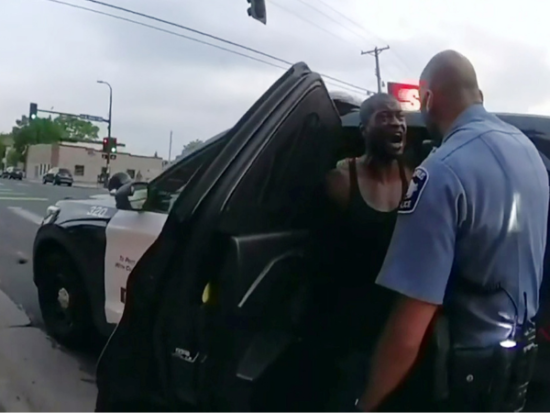 George Floyd speaks with a police officer during his arrest and before he was placed on the ground on May 25, 2020 in a police body camera video played in court on the third day of the trial of former Minneapolis police officer Derek Chauvin for second-degree murder, third-degree murder and second-degree manslaughter in the death of George Floyd in Minneapolis, Minnesota, U.S. March 31, 2021 in a still image from video. Pool via REUTERS

After it was over, Chauvin could be heard coolly telling a horrified bystander why he felt the need to kneel on Floyd’s neck for more than nine minutes.

“I had to control this guy because he’s a sizeable guy,” Chauvin said. “It looks like he’s probably on something.”

In the third day of testimony in the Chauvin trial, prosecutors presented jurors with several pieces of video evidence detailing the minutes before and after Floyd’s death. Chauvin is charged with murder and manslaughter in a case that triggered a wave of protests against racial injustice around the world last summer.

The videos shown to the jury addressed some of the central issues in one of the most closely watched U.S. police misconduct trials in decades. Did Chauvin use excessive force on Floyd? Was the officer distracted by an angry crowd of onlookers? Was Floyd’s death caused by Chauvin’s actions or was it the result of a drug overdose? 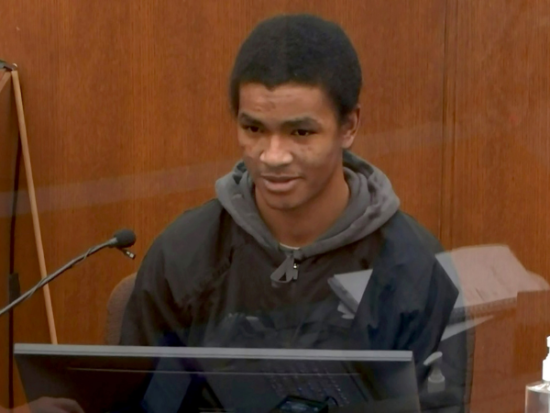 Cup Foods store employee Christopher Martin speaks as a witness on the third day of the trial of former Minneapolis police officer Derek Chauvin for second-degree murder, third-degree murder and second-degree manslaughter in the death of George Floyd in Minneapolis, Minnesota, U.S. March 31, 2021 in a still image from video. Pool via REUTERS

A $20 bill, apparently counterfeit, brought the two men together. Christopher Martin, a 19-year-old cashier at Cup Foods who testified on Wednesday, said Floyd used the bill to pay for cigarettes. During his testimony, Martin said he felt moments of guilt since then, wondering if he could have changed how that day unfolded.

“I thought if I would not have taken the bill, this would have been avoided,” he said.

Martin was one of several eyewitnesses who have told the jury of their horror watching Floyd struggle for breath under Chauvin’s knee outside the store. Chauvin’s defense argues that the 19-year veteran of the force was following his training.

Prosecutors from the Minnesota attorney general’s office are also building their case through an array of videos that form a collage of the events of May 25, 2020.

One soundless clip captured by a Cup Foods security camera showed Floyd dressed in a black tank top approaching a cashier with a banana in hand, making cheerful conversation and putting his arm around a woman.

Floyd appears to be filled with energy and constantly in motion, at one point almost dancing in the aisle, shifting his weight from one foot to the other.

Martin, the cashier, told the jury that they chatted about sports but Floyd was slow to find his words, and Martin concluded Floyd was under the influence of drugs. 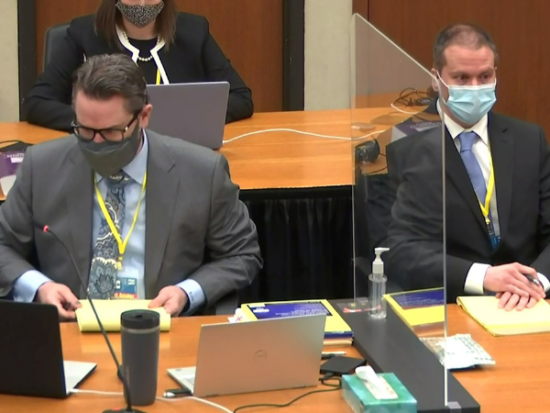 Former Minneapolis police officer Derek Chauvin, accompanied by his defense attorney Eric Nelson, attends the third day of his trial for second-degree murder, third-degree murder and second-degree manslaughter in the death of George Floyd in Minneapolis, Minnesota, U.S. March 31, 2021 in a still image from video. Pool via REUTERS

“He seemed very friendly, approachable, he was talkative, he seemed to be having an average Memorial Day, just living his life,” Martin recalled, noting the arrest took place on a holiday. “But he did seem high.”

Prosecutors say Floyd’s use of opioid painkillers and the fentanyl found in his blood at autopsy is irrelevant. Martin was asked if Floyd seemed upright and alert. Martin said that he did.

Martin said Floyd’s $20 note struck him as an obvious forgery, but he thought that Floyd “didn’t really know it was a fake bill.” He considered just letting the store deduct it from his wages, but then decided to tell his manager, who eventually told another worker to call the police. Officers soon confronted Floyd at gunpoint in a car outside.

Charles McMillian, 61, was one of first to notice Floyd’s arrest, and one of the last people to ever speak with him.

Shown video of himself standing near Floyd, who was pinned by Chauvin’s knee and calling out for his recently deceased mother, McMillian dropped his head into his hands in tears.

The video shows McMillian imploring Floyd to cooperate with the officers and get in the police car.

“I can’t,” Floyd replies in an agonized voice.

After Floyd’s limp body was loaded into an ambulance, Chauvin got into a police car, and McMillian walked over to confront the officer.

“I don’t respect what you did,” McMillian can be heard on the video telling Chauvin through the window.

The day ended with the jury watching videos of Floyd’s arrest and death repeatedly for more than an hour, each captured from a slightly different angle by the body-cameras worn by the responding officers.

(Reporting by Jonathan Allen; Writing and Editing by Frank McGurty and Paul Thomasch; editing by Alistair Bell and Grant McCool)