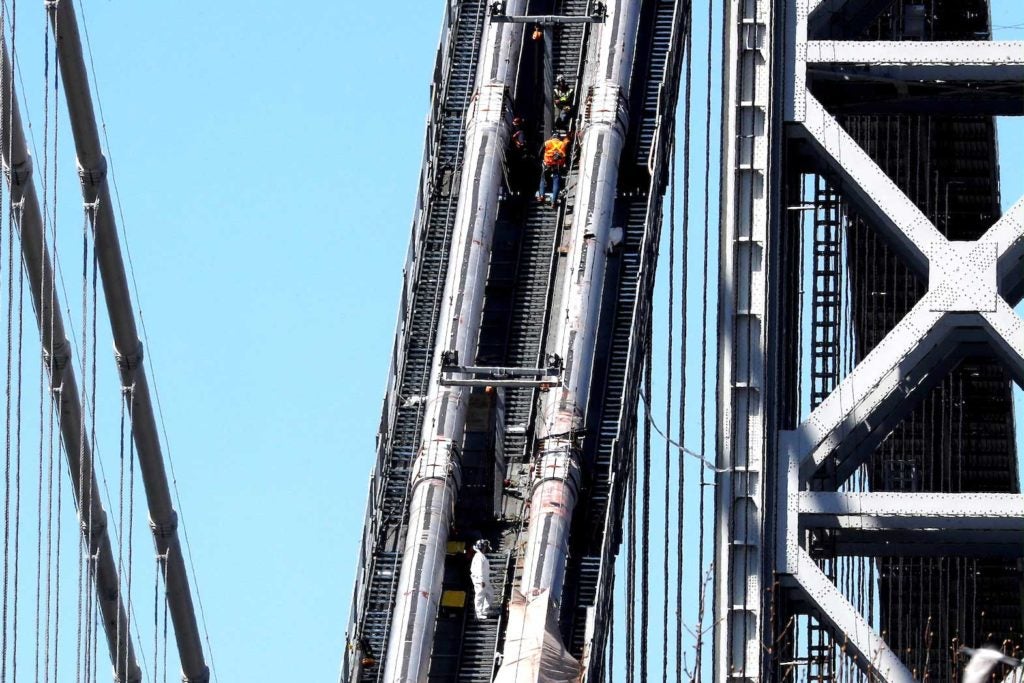 Construction workers are pictured on the northeast cables of the George Washington Bridge, which is undergoing a multi-year reconstruction in New York City, New York, U.S., March 30, 2021. REUTERS/Mike Segar

President Joe Biden on Wednesday will call for a dramatic and more permanent shift in the direction of the U.S. economy with a roughly $2 trillion package to invest in traditional projects like roads and bridges alongside tackling climate change and boosting human services like elder care.

He also aims to put corporate America on the hook for the tab, which is expected to grow to a combined $4 trillion once he rolls out the second part of his economic plan in April.

Coupled with his recently enacted $1.9 trillion coronavirus relief package, Biden’s infrastructure initiative would give the federal government a bigger role in the U.S. economy than it has had in generations, accounting for 20% or more of annual output.

The effort, to be announced on Wednesday at an event in Pittsburgh, sets the stage for the next partisan clash in Congress where members largely agree that capital investments are needed but are divided on the total size and inclusion of programs traditionally seen as social services. Just how to pay for them will be a fractious issue in its own right.

Biden for now is ignoring a campaign promise and sparing wealthy Americans from any tax increase. The plan would increase the corporate tax rate to 28% from 21% and change the tax code to close loopholes that allow companies to move profits overseas, according to a senior administration official.

It does not include expected increases in the top marginal tax rate or to the capital gains tax. The plan would spread the cost for projects over an eight-year period and aims to pay for it all over 15 years, the senior administration official said.

The plan also includes $621 billion to rebuild the nation’s infrastructure, such as roads, bridges, highways and ports, including a historic $174 billion investment in the electric vehicle market that sets a goal of a nationwide charging network by 2030.

Congress will also be asked to put $400 billion toward expanding access to affordable home or community-based care for aging Americans and people with disabilities.

There is $213 billion provided to build and retrofit affordable and sustainable homes along with hundreds of billions to support U.S. manufacturing, bolster the nation’s electric grid, enact nationwide high-speed broadband and revamp the nation’s water systems to ensure clean drinking water.

Biden is moving forward with the massive job and infrastructure effort as he navigates an ambitious time line to provide enough COVID vaccines for all adults by the end of May and the deployment of pandemic relief.

The White House is also dealing with a rise in the number of migrants at the southern border, the fallout from back-to-back mass shootings and a looming showdown over the Senate filibuster

The second package is expected to include an expansion in health insurance coverage, an extension of the expanded child tax benefit, and paid family and medical leave, among other efforts aimed at families, the officials said.

White House officials have not explained whether they will seek to have both efforts pass at the same time or try to get Congress to approve one first.

The jockeying around Biden’s push has already begun, as allies push for inclusion of their priorities in the upcoming legislative effort and Republicans signal early concerns about the size and scope of the package.

Moderate Democrats have said the package should be more targeted to traditional infrastructure projects to attract Republican votes, seeking a return to bipartisan policymaking.

Liberal lawmakers want to use the party’s slim majorities in Congress to tackle some of the nation’s biggest problems, such as climate change and economic inequality, with resources that reflect the size of those challenges.

Representative Pramila Jayapal, a leading progressive Democrat, said on Tuesday that outside groups like Americans for Tax Fairness pegged the infrastructure and jobs plan that Biden rolled out on the campaign trail at between $6.5 trillion and $11 trillion over 10 years.

“We’d like to see a plan that goes big,” Jayapal said. “We really think that there’s ample room to get the overall number up to somewhere in that range in order to really tackle the scale of investments that we need to make.”

Republican Garret Graves, his party’s senior member on the House Select Committee on the climate crisis, said he was keeping an open mind but was concerned that Democrats were leveraging the popularity of infrastructure to usher in a broad expansion of social welfare.

“If they’re just going to encapsulate a cow pie in a candy shell, then I’m not there,” Graves said in an interview on Tuesday.