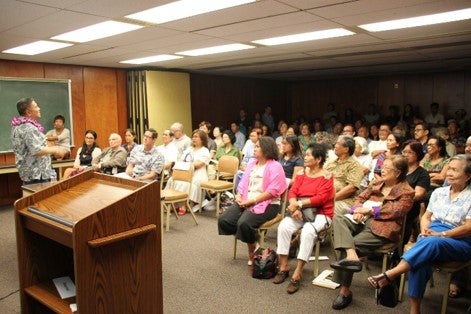 Prof. Ocampo at the East-West Center giving his final lecture on the “Marcos Diaries.” DFA PHOTO

The professor and INQUIRER columnist visited Oahu from August 26 to September 1 in celebration of Philippine National Heroes’ Day, which is held every August 30th.

Ocampo’s weeklong visit to Hawaii was supported by the National Commission for Culture and the Arts (NCCA) and organized by the Philippine Consulate General in Honolulu in partnership with the Filipino Association of University Women (FAUW) University the University of Hawaii (UH) Center for Philippine Studies, UH Leeward Community College School of Pacific and Asian Studies, East-West Center, the Knights of Rizal and Philippine Airlines.

The full-house lectures were as follows:

“Mukhang Pera: The Politics of Banknotes in the Philippines,” on August 29  at the Philippine Consulate General in Honolulu, showed how politics influences how history is depicted in the banknotes of the Philippines.

“Rizal in Dapitan: The Triumph of Life Over Death,” was held on August 31 at the UH-Leeward Community College.

This year marks the 125th anniversary of Rizal’s arrival in Dapitan, his place of exile from 1892-1896. Ocampo demythologized the national hero by offering fascinating insights, lively anecdotes and little-known facts about the hero as a human, particularly how he lived in exile for four years in Dapitan.

“Interrogating Presidential Papers: The Ferdinand Marcos Diaries,” September 1 at the East-West Center tapped on the handwritten diaries that span the years 1969-1984. The papers were left behind when Ferdinand Marcos and his family fled from the presidential palace in February 1986.

Ocampo is preparing the diaries for publication, collating from different manuscript sources, and annotating from newspapers and the Official Gazette, in the process being critical of Marcos’ view of events.

Ocampo’s lectures in Hawaii brought together scholars and society figures, members of the academe, the culturati, Marcos loyalists, former university activists and walk-in folks, young and old alike, with some even attending all of his three lectures.