Suspect in Colorado shooting rampage due in court

Suspect in Colorado shooting rampage due in court

A 21-year-old man accused of opening fire at a Colorado supermarket, killing 10 people, was due in court on Thursday to be formally advised of the charges against him.

Ahmad Al Aliwi Alissa faces 10 counts of murder and an attempted murder charge stemming from the shooting rampage on Monday at King Soopers grocery store in Boulder, some 28 miles (45 km) northwest of Denver. People lay flowers on the police car of officer Eric Talley who died Monday responding to a call where a gunman opened fire on people in a King Soopers grocery store in Boulder, Colorado, U.S. March 24, 2021. REUTERS/Kevin Mohatt

The bloodshed at King Soopers marked the nation’s second mass shooting in less than a week. A gunman shot eight people dead at three Atlanta-area day spas on March 16.

The two attacks have reignited a national debate over gun rights and prompted U.S. President Joe Biden to call for new legislation from Congress. A bill intended to impose stricter background checks and ban certain semi-automatic rifles has stalled amid Republican opposition. Geoffrey Nicosia plays the bagpipes at a makeshift memorial where people lay flowers on the police car of officer Eric Talley who died Monday responding to a call where a gunman opened fire on people in a King Soopers grocery store in Boulder, Colorado, U.S. March 24, 2021. REUTERS/Kevin Mohatt

Police have not yet publicly identified a motive for the Boulder killings. Alissa’s 34-year-old brother described him as antisocial and paranoid in an interview with the Daily Beast.

The suspect’s sister-in-law told police on Monday evening that he had been “playing with” a firearm she described as resembling a “machine gun” two days earlier, upsetting family members, according to an arrest affidavit filed by police in the case.

Alissa, a naturalized U.S. citizen from Syria who graduated from Arvada West High School in 2018, pleaded guilty to third-degree assault for punching a classmate in late 2017. 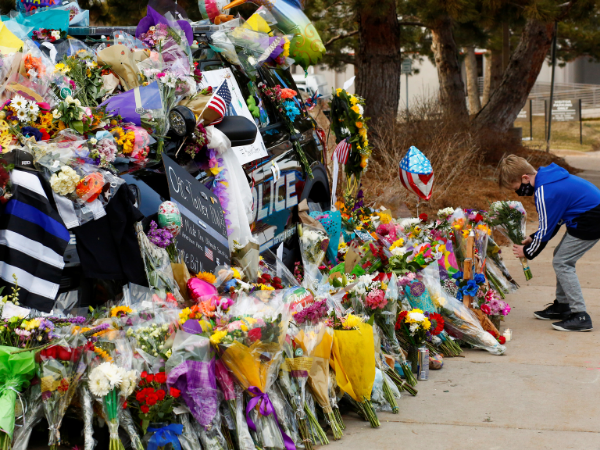 A child lays flowers near the police car of officer Eric Talley who died Monday responding to a call where a gunman opened fire on people in a King Soopers grocery store in Boulder, Colorado, U.S. March 24, 2021. REUTERS/Kevin Mohatt

The classmate said the attack was unprovoked, an account supported by interviews with several witnesses, according to an Arvada Police Department incident report at the time. Alissa told an officer the classmate had called him a “terrorist” and racist names.

Alissa was sentenced to probation and community service.

The shooting victims included Eric Talley, an 11-year veteran of the Boulder police force who was among the first officers on the scene. Talley, 51, was a father of seven who had been looking for less dangerous work, according to his father.

Witnesses told police the assailant killed one man in his vehicle and then gunned down another in the parking lot. The shooter stood over him, firing multiple times, before entering the store to continue the rampage.

When apprehended, Alissa did not answer questions but asked to speak with his mother, according to the affidavit.

Makeshift memorials of flowers, votive candles and condolence messages were left this week outside the supermarket and at police headquarters.

Colorado has seen some of the most shocking episodes of gun violence in U.S. history, including the 2012 mass shooting at a movie theater in Aurora and the 1999 rampage at Columbine High School, near Littleton.