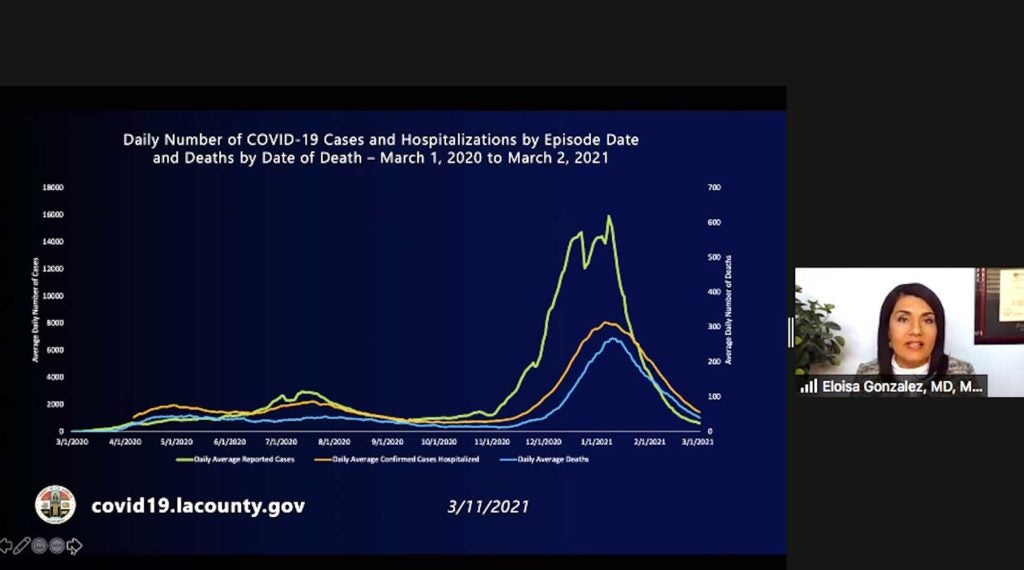 LOS ANGELES – It was about a year ago when schools began shifting from in-person to remote learning due to the COVID-19 pandemic.

“No one ever would have expected that the school closures would have lasted this long,” Los Angeles County Office of Education Superintendent Debra Duardo said Thursday during a virtual media briefing.

But as COVID-19 cases and deaths continue to decline in Los Angeles County, various establishments and institutions – including schools – have become eligible for re-opening their doors.

“It’s the trauma our students have experienced, the isolation that has really had an impact on them,” Duardo said. “And we should all be concerned by the pandemic’s impact on the future workforce.”

In February, Bargar sent California Gov. Gavin Newsom a letter urging the immediate reopening of all classrooms in the county.

She noted that successful returns to the classroom have been well documented across the globe and are supported by the Center for Disease Control, which has identified five strategies for safely reopening: wearing masks, physical distancing, washing hands, cleaning facilities, and improving ventilation in classrooms and school buildings.

“I’ve also spoken with many parents who have expressed frustration with the distance learning and are eager for their children to return to campus,” she said during Thursday’s briefing. “I’m hearing from many school aged children who are enthusiastic leave looking forward to going back to school to see their friends and their teachers.”

Nathan Kuo, a senior at Arcadia High School, said the impact of the pandemic on students spans far and wide. He said that he and 34 members of the L.A. County Superintendent Student Advisory Council – which Duardo founded – have endured technological difficulties, video call fatigue and a lack of motivation.

The council drafted a letter to the Biden administration on how the pandemic has expanded educational inequalities in many ways, from mental health concerns to gaps in access to the Internet and technology.

“Overall, I have no qualms that students across the county, whether their virtual learning experiences have been pleasant or difficult, yearn for a safe return to normalcy,” Kuo said. “If there’s one thing many of us have learned during this time. It’s been how much we rely on one another, and how much we really value our daily personal interaction.”

Dr. Eloisa Gonzales, director of cardiovascular and school health at the Los Angeles County Department of Public Health, said the County’s daily average cases has dropped to 700 – the lowest since April of last year. It has also seen a steady decline in daily deaths, with that number at an average of 40 as of March 2. Gonzales noted, however, that daily deaths averaged 14 in early November.

“So while our numbers are moving in promising directions, hospitalizations and deaths are still high,” she said. “And this reminds us how much suffering continues to happen during the aftermath of a surge in cases.”

Individuals between the ages of 16 and 64 who are deemed to be high risk became eligible for the vaccine in the county on Monday.

Gonzales noted that L.A. County residents’ willingness to get vaccinated has increased, with the largest change among Latino and Black residents. Still, vaccine hesitancy remains more pronounced among those communities.

“We understand that there is hesitancy to be vaccinated. And there are a number of very good reasons for this hesitancy, from the newness of the vaccine to a long and troubling history of mistreatment of Black and brown people by the medical establishment,” she said.

Gonzales said that to address this, the county continues to partner with community leaders, community- based and faith organizations not only to increase vaccine access, but also to ensure accurate information is being conveyed to community members by a trusted source.