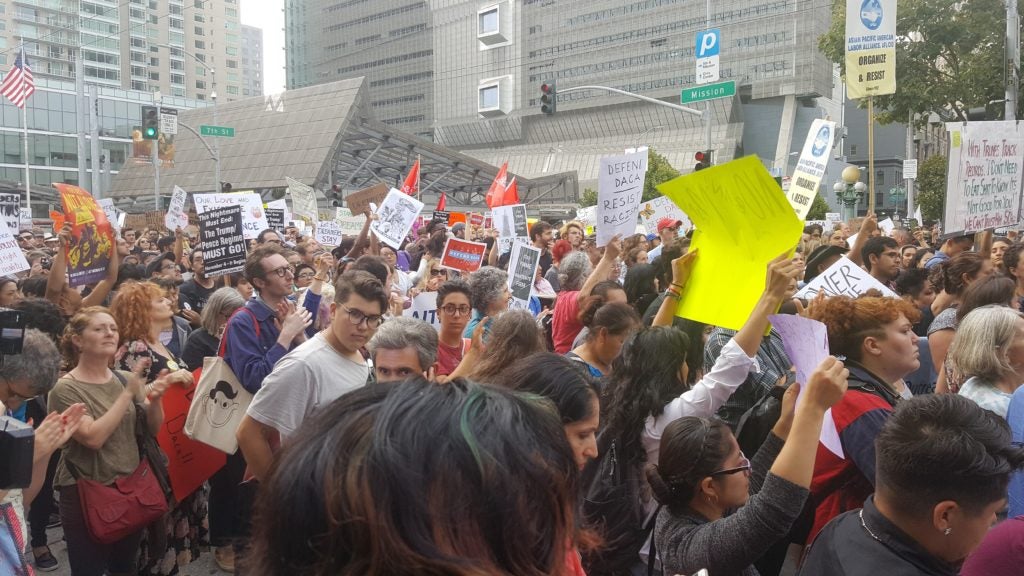 Thousands of San Franciscans, including Filipinos, take to the streets to denounce Trump’s termination of DACA. INQUIRER/Jun Nucum

SAN FRANCISCO — Close to a hundred Filipinos from various organizations joined the thousands of San Franciscans who staged a protest rally Tuesday afternoon, September 5, in front of the Federal Building in San Francisco against President Donald Trump’s termination of the Deferred Action on Childhood Arrivals (DACA), an initiative of former President Barack Obama to give temporary relief from deportation of an estimated 2 million undocumented youths who were brought to the U.S. by their parents.

Composed mainly of young Filipinos who came from groups such as Migrante, Gabriela, SOMCAN, and PACE the participants expressed their solidarity with with undocumented immigrants from the Filipino and other ethnic communities.

Leaders of Filipino organizations expressed outrage, sadness, or disappointment while others had their fears revived with the prospect of being separated from their families if no relief law is passed by Congress within six months and deportation proceedings start.

Aurora Victoria Herrera David, secretary general of National Alliance for Filipino Concerns (NAFCON), “As part of the continuing attacks of President Trump including his anti-immigrant and racist rhetoric, this move is to be expected and is not a surprise but still is disappointing, very outrageous that his administration is doing this to immigrants.” Upon hearing the White House’s formal announcement, David felt afraid for the youth who had been temporarily protected by DACA. “They are now again at a precarious condition of their lives. All the 800,000 recipients of DACA and their families will all be affected,” David said.

David said the six-month grace period is just to make it appear that it was done with compassion. She also stated that a more comprehensive immigration reform is need to protect all undocumented immigrants.

Raymond Jegillos of League of Filipino Students in San Francisco State University, echoed her: “We are also here to push the administration for real immigration policy that does not include deportation of millions which is not for the people and will only serve to hurt and terrorize immigrant communities.” Raymond Jegillos of LFS San Francisco State University contend that it is not right for 800,000 undocumented youths and children to have to face the results of the rescinding of DACA. INQUIRER/Jun Nucum

“As a result of the DACA decision, you immediately strike terror and fear among undocumented youth who feel they become more targeted and more vulnerable. People become unsure of their safety within their own country.”

Jegillos, however, thinks that by giving Congress six months to come up with a solution the administration somehow shows it’s willing to reconsider DACA.

Still, he believes that it has become absolutely necessary for people to continue resisting and show indignation. He also thinks that chances are bleak that Congress will pass a law to benefit DACA recipients.

Gabriela USA Secretary General Pixie Castillo reiterated her group’s support for undocumented youths and families “because to rescind DACA is to put the families in danger of deportation as well as really taking away their dignity in trying to have them be able to get jobs and education.” Castillo believes what is really needed now is “for people to actually get out to the street to show support and defend DACA. We want to get everyone to come out and join organizations to really meet people and show support by going to rallies like this.”

A frustrated, worried and concerned Daly City Councilmember Ray Buenaventura felt that by coming to the rally, he was showing support for the hundreds of thousands of people who are going to be affected by Trump’s decision.

“This is just devastating for hundreds of thousands of kids who came here who have a tremendous amount of hope and now it seems the dreams have been shattered. We won’t just put up with that. We are here to support them and let them know that we care and we will push to hopefully get them to stay,” Buenaventura exclaimed. Daly City Councilmember Ray Buenaventura joined rally to show he supports the fight to the efforts to keep the DACA program. INQUIRER/Jun Nucum

“I hope that this will serve as the mobilizing point for all for Filipinos to support your fellow Fil-Ams and other groups because we can join forces together, make a difference and change the world,” Buenaventura emphasized.

Based on a study by University of California San Diego Professor Tom Wong, 97 percent of DACA recipients are currently employed or enrolled in school, and that 72 percent of the top 25 Fortune 500 companies employ DACA recipients.

DACA recipients also contributed tan estimated $460 billion to the US economy over the ten years of the DACA program.