Short-sellers made billions from US tech selloff with Gamestop jump

Short-sellers made billions from US tech selloff with Gamestop jump

Investors are estimated to have made billions of dollars from their bearish bets on Tesla and big tech stocks in the recent knee-jerk selloff triggered by a jump in U.S. Treasury yields, data from financial analytics firm Ortex showed on Tuesday.

Tesla was short-sellers’ biggest win, giving them estimated profits of $4.2 billion so far in 2021, followed by more than $1 billion gains each on Zoom Video and Apple, according to Ortex.

They were however burnt by betting against videogame maker Gamestop. The company, which was at the heart of the so-called “stonks” retail trading mania, has jumped another 400% in the past two weeks as amateur investors have jumped back in.

GameStop’s e-commerce strategy plans were seen driving this week’s renewed gains in January’s “meme” stocks, alongside speculation that small investors will use their upcoming stimulus checks to trade.

In other major bets, investors made about $1 billion from shorting QQQ, an ETF that tracks the performance of the Nasdaq 100. The tech-heavy benchmark hit correction territory on Monday, slipping more than 10% from record highs.

GameStop up for fifth day as meme stocks recover 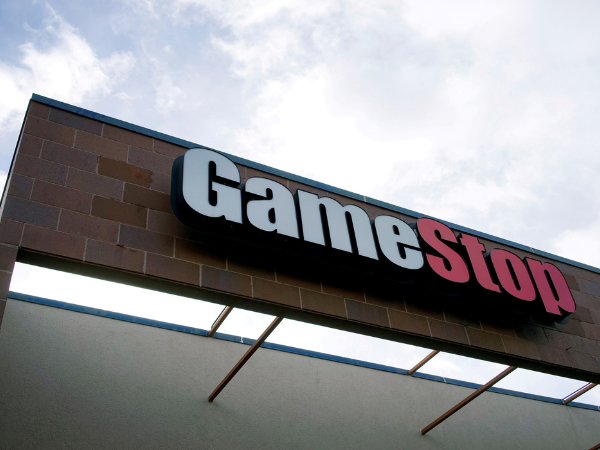 The GameStop store sign is seen at its shop in Westminster, Colorado January 14, 2014. REUTERS/Rick Wilking

Shares of GameStop jumped for the fifth day running on Tuesday, as news on the video retailer’s e-commerce strategy and speculation that small investors will pour stimulus checks into markets showed signs of reheating January’s “meme” stocks boom.

GameStop shares were up 15.1% to $223.70 premarket, a day after the company tasked Chewy co-founder Ryan Cohen — a major GameStop shareholder and board member — with spearheading the company’s online sales efforts.

The latest rally follows wild gyrations in the share price since January, when it was at the heart of a social media-driven surge in a number of stocks that squeezed some hedge fund investors.

Shares in the company are still far below January peaks of more than $480 a share but the recovery may reduce losses for more of the investors who lost money on the stock’s subsequent collapse.

In Frankfurt, GameStop was trading about 24% higher and were the second-most traded stock on trading platform Lang & Swartz after Siemens AG.

As of its last close, investors in GameStop’s U.S.-listed stock have seen the value of their holdings surge more than 10 times compared to the start of the year.

(Reporting by Aaron Saldanha in Bengaluru and Danilo Masoni in Milan; editing by Patrick Graham)