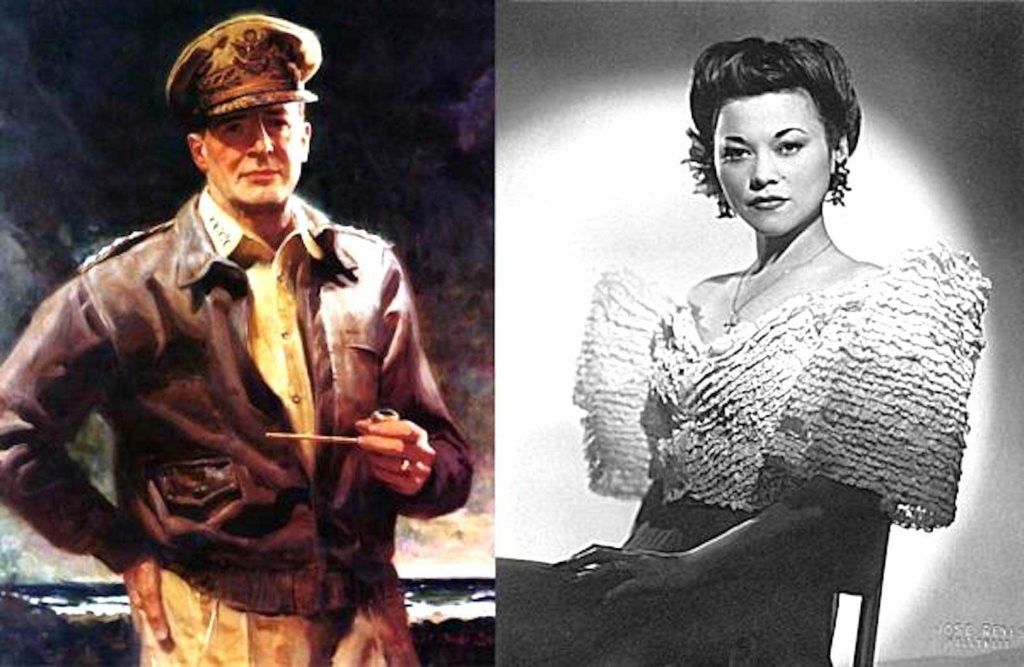 Gen. Douglas MacArthur and Isabel Rosario Cooper in their heyday.

Before today, to hear the name General Douglas MacArthur evoked just the typical pap of legend.

You know, he came. He left. He returned.

MacArthur landed in Leyte and became the conquering hero.  That’s the official memory. But there is little if anything  in his story, authorized or unauthorized, about the Filipina.

Until now, courtesy of Prof. Vernadette Vicuna Gonzalez, a professor of American Studies at the University of Hawaii at Manoa.

She has authored “Empire’s Mistress, starring Isabel Rosario Cooper,” a new book titled like a movie befitting a Filipina worthy of top-billing,  a onetime Manila based vaudevillian and screen actress, who in MacArthur’s life was definitely a “Filipin-a” and not a “Filipinx.”

Known as “Elizabeth Cooper,” “Belle Cooper,” or simply “Chabing,” her Filipina nickname (we all  have one), Cooper was a woman of her time, defined by men and rendered a footnote. She struggled mightily to be more–a modern woman who could defy a tragic story line and control her own destiny.  But the world wasn’t quite ready for her power. And to put it nicely, she succumbed to being a male appendage, which is how Cooper got to know her general in the first place.

Gonzalez’s book is part- excavation, part-celebration of Cooper, that puts the story of MacArthur and his mistress into a new context, and not necessarily in a sordid way. Gonzalez is mindful at all times that Cooper was a daughter of colonization. That is why you read this book, to see another small-scale, personal perspective of the U.S. Philippines relationship where colonial mentality is more than a massive headache.

Isabel Cooper is born in 1912, according to her birth certificate, the daughter of a white American mid-westerner from Wisconsin, Isaac Cooper, who came to the Philippines to fight in the Spanish American war in 1898, and stayed on for the Philippine-American war.  In many ways, dad is like the statue at Arlington National Cemetery and around the country known as “The Hiker,” the American colonizing foot soldier sent to conquer the Philippines. Isaac Cooper likes the Philippines enough to make his life there and be the beneficiary of the war’s new modern colonial life.

Isaac Cooper is 33 when he meets a 14-year-old named Protacia Rubin around 1908.  An interracial family in the Philippines when it was banned in America but not in the Philippines? Was this love one-way or two-way? Who was using whom? Gonzalez approaches the marriage as  different from other American-Filipino relations where Filipinas were the “vulnerable supplicants.” Rubin is seen as molding the “raw materials of colonization” to fit her needs. In fact, Gonzales says Rubin treated her marriage to a white guy the way the white guy would treat a Filipina.

That would make Protacia Rubin more like the real modern woman hero of this family saga,  if it weren’t for their daughter Isabel,  one of three children by the couple, and the mestiza beauty who has a relationship with MacArthur.

Gonzalez pieces together Cooper’s life like a humanistic puzzle, starting with the author’s own first encounter reading a Ninotchka Rosca fictional character who resembles Cooper. But then like a detective, Gonzalez finds documents of Cooper’s real life, her birth and death certificates, the playbills marketing the young vaudevillian. Cooper goes  by the moniker “Dimples,” and in the shows to G.I.s young and old, sang naughty songs like “Pussy, Pussy, Pussy, Has anyone seen my cat?”

This is where Mac Arthur comes in, after graduation from West Point, as a young lieutenant, and all before World War II. MacArthur is married and assigned to the Philippines, goes back to the U.S., and comes back again in 1929.

And that’s when the Cooper colonial relationship begins, according to Gonzalez. “She’s in her late teens,” Gonzalez told me in an interview. “And he’s close to 50.”

Sounds like her mom’s relationship, but MacArthur is much older. Like the current HBO documentary  “Allen vs. Farrow,” the older man/much younger woman theme is present, which means it’s more about power than sex.  And in the Filipino context, power is all colonial.

And love? Gonzalez says there is no love there.

But there is MacArthur’s emotions, in love letters that were kept by Cooper and now in MacArthur’s archive.

“I think that personally, she meant a lot to him,” Gonzalez told me. Though the archived  letters cannot be re-produced and are protected by copyright, Gonzalez said they say a lot. “We get a sense of how passionately he did feel about her, and how badly it affected him when the relationship ended, so that both the anxiety that comes across in the letters is all one-sided because we don’t see her letters written back by her.”

In fact, we don’t know if she did. But his letters show her power.

When MacArthur is asked to serve as Chief of Staff, he asks Cooper to come with him. She gives up her Philippine movie career and moves to Washington, DC, where MacArthur sets up a love nest at 16th and R streets at the Chastleton Hotel.

“It’s really close to his office,” Gonzalez said. “But he lives with his mom officially. He is deathly afraid of his mother, and he doesn’t really want his mother to find out, but everybody else kind of knows, it’s an open secret, in DC that he’s got a lover.”

MacArthur isn’t married at the time. But again it’s before WWII, and Filipino/white marriages are still verboten in many states in the nation. It would be a great scandal to marry a Filipina. His father was the general of the Philippine-U.S. war. “It would never do, to marry this woman,” Gonzalez said.

The affair is over after five years. MacArthur marries another woman, who is white. Cooper reinvents herself as Chabing and returns to the Philippines. Then returns to Hollywood trying to leverage her MacArthur affair.

She turns to the media and national radio host Drew Pearson, who uses Chabing to help avoid a charge of libel by MacArthur. Pearson reciprocates and helps Chabing by providing introductions.

But it’s still not easy making it in Hollywood.

In the movies, Cooper’s key highlights are still based on the Philippine cinema, where she was the first to kiss a man on screen in “Ang Tatlong Hambog,” (1926). In Hollywood, as “Chabing,” she  appeared in a number of Charlie Chan films as a Chinese woman, before she got a larger role in 1951 “I Was An American Spy.”

For all her movies in Hollywood, she probably had less than ten minutes of screen time, Gonzalez said.

Do you think Susan Roces or Sharon Cuneta or every Filipino star who made it in Daly City or Carson City but not Hollywood can relate?

It is hard to crossover in the arts and culture internationally.  But for Chabing, her movie roles were nothing like her crossover role as MacArthur’s mistress.

The book details Chabing’s sad ending, but she goes down fighting to the end, when it appears she makes the ultimate decision.

To her credit, Gonzalez always shows Chabing not as a victim but as a survivor. And in piecing this story together, she brings Chabing to life.

If you want to understand how the beginning of our colonial history, the personal tale of Chabing and her attempt to overcome it all should become a seminal story for us all.

And though it was not the intention of the publisher, Duke University Press, is there a better woman to celebrate this month of March, Women’s Month, than Isabel Rosario Cooper, a/k/a Chabing, the woman whose circumstances embody those of our historical Filipinas, the colonized nation herself?

Emil Guillermo is a journalist and commentator. He writes a column for the Inquirer.net’s North American Bureau. See his vlog at www.amok.com and on Facebook at Emil Guillermo Media.