The COVID-19 pandemic has reshaped the global travel landscape, and U.S. no-frills airline carriers are pouncing.

“Ultra-low-cost carriers want to attack head-to-head; they believe they’re in a better position to rebuild travel demand,” he said.

Las Vegas-based Allegiant has told prospective pilots whose hiring was halted as the pandemic unfolded: “We have recalled all of our furloughed pilots and are now planning for exciting growth opportunities.”

Spirit and Frontier have posted pilot job ads. They are taking delivery of Airbus A320neo jets that could open longer routes, including coast-to-coast flying traditionally controlled by legacy, or full-service, carriers.

By contrast, American Airlines has gone from hiring 100 pilots a month before the pandemic to threatening 1,850 furloughs without fresh government assistance on labor costs.

Allegiant also stands to benefit if Congress approves the third round of COVID-19 payroll relief for U.S. airlines but “would be just fine without it,” Chief Financial Officer Greg Anderson told Reuters.

“The leading indicators suggest that there is a nice growth trajectory for Allegiant,” said Anderson, citing Google searches, indices that track changes in city populations, and infection and vaccination trends from the Institute for Health Metrics and Evaluation. 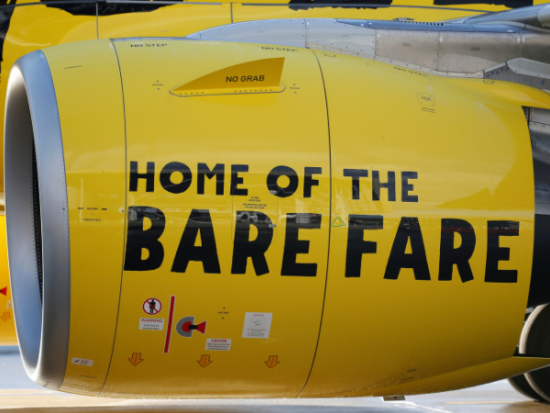 A slogan of low cost carrier Spirit Airlines is pictured on an engine in Colomiers near Toulouse, France, November 6, 2018. REUTERS/Regis Duvignau/File Photo

Ultra-low-cost carriers, or ULCCs, offer a no-frills experience at rock-bottom fares and charge heavily for extras like bags. They wage fare wars and are pervasive in Europe’s fragmented market but have lagged in the United States.

ULCCs are a tier below carriers like Southwest Airlines, which pioneered the low-cost concept in the 1970s and has grown to become the leading domestic airline. It provides free beverages and checked bags but keeps costs low in part by flying a single fleet-type of Boeing 737s.

U.S. mainline legacy carriers American, Delta Air Lines, and United Airlines have diverse fleets that include expensive wide-body jets geared for the kind of business and international travel that has suffered most in the pandemic.

According to data compiled by financial services firm Raymond James, American’s unit costs excluding fuel, a key metric of efficiency, were $0.18 per available mile in 2020, more than double that of budget rivals like Allegiant.

This means Allegiant, which primarily uses second-hand planes and only flies on peak travel days like weekends, can more easily profit on discount fares.

And whereas legacy carriers use a hub-and-spoke network that shuttles people through costly big-city airports, the ULCC business model is based on point-to-point travel to smaller airports where they outsource much of their infrastructure.

Allegiant’s fixed costs account for just around a quarter of its total.

That flexibility helps budget carriers open new routes on a trial-and-error basis. During the pandemic, for example, they have pivoted toward beach and mountain destinations.

“Then if the route is not performing, they won’t hesitate to shut it down,” said George Dimitroff of consultants Ascend by Cerium.

But there are risks.

American, United, and Delta have also shifted flights during the pandemic to pick up leisure demand, and their market power and geographical reach remain formidable.

Competing with them can lure upstart airlines into relaxing cost discipline – a move described as a “path to hell” by budget airlines entrepreneur Bill Franke, who championed the ULCC model.

Together, the three large airlines control 60% of domestic travel and chase away rivals on smaller routes if they choose, industry critics said.

But they are more burdened by debt than the ULCCs and continue to burn through millions of dollars every day, hampering their ability to grow, the critics said.

Beyond low fares, experts said the pandemic had given budget carriers a fresh argument for previously wary customers.

Traditional airline perks like catering services have lost their luster in an era of masks, and budget airplanes feature the same hospital-grade aircraft filtration systems as others.

And they could benefit from more cost-conscious small and medium-sized businesses changing travel policies to favor lower-cost airlines, albeit constrained by their more limited flying through large hubs.

“More price-sensitive travel will be the new normal for the next couple of years at least,” Armas Maes said.

Even so, today’s outsiders will face a competitive cycle.

After the last downturn, low-cost carrier JetBlue Airways grabbed market share from Americans on the U.S. east coast. Now it is grappling with competition from ULCCs and is teaming up with its old rival.