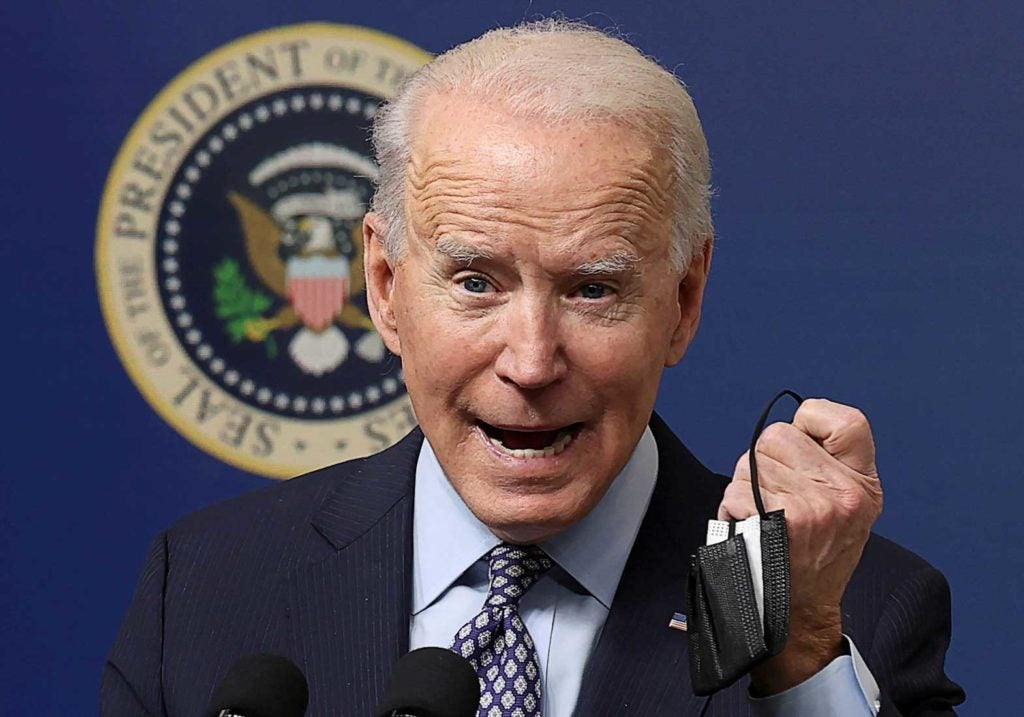 U.S. President Joe Biden displays his face mask as he speaks during an event to commemorate the 50 millionth coronavirus disease (COVID-19) vaccination in the South Court Auditorium at the White House in Washington, U.S., February 25, 2021. REUTERS/Jonathan Ernst

The administration has heavily promoted the “American Rescue Plan” as crucial to getting millions of unemployed back to work and children back into schools. The House of Representatives will vote on it as soon as Friday.

But Republican leaders in Congress are seeking to unify their caucus in opposition to the plan, and even moderate Republicans who signaled initial willingness to work with Biden are balking, largely citing the program’s cost.

While the relief package can pass without Republican support because of narrow Democratic control of the Senate, Biden promised a return to bipartisanship when he entered office in January. His failure to get Republicans on board here suggests four years of bitter battles in Washington instead.

The president has “used every opportunity he has to make the case publicly” for the relief bill, White House press secretary Jen Psaki told reporters Thursday.

She cited polls that show 70% of people, including a majority of Republicans, are in favor of the measure. “He is hopeful that Republicans, many in Congress, will follow what their constituents want,” she said.

“Joe Biden doesn’t think about bipartisanship based on a vote count in Congress. He thinks about it based on how people in the country feel,” Bennett said.

A CAMPAIGN TO SELL AID

But most of the money addresses the economy with $1,400 relief checks to individuals, more generous federal unemployment benefits, aid to small businesses and $350 billion for state and local governments.

Biden last week toured a factory of vaccine maker Pfizer in Michigan and spoke at a town hall in Wisconsin on the aid plan, two states he narrowly won in November.

The White House has pushed the bill on Spanish language media outlets like Telemundo and Univision, met with over 300 American Indian tribal leaders and held a special virtual briefing for 20 African-American news outlets.

REPUBLICAN DONORS, MAYORS ON BOARD

This campaign has gained traction, winning over many people, even some big Republican donors, state officials and voters.

Nearly seven in 10 Americans in a Quinnipiac University poll this month said they support Biden’s plan. And nearly eight in 10 people including a majority of Republicans like the $1,400 relief checks for individuals, the poll found.

More than 100 CEOs in a letter Wednesday called on Congress to “act swiftly and on a bipartisan basis to authorize a stimulus and relief package along the lines of the Biden-Harris administration’s proposed American Rescue Plan.”

Their ranks included Stephen A. Schwarzman, the CEO of asset management firm Blackstone and a major donor to Trump and congressional Republicans in 2020.

Over 30 Republican mayors have signed on to a letter supporting the bill as well.

Meanwhile, Republican leaders in Congress have focused on rallying their caucus against the package as a foundation for unity after Trump’s incitement of a violent attack on Congress in January exposed gaping divisions.

Republicans in late January offered an alternative $600 billion COVID-19 relief package that was immediately rejected by the White House as insufficient.

While the White House faces more fights in the months ahead, veteran Democratic strategists believe the situation is a long-term win for the party.

“The GOP is putting itself at odds with a rescue package supported overwhelmingly by the American people” he wrote.