From the United States to Germany and Australia, government borrowing costs on Friday were set to end February with their biggest monthly rises in years as expectations for a post-pandemic ignition of inflation gained a life of their own.

The move, which began in the U.S. Treasury market at the start of the year on prospects for a huge fiscal boost and economic recovery, has spread globally. 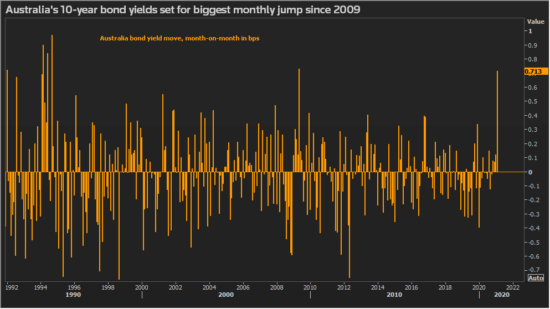 And as three-year bond yields moved above their 0.1% target, the Reserve Bank of Australia on Friday made an unscheduled offer to buy A$3 billion ($2.35 billion) of three-year bonds, on top of a similar amount on Thursday to calm markets.

“Given how expensive bonds have been, meaning yields have been depressed, it was expected that when the selloff came, it would move at great speed,” said Seema Shah, chief strategist at Principal Global Investors.

“This is a move driven by the U.S., and that has fed out to other markets, but large elements of the selloff in recent days are not just about the improvement in growth fundamentals but technical factors, too.” 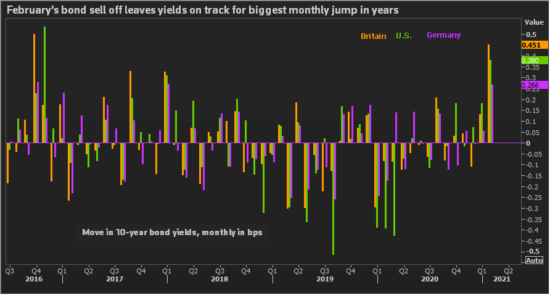 For the United States and some European markets, the bond selloff was on the scale of late 2016, when Donald Trump’s election as U.S. President last triggered so-called reflation bets.

Britain’s 10-year bond yield, up 45 bps in February, was also set for its biggest monthly jump since 2016. Thirty-year yields headed for their biggest monthly leap since 2009 after rising 48 bps.

Rising government bond yields pose a challenge for central banks trying to steer economies through the COVID-19 crisis. They feed through to the real economy by raising the rates at which banks lend, and consumers borrow, thereby tightening financial conditions.

Japan, which targets long-dated bond yields at around 0%, has seen 10-year yields rise almost 10 bps this month to 0.15%. That puts it on track for the biggest monthly gain since March 2020, the peak of the COVID-19-induced market turmoil.

In the euro area, where German Bund yields were set for their biggest monthly jump in three years, the European Central Bank has said it is monitoring the rise in rates closely.

“Seen from a fundamental angle, the ultra-low yields of 2020 made much less sense than the less depressed yields to which markets are heading now,” said Berenberg chief economist Holger Schmieding.

Schmieding said 10-year U.S. yields were likely to rise to 2% by the end of the year as investors’ price in strong growth and a rebound in underlying inflation. German Bund yields could reach 0%, “with risks tilted to the upside.” 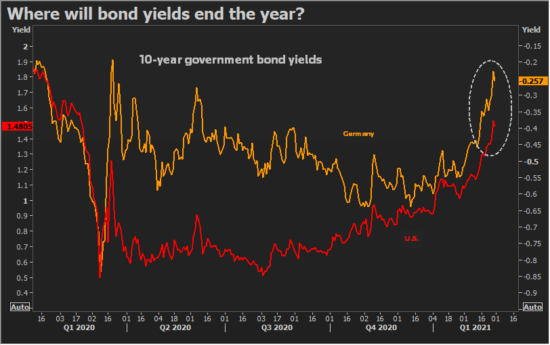