US House about to approve Biden's COVID-19 aid plan

US House about to approve Biden’s COVID-19 aid plan

The U.S. House of Representatives aims to pass President Joe Biden’s $1.9 trillion coronavirus aid bill on Friday in what would be his first big legislative win, although marred by the news that a favored hike minimum wage hike would have to be tossed out.

A spirited and potentially long debate was expected, as most Republicans oppose the bill’s cost that would pay for vaccines and other medical supplies to battle a COVID-19 pandemic that has killed more than 500,000 Americans and thrown millions out of work.

The measure would also send a new round of emergency financial aid to households, small businesses, and state and local governments.

A group of Senate Republicans had offered Biden a slimmed-down alternative, but the White House and some economists insist a big package is needed.

Biden has focused his first weeks in the office on tackling the greatest public health crisis in a century, which has upended most American life aspects.

Democrats control the House by a 221-211 margin. Nancy Pelosi is counting on nearly all of her rank and file to get the bill passed before sending it to a 50-50 Senate where Democratic Vice President Kamala Harris holds the tie-breaking vote.

The House and COVID-19 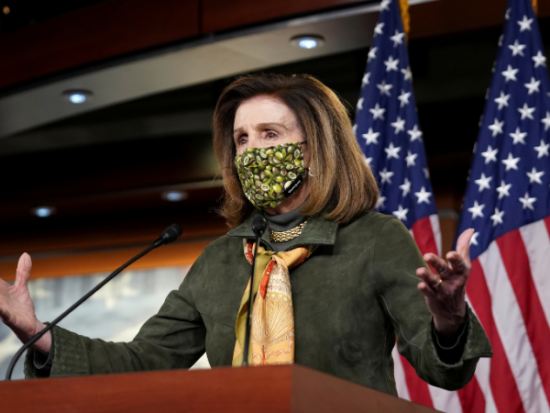 U.S. Speaker of the House Nancy Pelosi speaks during her weekly press conference at the U.S. Capitol in Washington, U.S., on February 18, 2021. REUTERS/Kevin Lamarque/File Photo

Embedded in the House bill is a federal minimum wage increase, which would be the first since 2009 and would gradually bump it up to $15 an hour in 2025 from the current $7.25 rate.

But the future of the wage hike was dealt a serious blow on Thursday when the Senate parliamentarian ruled that it could not be allowed in the Senate version of the coronavirus bill under that chamber’s “reconciliation” rules.

The special rules allow the legislation to advance in the Senate with a simple majority of the 100 senators instead of the 60 needed for most legislation.

Biden has not given up on raising the minimum wage to $15, a top White House economic adviser said on Friday.

A higher wage “is the right thing to do,” White House National Economic Council Director Brian Deese said in an interview on MSNBC. “We’re going to consult with our congressional allies, congressional leaders today to talk about a path forward, about how we can make progress urgently on what is an urgent issue.” Meanwhile, lawmakers must also act on the coronavirus stimulus package, Deese said.

The $15 minimum wage figure had already faced opposition in the Senate from most Republicans and at least two Democrats, which would have been enough to sink the plan. An array of senators are talking about a smaller increase, in the range of $10 to $12 per hour.

In a statement after the Senate parliamentarian’s ruling, Pelosi said: “House Democrats believe that the minimum wage hike is necessary.” She said it would stay in the House version of the coronavirus bill.

‘What This Country Needs’

In arguing for the relief bill’s passage, Pelosi cited opinion polls indicating the support of a significant majority of Americans who the yearlong pandemic has battered.

“It’s about putting vaccinations in the arm, money in the pocket, children in the schools, workers in their jobs,” Pelosi told reporters on Thursday, adding: “It’s what this country needs.”

Among the bill’s big-ticket items are $1,400 direct payments to individuals, a $400-per-week federal unemployment benefit through Aug. 29, and help for those having difficulties paying their rent and home mortgages during the pandemic.

An array of business interests also have weighed in behind Biden’s “America Rescue Plan” Act, as the bill is called.

Republicans have criticized the legislation as a “liberal wish-list giveaway” that fails to dedicate enough money to reopening schools that have been partially operating with “virtual” learning during the pandemic.

House Minority Leader Kevin McCarthy complained it was “too costly, too corrupt.” While Republicans for months have blocked a new round of aid to state and local governments, McCarthy said he was open to his home state of California getting some of the bill’s $350 billion in funding, despite a one-time $15 billion budget surplus.

Efforts to craft a bipartisan coronavirus aid bill fizzled early on. Shortly after, Biden was sworn in as president on Jan. 20, following a series of bipartisan bills enacted in 2020 totaled around $4 trillion.