GameStop Corp shares shot higher Thursday after doubling in the previous session, triggering a series NYSE trading halts and leading a surprise resurgence of so-called “stonks,” as passionate retail investors have dubbed their favorites on various online forums. GameStop shares hit $160 at the open before being halted after several minutes of trading and fell to around $129 before the second halt. The stock resumed trading around 10 a.m. Eastern and hovered around $143 in late morning trade, up 56%. 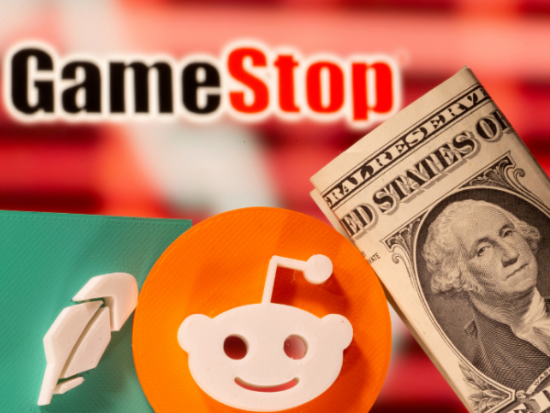 A 3d printed Robinhood and Reddit logos are seen near one dollar banknotes in front of displayed GameStop logo in this illustration taken February 8, 2021. REUTERS/Dado Ruvic/Illustration/File Photo

The rally lifted other “stonks” popular on sites such as Reddit’s WallStreetBets, with AMC Entertainment Holdings Inc up 12.5% and headphone company Koss Corp up nearly 61%.

Analysts were puzzled by the new rally. Some ruled out a short squeeze like the one in January that battered some hedge funds that bet against GameStop and were forced to cover their short positions when individual investors using Robinhood and other trading apps pushed the video game retailer’s shares as high as $483.

Still, short-sellers are estimated to have lost $818 million on Wednesday from bearish bets on Gamestop, data from financial analytics firm Ortex showed.

“The power of the “three R’s” (Robinhood, Retail, Reddit) are back in play,” said Neil Campling, head of technology research at Mirabaud Securities.

“Short interest, though still significant, is now starting out from a different base than last time when it was more than 100%,” said Ankit Gheedia, Head of Equity and Derivative Strategy, Europe for BNP Paribas.

Some said the rally may be partly fueled by a fear of betting against GameStop.

“There are not a lot of people who are just sitting there, ‘oh yeah, let’s for fun, let’s just short GameStop and get my head ripped off.’ The investors learn.,” said Dennis Dick, a trader at Bright Trading, on the Benzinga podcast.

Such a move would be “obvious and easy to justify (GameStop) stock price,” Citron said in a tweet, which sent Esports stock up about 27%. 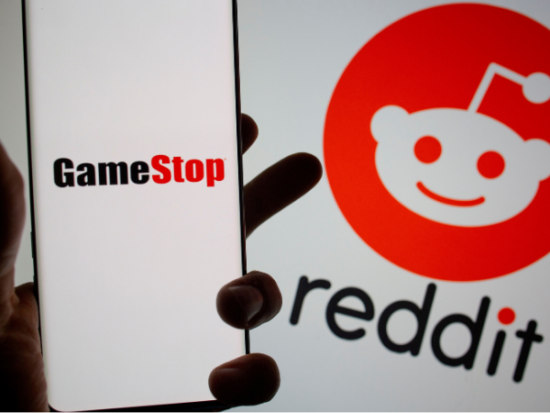 GameStop logo is seen in front of displayed Reddit logo in this illustration taken on Febr. 2, 2021. REUTERS/Dado Ruvic/Illustration//File Photo

Nearly 59 million shares of GameStop had changed hands by mid-morning, nearing its 30-day average volume of 62 million, but still well below the more than 190 million shares that traded hands daily in late January

GameStop was the fourth most traded stock by Fidelity’s customers on Wednesday, with buy orders outnumbering sell orders nearly 2-to-1, as per the broker’s data.

Gill testified to Congress last week that he remains bullish on GameStop, with his words “I like the stock” gaining popularity, being quoted by hundreds of his online followers and featuring on financial-themed meme pages online.

Reddit discussion threads were buzzing again about GameStop on Thursday, with members exhorting others to pile in as the rally gathers steam.

GameStop shares skyrocketed by more than 1600% in January as retail investors, urged on by WallStreetBets, bought the stock as a way to punish hedge funds that had taken an outsized short bet against it.

The risky trading strategies employed by some traders on Reddit have drawn the ire of investing legends such as Charlie Munger, long time business partner of Warren Buffett.

“It’s really stupid to have a culture which encourages as much gambling in stocks by people who have the mindset of racetrack bettors,” said Munger, Berkshire Hathaway’s vice chairman.

Online brokerage Robinhood said in a tweet that the NYSE action would impact all brokerages, but that it had not paused trading on the shares.