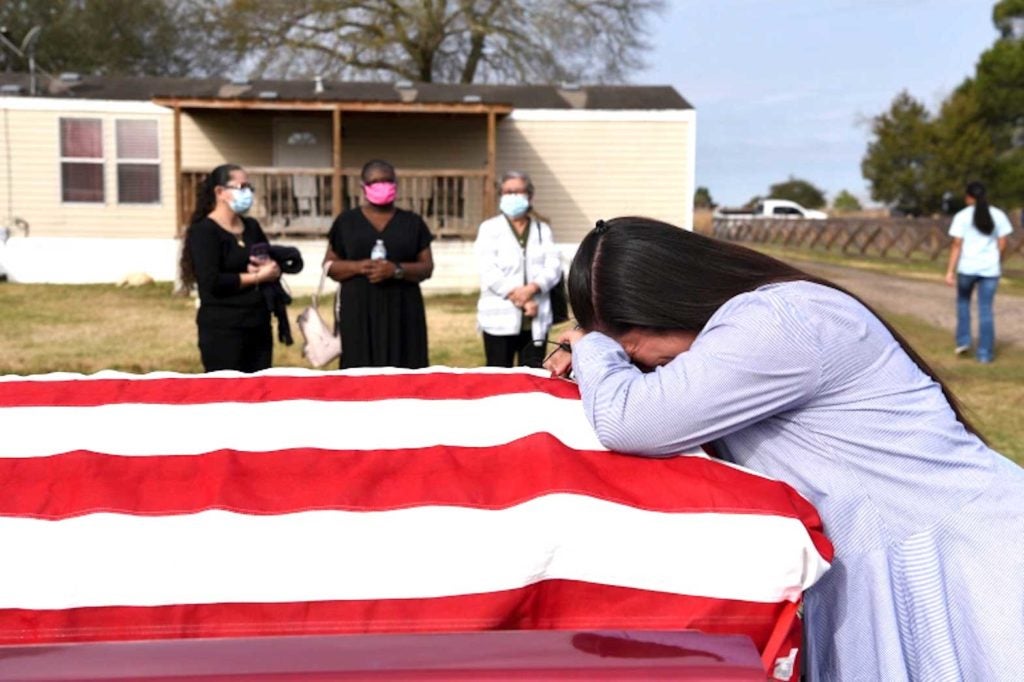 Lila Blanks reacts next to the coffin of her husband, Gregory Blanks, 50, who died from complications from COVID-19, before his funeral in San Felipe, Texas, on January 26 [File: Callaghan O’Hare/Reuters]

It’s been a year now since we all had a choice to follow or ignore science; to create a real plan to mitigate the virus or a plan to do next to nothing. And now, I think it’s fair to say, we can look back and assess the damage done by the previous president, No. 45.

Does anyone dispute he did more to hurt this country than any president in modern history? His actions killed the American spirit and American people, 500,000 of them.

His leadership as commander-in-chief led us to 500,000 dead and counting. His stubborn ignorance has brought us to this sad statistic:  More deaths than from the combined death tolls of World War I, World War II, and the Vietnam War.

And yet even with all those deaths on Trump’s resume, I saw some little girls ape their parents as I took a walk the other day. On a sidewalk nearby, the girls used chalk to draw  an American flag, with the saying, “God Bless America, Trump 2024.”

Maybe they haven’t had any friends or relatives die from Covid. Or maybe they’re just young and brainwashed. QAnon Juniors?

But I knew some people who died of Covid. And I bet you did too. Nurses, non-nurses. Filipino. Non-Filipino. On the CNN tribute I saw the picture of John Eric Swing, 48.  Young guy. The executive director of the Fil-Am non-profit SIPA in Los Angeles.  I knew some of his family.

Recently, I wrote of my friend Corky Lee, the Asian American photographer. My last memory of him is burned into my head.  He’s in a bed, on his back, intubated, slipping deeper into Covid’s grip. And all I could do is stay muted on Zoom in prayer.

I had close blood relatives die over the last year.  My cousin Ted. My Ate Esther. It wasn’t Covid. But any death during Covid is to me a Covid death, where grieving is near impossible when you can’t say your proper goodbyes.

And yet, my families death don’t count in the official tally of 500,000 Covid deaths.

But I count them, and I blame it all on Trump. He was the commander-in-chief in this Covid war. He failed us all. In fact, I’ve never seen Trump mourn or grieve for any of the Covid dead.

But I saw President Joe Biden. His message on Monday was heartfelt and real.

Biden said this: “To those who’ve lost love ones, this is what I know. They’re never truly gone. They’ll always be a part of your heart. I know this as well. This seems unbelievable. But I promise you. The day will come. The memory of the loved one you lost will bring a smile to your lips before a tear to your eye. It will come, I promise you. My prayer for you though is that they will come sooner than later. That’s when you know you’re going to be okay. You’re going to be okay. For me, the way through sorrow and grief is to find purpose. I don’t know how many have lost someone a while ago wonder, is he or she proud of me now. Is that what they want me to do. I know how I feel. We can find purpose. Purpose worthy of the lives they lived, or the country we love. So today, I ask all Americans to remember. Remember those we lost. Those who are left behind…I also asked us to remain vigilant, to stay socially distanced, to mask up, get vaccinated when it’s your turn. We must end the politics and misinformation that has divided families, communities in the country, and has cost too many lives already.”

Biden’s kind of personal rhetoric is something you rarely heard from Trump, whose tank was empty when it came to empathy. He was no consoler-in-chief.

No, from Trump we got references to “China Virus” and the “Kung Flu.” No sympathy, just phrases that turned every Asian American into a Covid scapegoat.

That’s certainly the reason why after a year, there have been nearly 3,000 reports of anti-Asian American hate in this country as reported to the website,  StopAAPIHate.

While the term “Disaggregate!” is a rallying cry to distinguish Asian American numbers by ethnicity, we all know what happens when it comes to hate crimes.

No one distinguishes between Chinese or Japanese, Korean or Filipino.  We’re all Asian. And they’re coming for us.

The violence has come to a head especially in the last few weeks. On social media, I saw a Filipino American friend post about her elderly mother who was attacked. In New York last week, a 61-year-old Filipino was slashed in the face in the subway.

In January, an 84-year-old Thai man, Vicha Ratanapakdee from the Bay Area  was knocked down and later died from the attack. Days later, another attack in Oakland saw a 91-year-old man shoved to the ground.  Both these two instances were caught on surveillance cameras and appear to be random acts of violence. Suspects have been arrested.

Assemblyman Rob Bonta (D-Alameda), the first Filipino American in the California legislature, who also wants to be attorney general, joined other legislators Monday condemning the violence. Bonta called it a “full on hate-fueled state of emergency. A state of crisis.”

“We’re saying enough is enough,” Bonta said in Sacramento. “We’re sick and tired, sick of being targeted and attacked and tired of being devalued and mistreated. For many of us, this is personal.”

Let’s see what kind of laws get put together to make it tough on the perps or helps out victims. And let’s see if the momentum lasts.

Rallies have occurred around the country the last two weekends, from the Bay Area to New York City.

And it could be an historical moment, when a new generation finds the reason we need the term, Asian American Pacific Islander.

Especially when hate is the subject. That’s when  we need our broad coalition of Asian American allies to come together.

There’s four million Filipinos. But there’s nearly 25 million of us together. This is when you need the umbrella of protection.

Like the Golden State Warriors said when they were champs: There’s “strength in numbers.”

When Donald Trump scapegoats Chinese for the coronavirus, his followers don’t disaggregate hate.

They come for all of us. You Filipino? Close enough. That’s why we stand together against hate.

But masked and distanced against the virus. We shall not forget our Covid  500,000.

Emil Guillermo is a journalist and commentator. He writes a column for the Inquirer’s North American bureau. Listen to his podcasts  on your favorite podcast app. Or watch is vlog/blog at www.amok.com