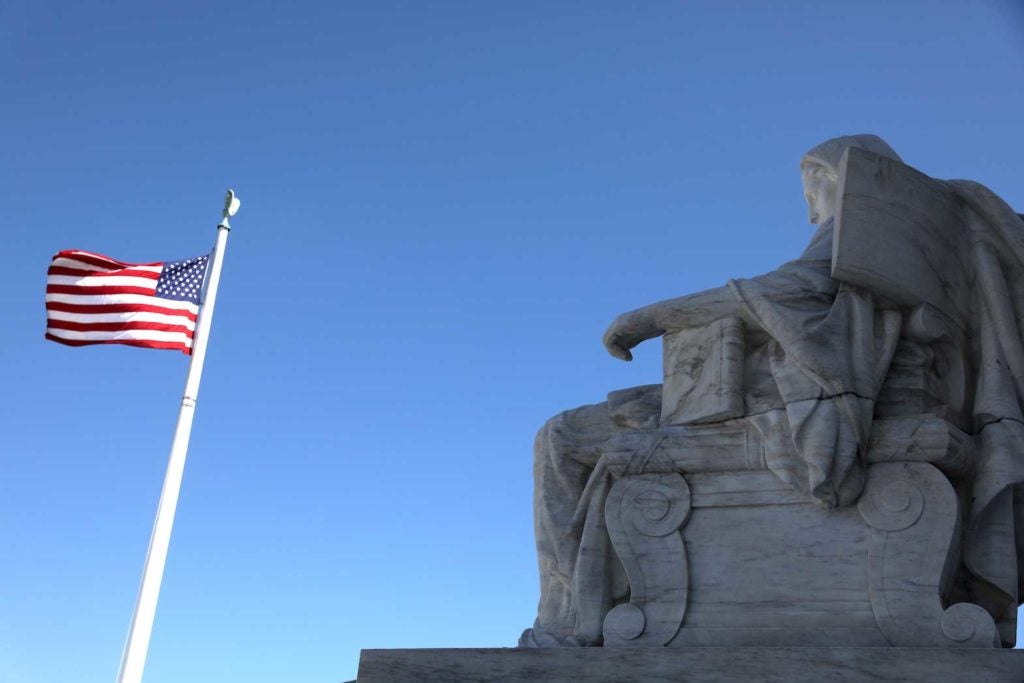 The female figure called the Contemplation of Justice is seen in a general view of the U.S. Supreme Court building in Washington, U.S. July 2, 2020. REUTERS/Jonathan Ernst/File Photo

WASHINGTON – The U.S. Supreme Court on Monday brought a formal end to eight lingering disputes pursued by former President Donald Trump and his allies related to the Nov. 3 presidential election including a Republican challenge to the extension of Pennsylvania’s deadline to receive mail-in ballots.

The justices turned away appeals by the Republican Party of Pennsylvania and Republican members of the state legislature of a ruling by Pennsylvania’s top court ordering officials to count mail-in ballots that were postmarked by Election Day and received up to three days later.

Three of the nine-member court’s six conservative justices – Clarence Thomas, Samuel Alito and Neil Gorsuch – dissented from the decision not to hear the Pennsylvania case.

Trump, a Republican, lost his re-election bid to Democrat Joe Biden, who took office on Jan. 20. Biden defeated Trump by more than 80,000 votes in Pennsylvania and the legal case focused on fewer than 10,000 ballots.

The high court, as expected, also rejected two Trump appeals challenging Biden’s victories in Pennsylvania and Wisconsin based on claims that the rules for mail-in ballots in the two election battleground states were invalid. The court also turned away separate cases brought by Trump allies in Pennsylvania, Michigan, Georgia and Arizona – all states won by Biden.

It already was clear that the high court had no intention to intervene in the cases because it did not act before Congress on Jan. 6 certified Biden’s victory. That formal certification was interrupted when a pro-Trump mob stormed the U.S. Capitol. The court also turned down motions to expedite the election cases.

Trump made false claims that the presidential election was stolen from him through widespread voting fraud and irregularities.

The case brought by Pennsylvania Republicans concerned 9,428 ballots out of 6.9 million cast in the state. The Supreme Court previously rejected a Republican request to block the lower court ruling allowing the ballots to be counted.

In his dissent, Thomas said the Supreme Court should resolve whether non-legislators, including elections officials and courts, have any power to set election rules. Thomas said it was fortunate that the state high court’s ruling did not involve enough ballots to affect the election’s outcome.

“But we may not be so lucky in the future,” Thomas wrote.

The election dispute in Pennsylvania, like in several other states, involved changes implemented to facilitate voting during the coronavirus pandemic, a public health crisis that prompted a surge in mail-in ballots as voters sought to avoid crowded polling places.

The Pennsylvania Supreme Court sided with the state’s Democratic Party and various Democratic officials and candidates who argued that an Election Day mail-in ballot receipt deadline would violate the state constitution’s guarantee of “free and equal” elections given the pandemic and warnings by the U.S. Postal Service over its ability to deliver ballots in time.

The state Republican Party intervened in the case to oppose the deadline extension. It argued that the state court usurped the Republican-controlled legislature’s authority in ordering the extension.

Pennsylvania Attorney General Josh Shapiro, a Democrat, told the justices in a filing that particularly given Trump’s repeated attempts to overturn the election result based on unfounded claims of voting fraud, “the court should not plunge itself into the political thicket by granting a case that will not affect the outcome of any election.”