Last December, Mirande Gross graduated from Bellarmine University in Louisville, Kentucky, with a bachelor’s degree in communications. But Gross has changed her mind and is heading back to school in May for a one-year accelerated nursing degree program. The pandemic that has sickened more than 27 million people in the United States and killed nearly 500,000 helped convince her she wanted to become a nurse.

“I was excited about working during the pandemic,” Gross, 22, said. “It didn’t scare me away.”

Enrollment in baccalaureate nursing programs increased nearly 6% in 2020, to 250,856, according to preliminary results from an annual survey of 900 nursing schools by the American Association of Colleges of Nursing.

“In the pandemic we saw an increased visibility of nurses, and I think that’s been inspirational to many people,” said Deb Trautman, president and CEO of the association, whose members represent nursing programs at the bachelor’s, master’s and doctoral levels. “It’s a profession where you can make a difference.” 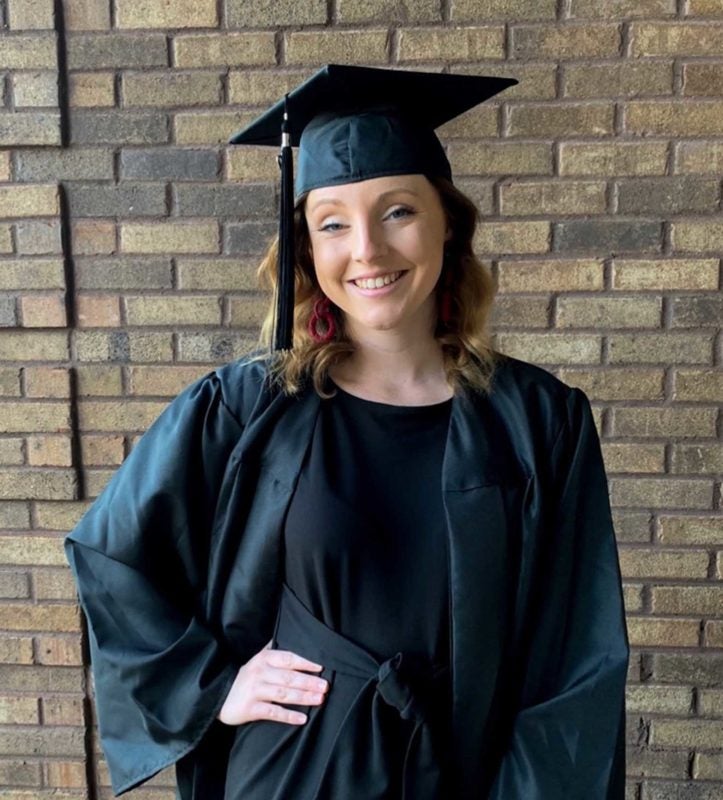 Mirande Gross recently graduated from Bellarmine University in Louisville, Kentucky, with a bachelor’s degree in communications, but she’s heading back to school in May for a one-year accelerated nursing degree program. “When I saw on the news nurses being so overworked, I thought, ‘Gosh, I wish I could be in there helping,’” she says. CONTRIBUTED

There’s no way to know exactly what is propelling the new applications. But medical schools also saw an 18% boost in applications last year, a jump partly attributed to the pandemic and high profile of key doctors, such as Dr. Anthony Fauci, director of the National Institute of Allergy and Infectious Diseases, during the crisis.

It’s possible that the media stories, social media accounts and front-line medical workers’ personal accounts of battling the novel coronavirus have played a role. “Nurse” was the No. 1 term that people queried “how to become” on Google in 2020, according to Google trends data.

For Gross, it was a turn back to an initial career choice. When she started college, nursing was her chosen path. But after fainting twice while shadowing a nurse at the hospital, she switched to a major that didn’t involve needles or blood. For the past two years, she’s worked as a newborn photographer at a hospital near her Louisville home, and she no longer gets squeamish at the sight of IVs or injuries.

“When I saw on the news nurses being so overworked, I thought, ‘Gosh, I wish I could be in there helping,’” said Gross.

Demand for nurses was strong even before the pandemic hit. There are about 3 million registered nurses in the United States, but employment is expected to grow 7% between 2019 and 2029, according to the Bureau of Labor Statistics, faster than the 4% average for all occupations. Many hospital medical staffs are stretched to the breaking point as they deal with a surge of covid-19 patients and at the same time cope with staff shortages as medical personnel have become ill with covid or had to quarantine.

Meeting the demand for nurses is hampered by long-standing capacity issues at nursing schools. According to a report by the American Association of Colleges of Nursing, programs at the bachelor’s and graduate degree levels turned away more than 80,000 qualified applicants in 2019. The reasons included not having enough faculty, clinical training sites and supervisors or classroom space, as well as budget constraints, the report found.

“The people who are prepared to teach are at least master’s degree level and frequently have doctorate degrees,” said Beverly Malone, president and CEO of the National League for Nursing. “They can work at hospitals or community care centers for [significantly] more money.”

Malone and others also noted that it can be difficult to ensure access to the clinical training slots that nursing students need. This problem was exacerbated during the pandemic when many hospitals sent nursing students home to avoid their getting sick and to conserve scarce personal protective equipment for staffers treating covid patients.

For some nursing students, the pandemic has opened their eyes to new possibilities for patient care. David Namnath is finishing a two-year associate nursing degree at the College of Marin in Kentfield, California. He learned last spring that his clinical rotation at the local hospital would be canceled because of covid.

Instead, he and other students took on a telenursing project, in which he made regular wellness check-ins and provided health education related to chronic conditions such as diabetes and back pain with eight patients over video and phone.

“It was really helpful for me,” said Namnath, 29, who has a bachelor’s degree in biochemistry and worked in a lab before starting nursing school. “It’s not something you normally learn. I think we became more three-dimensional because of it.” 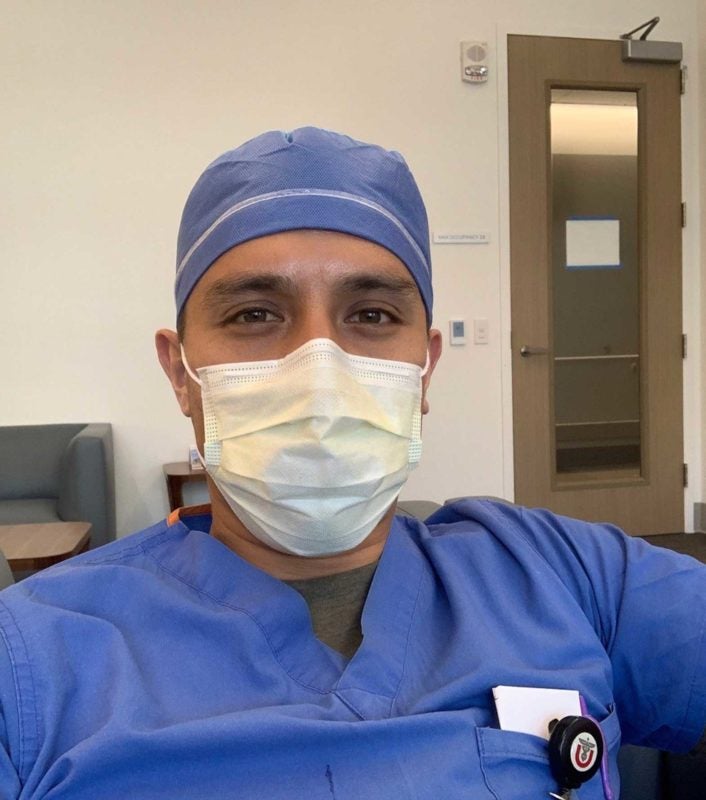 Namnath is finishing a two-year associate nursing degree at the College of Marin in Kentfield, California. When his clinical rotation at the local hospital was canceled because of covid-19 last spring, he and other students took on a telenursing project instead. CONTRIBUTED

Some people who got nursing degrees in years past but didn’t practice also may be taking a fresh look at the profession, said David Benton, CEO of the National Council of State Boards of Nursing. More than 222,000 nurses who were educated in the U.S. took the National Council Licensure Examination last year, a figure that was 5% higher than the year before, he said.

The economic downturn that has shuttered thousands of businesses may have made nursing more attractive, he said.

“We know that, nationally, services like the restaurant industry have shut down,” Benton said. “But one thing that hasn’t shut down is demand for health care.”

Nurses who worked in hospitals made $79,400 a year on average in 2019, according to the Bureau of Labor Statistics. But as the covid crisis hit and hospitals scrambled to find staff last year, nurses who were willing to travel to covid hot spots could make many times that amount, in some cases up to $10,000 a week.

There are many paths to becoming a nurse. A growing proportion of nurses get a bachelor of science degree in nursing at four-year colleges. But many still go to community colleges for two-year associate degrees in nursing. These programs are more affordable and may appeal to older students who are parents or going back for a second degree, said Schmidt.

Both types of graduates can take the nurse licensing exam and become registered nurses. But nurses with bachelor’s degrees may be better positioned for higher-level jobs or supervisory roles. They may also earn more money. According to the association of nursing colleges’ annual survey, 41% of hospitals and other health care facilities require new nursing hires to have a bachelor’s degree in nursing.

Many nursing schools have “RN to BSN” programs that enable registered nurses with associate degrees to get the additional training they need for their bachelor of nursing degrees. And numerous accelerated programs, like the one Mirande Gross will start in May, allow people to fill in their nursing education gaps in a compressed time frame.

Not every nursing student sees the pandemic as an opportunity, however. Steven Bemben worked as a paramedic in Uvalde County, Texas, west of San Antonio, during the first frightening months of the pandemic last year. Personal protective equipment was hard to come by, and sometimes the calls to transport very sick covid patients came nonstop.

“It was extremely stressful, and people were getting fatigued and burned out,” said Bemben, 33, who had been on the job for nine years.

Last October, he quit his paramedic job, and in January he started a two-year bachelor’s nursing program at the University of Texas-San Antonio. (He already has an associate degree, although not in nursing.)

When Bemben finishes school, he hopes, the pandemic will be in our collective rearview mirror.

“By the time I graduate, I’m trying to stay optimistic that we’ll be past all this stuff,” he said.