Wall Street hedge fund managers, the chief executives of Robinhood and Reddit, and a YouTube streamer known as Roaring Kitty face a grilling on Thursday afternoon from U.S. lawmakers over the Reddit rally in shares of GameStop Corp.

Some of Wall Street’s most powerful players, including billionaire Republican mega-donor and Citadel CEO Ken Griffin, will make rare public statements about their business practices during the Congressional hearing on how Reddit users trading on retail platforms banded together to squeeze hedge funds that had bet against shares of the video game retailer and other companies.

Robinhood and More Under Scrutiny

The five men have been at the center of the saga that roiled Wall Street in January prompting probes by several federal and state agencies.

With Wall Street critic Representative Maxine Waters at the helm and Alexandria Ocasio-Cortez and other progressives on the 54-member panel, the hearing promises to be firey, with tough questions for Tenev, Griffin and  Plotkin in particular.

“Once or twice a year a hearing lends itself to good theater…Thursday’s hearing is one of those rarities,” wrote Ian Katz at Alpha Partners in Washington, adding the hedge fund moguls are likely to be top targets for Democrats.

A spokesman for Waters declined to comment ahead of the hearing. In prepared testimony published on Wednesday, the witnesses generally acknowledged the GameStop saga was unprecedented, but they all said there was no foul play on their part. 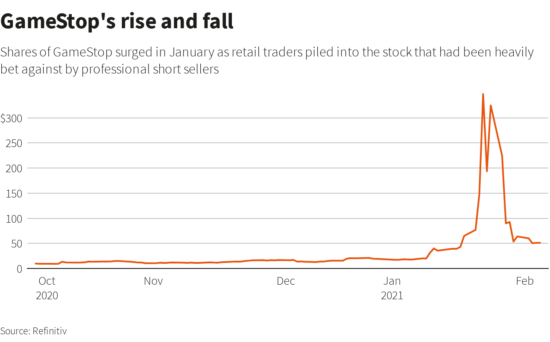 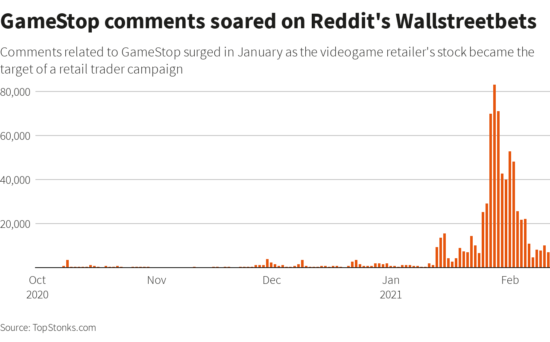 The Reddit rally drove massive volatility in GameStop and other shares, prompting the post-trade “clearing” houses that guarantee trades to call for billions of dollars in extra collateral from Robinhood and other retail trading platforms.

In response, many suspended buying in the affected stocks on Jan. 28. Lawmakers from both parties were outraged and questioned if the trading platforms were siding with the hedge funds over Mom and Pop investors.

New York-based Melvin Capital, one of several hedge funds that had bet GameStop’s shares would tumble, suffered massive losses as the stock soared leading up to Jan. 28. Citadel made a $2 billion investment in Melvin on Jan. 25. [L1N2KM064]

Lawmakers will likely focus on whether Robinhood made it too easy for small investors to take risks, said analysts. Its commercial arrangements with market makers to which it routes orders may also be a hot topic, they said, as well as whether that “payment for order flow” model may disadvantage customers.

Robinhood says few of its customers engage in risky trades, while “payment for order flow” often helps customers get better prices than trading on a stock exchange.

Tenev, Griffin and Plotkin are likely to be grilled on short selling, and whether Robinhood’s decision to suspend buying in the affected stocks was influenced by Citadel or Griffin, who majority-owns Citadel Securities, a Robinhood market maker.

All parties have denied any attempt by Citadel or Citadel Securities to influence Robinhood’s policies.

“We doubt that Washington can advance an acute policy prescription when broader concerns regarding equity market structure and economic equality complicate the conversation.”