SAN FRANCISCO- -There was no legal basis to abrogate an agreement entered into by the University of the Philippines (UP) with the Department of National Defense (DND) in 1989 as the pact has no valid exit clause for a unilateral move by either party to terminate it.

This was the contention of participants in the recent “Digital Dialogue on the Abrogation of the 1989 UP-DND Accord: In Defense of UP” hosted by the University of the Philippines Alumni Association of San Francisco (UPAASF) and moderated by board director Odette Alcazaren-Keeley.

Scores of UP alumni both in the Philippines and abroad joined the webinar. Chancellor Dr. Fidel Nemenzo provided the historical context for the 32-year accord. He was joined by Atty. Ruben Carranza, Dr. Jennifer Mijares Zimmerman and Dr. Anton Juan, who all shared their views on the arbitrary abrogation’s impact on academic freedom and civil rights. 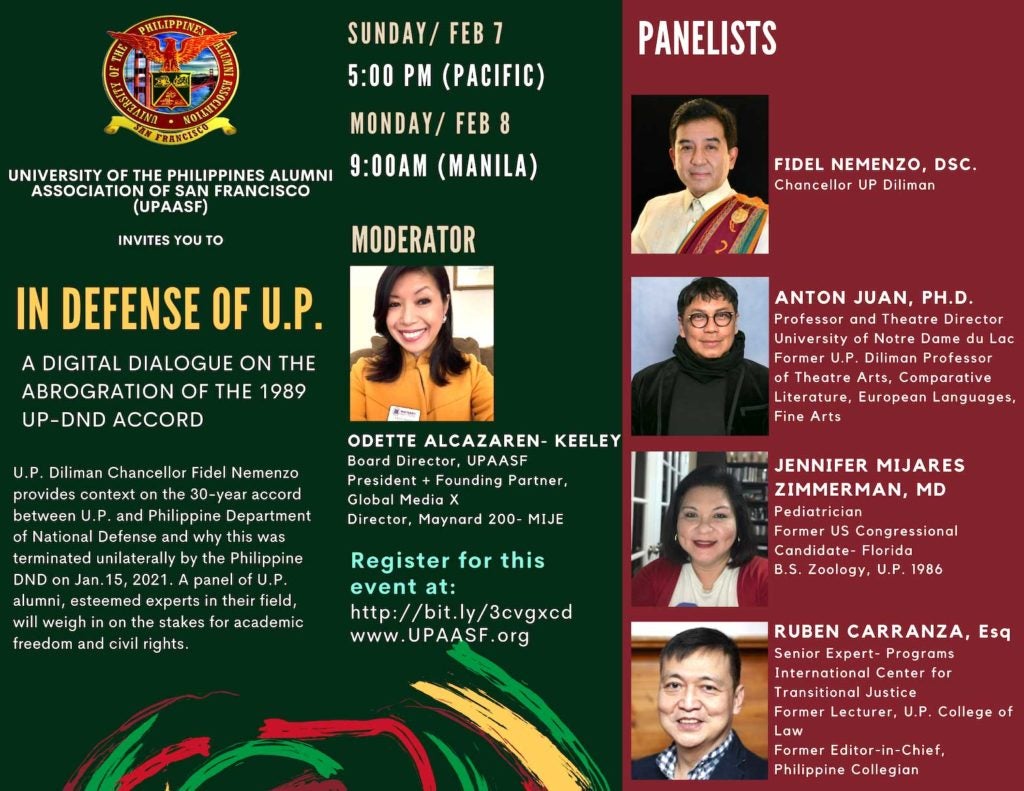 Nemenzo recalled that they were shocked on social media a Jan. 15, 2021 letter of DND Secretary Delfin Lorenzana to UP President Danilo Concepcion, abrogating the agreement, saying that it has become a hindrance to the security, safety and welfare of students and faculty of UP.

Lorenzana claimed that UP has turned into a recruitment ground and safe haven for enemies of the state, particularly the Communist Party which is waging armed revolution.

What spurred the 1989 accord was the arrest and detention of Collegian staff member Donato Continente for alleged involvement in the killing of U.S. soldier Col. James Rowe. Continente was released from prison after 15 years.

Nemenzo’s father, Dr. Francisco “Dodong” Nemenzo, was then the UP faculty regent and a signatory to the accord, which somehow eased concerns about the militarization of campuses. The elder Nemenzo remembered the talks to be very friendly

No legal basis for abrogation

“The agreement was a democratic response to the suppression of UP and all freedoms during the dictatorship. Since then, it has served as the framework of cooperation between UP and the DND and for over three decades allowed the parties to fulfill each of their mandates — on the part of UP  the promotion of learning and intellectual inquiry and on the part of military, law enforcement,” Chancellor Nemenzo explained.

He maintains that Lorenzana’s claim that UP has become the breeding ground for insurgents even if it were true, would not be sufficient ground for the abrogation, especially since the agreement has no exit clause that would allow for its unilateral termination.

On academic freedom, UP President Concepcion, who could not make it to the webinar due to a conflict in schedule, wrote the UPAASF:

”It is really heartwarming that the UP alumni are always ready to defend academic freedom, the lifeblood of the university. The Soto-Enrile of 1982 was the government’s recognition the university should be allowed to exercise the enjoyment of all the ingredients, aspects and trappings of academic life where students and faculties can think, move, and express without fear of any non-academic reprisals. For these things to exist, the government, through Enrile gave all those commitments in the Soto-Enrile declaration. Such commitments were reiterated in the 1989 Abueva-Ramos accord and the 1992 Abueva-Alunan accord.”

For his part Ruben Carranza, a former DND Assistant Secretary, regards the 1989 agreement as a balance of power, three years after the EDSA revolution, between a military “that has not yet been held accountable for its complicity with the dictatorship, on one hand, and a progressive People Power movement on the other hand.”

“And now for Lorenzana to say that the agreement is now obsolete because times have changed, is Lorenzana, in effect, saying that there is a new dictator in power? The abrogation of the agreement implies that there are people in the government who think that they can now bring back the dictatorship, the repression, even the corruption during the Marcos period even without Marcos,” Carranza surmised.

Carranza strongly insisted that campuses should be a battleground of ideas and ideologies and not a battlefield even as he asked UP constituents to demand human rights and freedom of poor Filipinos living in shanties that have been targeted by the Duterte drug war.

For her part, Dr. Jennifer Mijares Zimmerman, a pediatrician in Northwest Florida, said her UP training in speaking up for those who cannot was put to good use while providing health care for underserved population for 20 years.

Zimmerman’s desire to speak for the voiceless even prompted her to run in 2018 as the Democratic party candidate for the 1st Congressional District of Florida against eventual winner Republican Matt Gaetz, a Trump defender.

“UP has generated a lot of very strong graduates who thrived in the environment where they are able to exchange and consider opposing ideas in offering solutions to problems,” said Zimmerman, herself one of the first UP graduates after the 1986 People Power Revolution.

Dr. Anton Juan viewed the abrogation of the agreement as a diversionary tactic as government authorities are wont to do.  Juan is a University of Notre Dame du Lac professor and theater director knighted twice by the French government for his contribution to the arts and was former UP Diliman Professor of Theater Arts, Comparative Literature, European languages and Fine Arts.

An avowed NPA or National People’s Artist, Juan recalled that artists like him are always responsive to issues as they had been doing protest theater in the streets in the early 1970s  demonstrations.

“Contrary to what the military says, UP is a breeding ground of ‘devils’ as prior to the communists, devils entered UP and these devils are traitors who sold our country. UP has bred devils and heroes, but it is up to us to memorialize those who will be remembered in history,” Juan proffered. “Education should lead students into reality. Students should be allowed to be led to the vastness of the dark, of critical thinking, of political thoughts.”

On Feb. 4, talks were held by UP President Concepcion, DND Secretary Lorenzana and Commission on Higher Education Chairperson and UP Board of Regent Chair Prospero De Vera III, who also brokered the dialog.

In a joint statement, Concepcion, Lorenzana and de Vera announced, “The dialogue afforded the key leaders the opportunity to discuss the way forward and possible areas of cooperation on how both institutions can promote their mutual aspirations to ensure a safe and secure environment conducive to learning,” and that the parties agreed to continue the meeting as they look forward to subsequent talks.

Nemenzo confirmed the Feb. 4 meeting but that the parties’ statement lacked substance and simply signified the start of talks about the accord.